Converting AD&D 1st Edition Monsters (such as from, say, the Creature Compendium) to D&D 5E 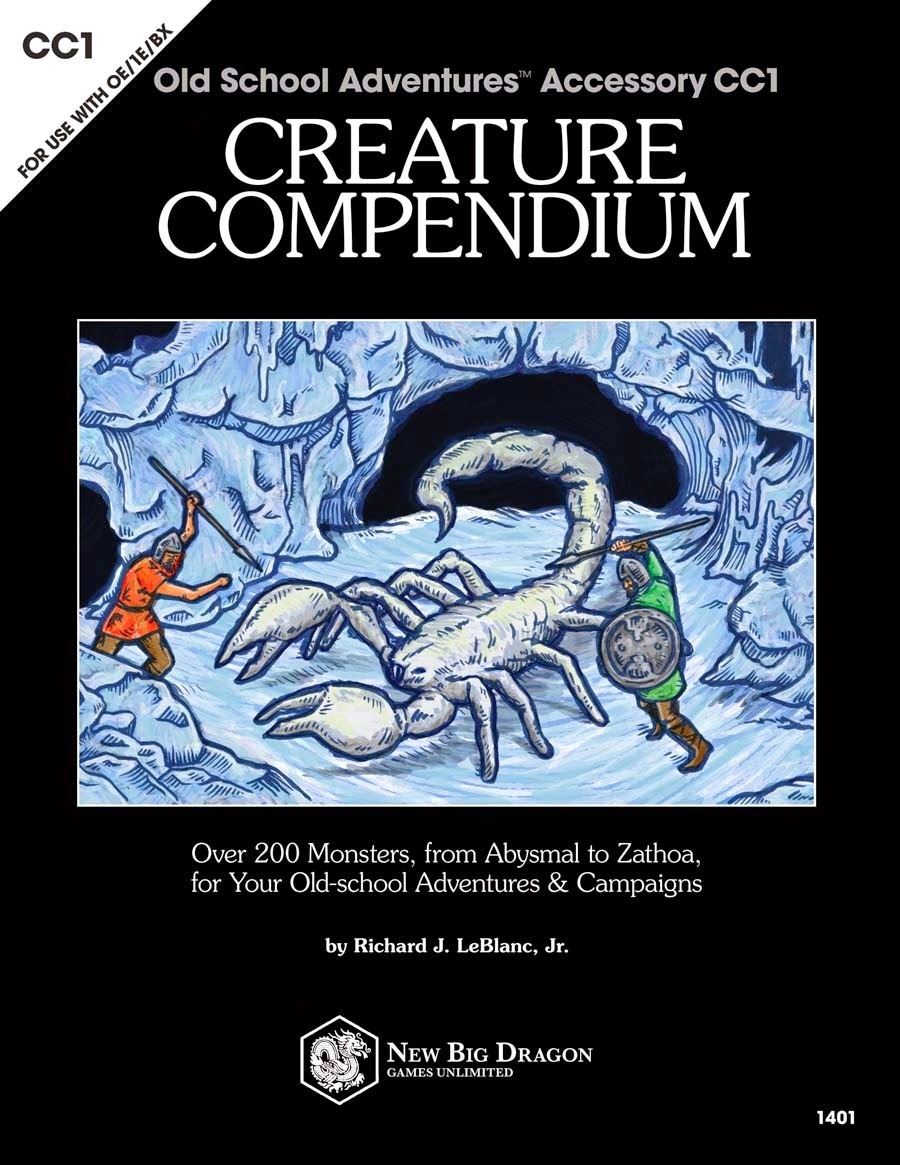 New Big Dragon Games' Creature Compendium is an amazing OSR book and one of many (Teratic Tome being a #2 on my list) that are really amazing resources for the modern classic gamer. But some of us run D&D 5E, so must we languish with our meager resources and ignore this OSR goodness? No! The conversion of classic monsters to 5E is actually pretty easy, and the rules for it are buried in code within the Dungeon Master's Guide itself.

The methodology I've worked up to convert AD&D monsters to 5th edition D&D is pretty straight forward, although a bit of handwavium and a steady application of holistic methodology is also involved.

So, here's the quick and dirty conversion guide:

Armor Class: take the creature's AD&D AC and subtract that # from 20. if it's a negative add it.

Hit Dice for Humanoids: treat the hit dice as actual hit dice, and assuming its a medium creature it has D8s. Figure out the average hit dice in this manner and then cross-reference with the hit point values on the chart to get the base CR and associated stats for the humanoid. This works best for monsters that are otherwise "humanoid" and would have normal hit dice and possibly also class levels. If you're not sure which option makes sense, compare both options for monsters and humanoids and go with the one that feels right.

Number of Attacks: turn this into multi-attack for the # of attacks indicated if more than one.

Damage/Attack: damage totals are much lower in AD&D than in 5E. Look at the damage average figured by CR in the prior step and compare to the damage output. My suggestion is to either tweak the existing damage totals until it averages something in the range of the expected CR, or to simply use a flat # based on the CR average, divided by # of attacks. Remember that the CR damage output is "total" so it would reflect the average damage of all normal attacks in the round.

Poison/Energy Drain Conversion: any save or die poison effect should be converted to damage, and can be factored in to boost damage figures above. Any necrotic effect that involves energy drain should be converted into the "hit point maximum" drain that is standard for 5E, although if you really want to go hardcore just leave these as-is, using the CR-based DC for saves vs. poison or energy drain and failure = actual level loss, death, or what-not. Just warn your players in advance so they are ready with backup characters...

Magic Resistance: converting this is really simple (since there's one default type of MR in 5E) but since I don't think 5E's MR captures the full spirit of classic edition MR I suggest instead just going with the MR as defined by the monster (so, use percentiles and the rules in the monster stat block as-is, basically). If you do that, and it's especially tough on PCs compared to standard 5E MR, then consider adding 1-2 CRs for determining the XP value of the creature.

Size: this is a "eyeball it and convert" sort of thing. Most creatures will be small, medium or large but if you think a 25 foot tall monster is huge or gargantuan go ahead and apply that. This can be used to figure out actual 5E hit dice later.

Stats: these aren't too hard to figure out, by figuring out the modifier first and then applying a stat based on that. Alternatively just assume that the creature has a single "Save" stat equal to the CR attack bonus listed on page 274 (so for example a CR 4 creature would have a SAVE state of +5). For more nuanced results use these guidelines:

Strength: If it's clearly a large creature apply a STR modifier as seems fit (and use it to boost damage dealt if you like). If there is an existing bonus to damage for large STR use that to determine the modifier. For example, Fire Walkers in Creature Compendium have a +3 damage modifier +1 due to magic weapon) so they would be STR 14 (+2). Use good judgement....CC for example only provides a +2 STR damage modifier to dirt giant attacks, but that dirt giant in the picture looks more like a +5 modifier to me.

Once you have STR and DEX modifiers figured, you can use these #s plus proficiency or the average attack (whichever is better or more appropriate) for the monster.

Dexterity: if the creature is descriptively fast adjust as necessary, otherwise, assume at least a +1 or better modifier for each of the following: initiative bonus, ambush bonus (either to cause or avoid), any thief skills, any modifiers applied to ranged damage.

Constitution: this is easy, use the HD modifier if any. Add additional bonuses if the creature has poison resistance/immunity or other notable CON-friendly features.

Wisdom: set this to at least +2 or better if the creature has clerical or druidic magic. Add +1 for each point of MDA it has, if any.

Charisma: most floaty of all when it comes to monsters add a modifier based on your gut feeling, or at least +1 or more if it appears to have some form of bard-like magic. Set this at +2 or better if the creature has any charm/enchantment effects.

Skills: don't worry about these unless a specific skill-like trait is suggested in the monster description, then set it's rank at a level equal to the determined Stat modifier plus Proficiency bonus (or just use the SAVE modifier if using that simpler rule).

Movement: take the "inches" figure and multiply by 10 to get feet per move action. So a 3" move is 3X10 for 30 feet. This will work for most conversions....mostly.

Spell Conversion: surprisingly few spells in prior editions don't have some analog in 5E, I've found. For those that don't simply crib some notes from spell conversion in the back of the 5E DMG or substitute an appropriate different spell. For Spell save DC, remember to use the CR conversion above to figure the creature's average Spell Save DC modifier, or altenratively figure the spell caster stat (INT, WIS, CHA) from your calculation above and then apply the proficiency modifier by CR.

Converting Monster Special Abilities: converting the myriad special abilities of monsters in AD&D is the really hermeneutic part of the process. Many work fine as-is, while some need some holistic massaging to convert, usually by applying the 5E mechanical application of the effect (such as poison and energy drain which I singled out earlier). On pages 280-281 of the 5E DMG a list of creature abilities can point you to finding the equivalent effect for conversion. Ultimately my suggestion is to convert those traits which have consistent mechanics in 5E, and to use unique traits as close to original as possible in other cases.

Also, remember that judicious use of the advantage/disadvantage mechanic can solve a lot of modifier issues in conversion.

Psionics: 5E doesn't have psionics but some spells like detect thoughts can substitute for psionics if needed. Otherwise do like I did when I actually ran AD&D in the 80's and ignore....

Monster XP Value: The final CR of the creature, one all of the above have been determined, can be figured by applying the logic outlined on page 275 in the 5E DMG. Don't use the CR conversion on hit dice earlier....that's just to get the base stats rolling.

Optional - Figuring Actual Hit Dice: to figure the actual hit die value of your converted creature take the average hit points you determined in the HT to CR conversion at the start, then look on the 5E DMG to figure the correct 5E hit die type by size (if you're not 100% sure of the size just use your judement). Apply the CON modifier you determined (or default to any HD bonus in the stat block), take the average hit die plus CON modifier and divide the HP average by that amount to figure the actual hit dice. Example: A CC dirt giant has HD of 8+6. From this I look up his CR as 10 and get a HP range of 206-220, and I can set his CON as 22 (+6). So in 5E he's a large (11 foot tall) monster with D10 hit dice (5.5 average per roll). So 213 average hit points divided by 5.5 plus 6 for con for a total of 11.5 (round up on this). That works out to 19D10+114 for total hit dice! Which is normal for 5E, I assure you.

So with all of that, here's a sample conversion from the Creature Collection:

The dirt giant was an easy conversion. The next one is an example of holistic conversion in action:

So....hopefully these guidelines, when applied to the monster design rules from the 5E DMG, will dramatically expand your choice of freaky denizens for delving. I strongly encourage you to pick up the Creature Compendium as well as the Teratic Tome as two great places to start with your OSRification of 5E! 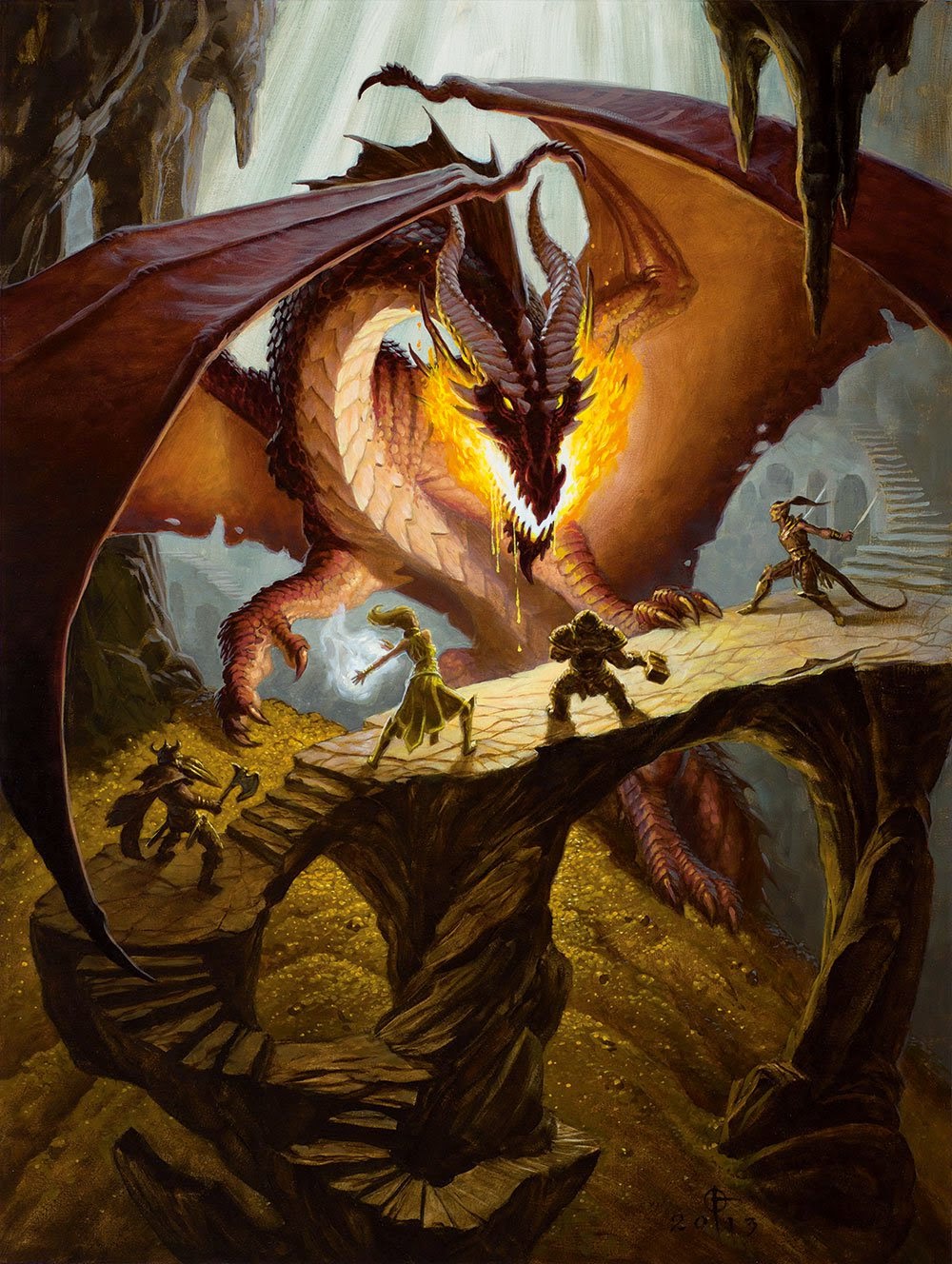