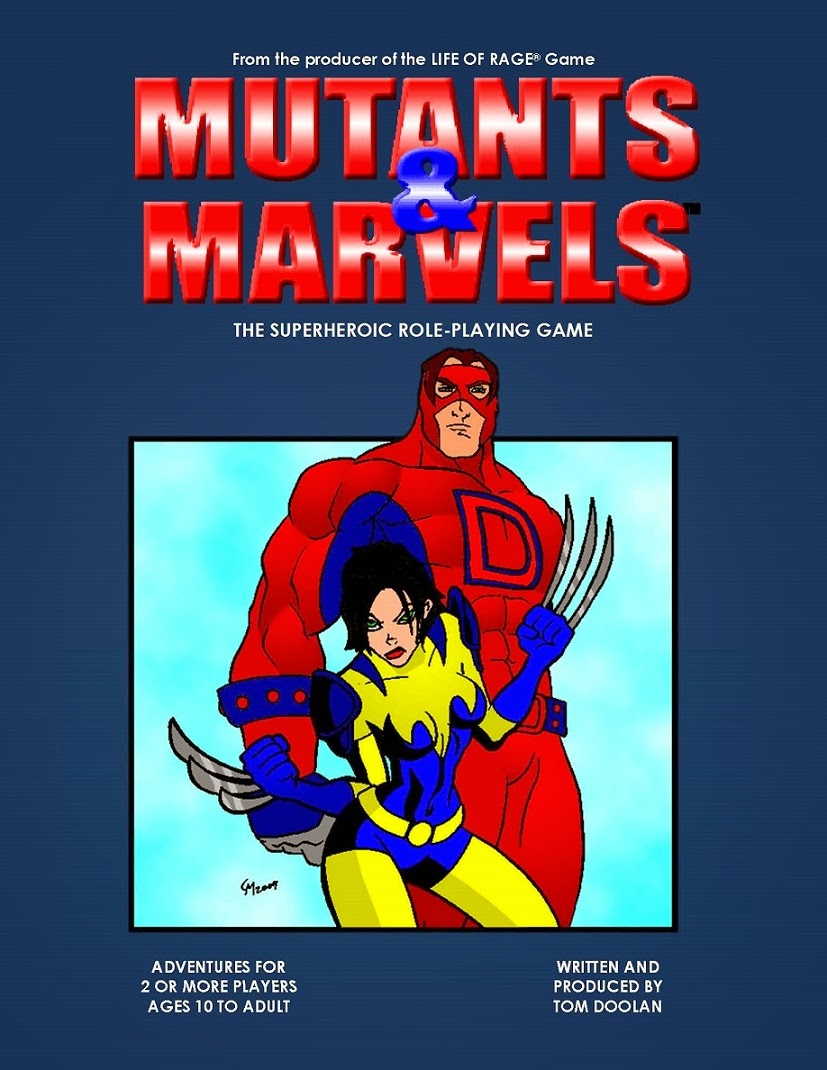 I have a lot of game systems floating around right now begging for attention….having taken a look at EGS, I thought I’d move on to another indie title, this one also steeped in a bit of the superhero corner of the OSR: Mutants & Marvels, a superhero genre RPG which takes a bit of FASERIP and merges it with the D20 roll-high aesthetic. It works rather well, and is a lot of game packed into a tiny space.

Rolling up a character in M&M (hereafter identified as not related to a similar game) is based on a “rank” purchase mechanic: you have three tiers of play being heroic (Batman, Daredevil), super heroic (X-Men, Teen Titans) and epic (Superman, Thor). We’ll stick to super heroic, which give you 25 ranks to spend.

Back in the day I used to run a lot of superhero game using the old Mayfair MEGS version of DC Heroes. I have a lot of old character concepts to draw from….I think for this one I’m going to see what Arbalest can do. Arbalest is Dan Carver, a former sidekick to Captain Liberty of the Liberty League before they were wiped out in a concerted attack by the Sinister Seven. One of several “sidekick survivors” Arbalest took on the mantle of dark vigilante to hunt down the Seven in revenge for the murder of his mentor, but he eventually realized that he had strayed from the ethos of his teacher and reformed (this happened during a major showdown with the Old One which manifested in New York in 1990). Arbalest eventually began to experience severe deterioration from the Demons’ super serum which he had stolen and used in 1989, but around 2000 he went on to work for The Nil Group which repaired the damage to his system in exchange for his service as an agent. The Nil Group is an ultra-secret espionage outfit designed to track down and contain dangerous metahumans. While working for them he took on the role of Agent 13. We’ll see what Arbalest/Agent 13 looks like in M&M.

M&M has seven primary stats: fighting, agility, strength, endurance, reason, intuition and psyche (FASERIP). These rank from -2 (feeble) to +15 (unearthly). You’ve got titles (like “excellent” for each or you can use numbers (+2 is excellent). A nice chart lets you figure out where each attribute falls in relation to a chosen rank.

Arbalest is a borderline super-human; he was a well-trained normal when he was Captain Liberty’s sidekick in the 80’s, but he underwent a super-serum treatment which he stole from the villain called the Demon in 1989 which gave him metahuman strength and speed. In 2000 when he was recruited by the Nil Group received further cybernetic augmentations and was exposed to the Lazarus Mist to undo some of the genetic “unraveling” that the Demons’ super serum was doing to him physically.  This treatment repaired the damage and extended his life indefinitely—physically he looks 30 even though in 2015 he’s technically 56 years old.

(Can you tell there’s an entire genre of gaming I love which I haven’t even touched upon in the last four years of blogging?)

Arbalest has the following stats from the 25 point pool:

That leaves 9 ranks for powers. Since Arbalest isn’t heavy on unique powers that seems reasonable….he’s more of a classic grimdark post-Miller Batmanesque type, the sort of character that would later look comfortable in an early nineties Image lineup.

Resources are also tracked on the ability chart like attributes. Although I imagine you could spend points toward resources, the game suggests that the GM determine the resources based on the character background. Since the background for Arbalest/Agent 13 is one of a professional secret agent, we’ll give him Resources of remarkable (+4; equivalent to a small corporation….this is a super-secret outfit that skims its funds off of the receipts of the Pentagon, after all!)

Next up are powers. Power mechanics are very easy (spend ranks to get powers) and some additional rules include power packages (a way to make iron man’s suit, or other powers that are linked/grouped together) and power stunts (tricky stuff that you might be able to do….like Captain America slinging his shield around, I suppose). Additional rules here include some character origins (why you have powers) and the ubiquitous sorcery rules, since comics are notorious for making sorcery and spells very hard to model in RPGs. Finally there are 11 groups of powers presented, with an additional 25 subtypes.

For Arbalest we’re looking at some super attributes (technically already added to strength), and some general physical improvements….he’s got some residual super-serum in his veins, some cybernetic augmentations which affect regeneration and give him tougher skin and reflexes. From looking at the list, I see right off that super attribute will justify his already high strength as I set it, while Damage Resistant, Armor, Regeneration and Hardened Fists are also good choices. If I have the points I might add some senses as well, since Nil Group may have cybernetically augmented his vision and hearing as well.

Here’s what I go with:

Super Attribute: this justifies his strength and agility (which according to the chart at remarkable rank he can lift one ton and has a high natural agility….dodging single bullets).

Armor: after deciding damage resistance isn’t quite what I want (it seems to be vs. energy types) I opt for Armor excellent (+3) instead for 2 ranks. He’s basically got what was called “skinweave” in  Cyberpunk 2020; nanotech in his skin can harden up with a carbon fiber weave to absorb shock and impact.

Hardened Fists: I figure that same nanoweave carbon fiber in his skin that serves as armor also makes his fists tougher. We’ll give it to him at good (+1) for 1 rank as well, but only because his main schtick is going to be with the big arbalest he carries around.

Regeneration: the nanotreatment in his veins also keeps him alive and young. I’ll give him excellent (+2)  in this. That costs 2 ranks . We have 4 ranks left to spend.

I bypass enhanced senses for a moment and move to skills. Skills include a few specific rules: you have a series of “everyman” skills which everyone receives at a base value equal to the character’s Reason score. You can then spend one rank on a skill to get it at a value equal to the linked attribute plus one. So…in Arbalest’s case, I can buy Martial Arts, Lethal for one rank and link it to his Fighting Score, meaning he has a Martial Arts, Lethal at +5.

Right off the bat he needs training in bows (arbalests) so I jam 1 rank into getting Firearms/Bows linked to Agility (since it’s a ranged attack) for a +7.

With one more rank I’ll stick it in Investigation, a skill not on the list provided and link it to Intuition, so he has Investigation +2. Not great but he needs something to reflect his role as Nil Group Agent 13.

The skill list is short: seven everyman skills, and a sampling of seven suggested skills with the basic rules on making whatever skills would fit your character. The key thing is each skill has to be linked to an attribute to get its base value plus 1 per rank spent to improve it.

After all that, a few additional topics are discussed: secret vs. public identities (Dan Carver likes to keep his identity secret, but due to a high-profile trial in the late 80’s leading to his brief incarceration his method of doing so these days is through numerous obscure aliases). Reputation by popularity and infamy is addressed as well….as a player I could argue to the GM that Arbalest/Agent 13’s reputation of infamy was from the late 80’s, and Nil Group helped wipe out much of that….so he could “restart” at zero. But as GM I’d probably assigned a couple points to Infamy because old stories never die.

Contacts and minions are also discussed (though not sidekicks curiously). Everyone gets a contact for free at character creation, so Arbalest gets one: Nil Group. Your contact is usually normal, but by spending a rank you can make it special…I’ll leave the exact nature of the Nil Group contact/relationship open…they like it that way, anyway.

Beyond that M&M talks about archetypes and identifies eight sample archetypes with some guidelines on what they do and how to make one, followed by a character example.  One thing that the process doesn’t really talk about is equipment. You can build equipment using powers, as suggested in the  power packages discussion section (making Iron Man’s armor) but not a lot of guidance on how you stat out, say, Batman’s utility belt (although I guess you could define it as a power package as well). There’s no “omnipower” such as the DC Heroes system had to fix this problem, as an example. However, the GM section does include rules on building things in the game (gadgeteering) which are very simple and boil down to: do you have the time, resources and space? If so then you can build it. With that spirit in mind, I’m going to give Arbalest his signature weapon…it’s a heavy crossbow essentially, designed originally for sieges, but this state-of-the-art edition is easy enough for a guy with augmented strength and dexterity to haul around. It’s definitely not something you’d see the Huntress using, though!

The game stats out bows and firearms but not this weapon, so I’ll make it slightly better than a bow, worse than a heavy handgun: +3 damage, range 100’, skilled and lethal traits. 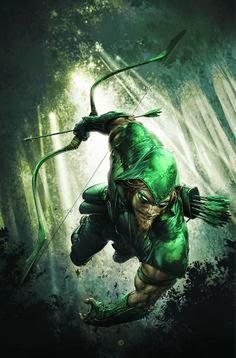 So how does Arbalest hold up in the wide world of bad guys? Stay tuned for next time, when we test out the combat mechanics (all two pages) of M&M. This is a very lite supers system, but honestly I suspect it will be a bit more entertaining to see how two super humans fare in a battle than the sad massacre that we saw in EGS previously….!
Posted by Doctor Futurity at 6:00 AM