Reviewing The Order: 1886 - Why it's one of the best games almost no one will like (updated)

I've been playing The Order: 1886 for a while now (I am roughly 5-6 hours in, around Chapter X, so I have about eight more chapters to go, I think; EDIT: finished at roughly 9 1/2 hours. Probably 1/2 an hour of that alone was reading the various newspapers in the game). Before I go any further let me clear up some general misconceptions of the game:

1. Despite the marketing for this game it is not "Gears of War with werewolves." In fact werewolves are only a partial element of the broader story. The GoW comparison...at least for the combat segments, is spot on however (but see below).

2. It is definitely steampunk. Such exquisitely crafted steampunk that it has single-handedly changed my interest in the genre from one of mild loathing to genuine interest in pursuing more info on.

3. It's storyline is actually really well done.* If someone tells you otherwise, take note that their opinions on things like story cannot be trusted. If they say "the story is great but it's all cutscenes and the game has very limited player agency," know that you can trust that person's sense of judgement. 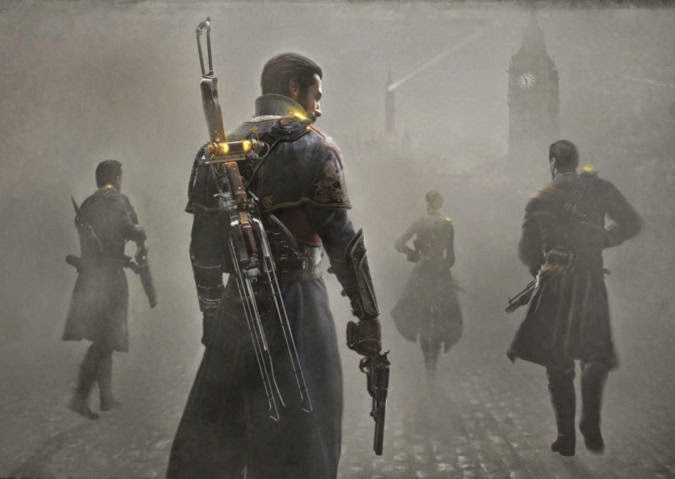 Anyway, if you've read any media on the game you can tell that most people seem to hate the game for various reasons, top three being it's got too many cutscenes, it's too short (assume 8-10 hours for a normal average player**), or it's got too much story and not enough gameplay (one person I read equated it to a Telltale game and I wouldn't say they're too far off in that respect).

However, a few people absolutely love it, especially for the staggering attention to detail the game puts into its world and story and how it weds the two together. I'm closer to this category, but I really do think The Order: 1886 deserves some of its criticism as a game, and here's why:

The Order: 1886 doesn't really know how to actually be a game most of the time, because its developers were too busy crafting an amazing story that they wanted to go a very specific direction. Paper and pencil RPGers know what this is called: it's railroading. In computer games railroads, or rather "on-rails" means you are always going in one direction toward one goal; there's no deviation from the path. In fact a majority of AAA games these days (and many budget titles) are actually on-rails, but they've learned to disguise this fact very well. The Order is no different in this regard. A better term for this is "player agency," which is how much choice the player has in what's going on. Player agency is a big deal in this era of open-world sandbox titles like Assassin's Creed, Saint's Row, Infamous, GTA V and Watchdogs. Going from any of those to a game where your choices can be as limiting as "hit square to not be knifed....okay you didn't hit square fast enough, try again until you do" is damned frustrating.

The Order only has three elements to its structure:

1. Story scenes, which occasionally start to blend with player-controlled events through QTEs (quick time events). I hate QTEs and this is one of the reasons I am annoyed with the game even though I'd rank its story A+++ and it's gunplay a solid A-. There's nothing wrong with the cutscenes in and of themselves...it's like watching an amazing movie with great actors in the best steampunk film ever. It only fails when held up in terms of volume to the other two game play styles below. Because there is a LOT of story in this game.

2. Exploration scenes, where you move methodically through the environment, occasionally finding interesting objects which you can pick up and study in slavish details with very realistic movements. This part is very immersive if you go along with it, and I am frankly amazed at the time and effort spent in rendering some of the items you can find. It shows that they were trying to go for an immersive story which was backed by its environment....and it does work, except for the part about how while moving through these environments you only ever end up going in the same direction, and a lot of players...especially players who bought this game thinking it's a steampunk Gears of War.....will be pissed at the fact that they are forced to walk through this stuff. The tempo of these sequences only works if you're a player who wants to meticulously explore these environments as you go from point A to point B. It doesn't work so well if you don't want to do that....but the game forces you to walk through it all anyway.

Gears of War had this element in its gameplay, too. It was when Marcus Phoenix was walking along talking in his radio. GoW used these moments to preface each action sequence with a 30 second monologue between characters to explain why you were going to be shooting stuff in half a minute, and had to move from A to B. The Order essentially does it for the same reason, but over several minutes sometimes. If you're busy going "wow, I want to read this newspaper and listen to that phongraphic recording" then it works for you. If you could care less.....then you're gonna be pissed.

3. The third and final gameplay element is the run and gun segments, which are tried-and-true cover-based third person shooting, a style of play that has been honed to an art. I can't say much more than that it is very smooth, although so far as of Chapter X there are moments where I wish they'd stop hurling crazed mercenaries for the East India Company at me for a minute like they were suicidal locusts from GoW. Also, I keep feeling like some of the targeting is a bit off when aiming at a guy behind cover with a bit of his body exposed. There are shots that don't work even when they look like they should. Other than that....this part is fine.

So I don't really know who The Order: 1886 was targeting. Fans of story-rich RPGs, Telltale Games and Visual Novels will love element 1 (the story bits). Fans of immersive environments and exploration for it own sake will enjoy item #2 although in truth I don't think they give us enough of this to make it feel like more than a glorified depiction of how well they can render objects and photographs in the game engine (it's very good). And for #3, the part that they marketed to, it's fun but not enough on its own merits...the first two pieces of exploration and story need to appeal.

So they made a game for me, basically....but I don't think I'm that huge of an audience, and judging by the reaction (minding that I'd only pay attention to people who admit to having actually played it....it's shocking how many people out there are trashing the game based on hearsay or from watching a Twitch recording) I'd have to say that if The Order: 1886 has a future, it's going to end up unfortunately looking a lot more like what the general audience wants.

I inevitably look forward to The Order: 1887 now with 200% more multiplayer and an open world London that you parkour through looking for exotic collectibles in exchange for achievements. If I'm lucky they will include a special loyalist edition that lets you cut out the crap and get to the story. That, or they could just make a movie. I'd be down with that.

EDIT: Final Comment on finishing the game: there's a sequence towards the end, when sneaking through lavish English gardens murdering stray East India Company men, that I found myself wondering two things: first, why is my character so bloodthirsty that his only takedown involves a knife in the spleen? Second, why is it I am forced to use a QTE for take-downs and failure means being shot? If I had been given more player agency in this game, I would not have been choosing to murder the guards (even an NPC questions why you do it), because these guys are honestly just hired mooks. That got me thinking that maybe there was something in the narrative I had missed....and in a way there was, as later reveals suggest that the evil at the heart of EIC runs deep. Still, it seemed....excessive....in the context given.

(There's also a moment....SPOILER!!! Big. Huge. Spoiler....where you meet the vile vampire behind all the stuff going on. You only engage with him in a cutscene and a QTE.....but that's okay, because honestly I realized that there was no way they could have done justice to a fight with the vampire in the GoW-based cover shooter system they were using here.)

All those stealth QTEs with a pass/fail consequence were even more annoying than the way Assassin's Creed does it, if you can imagine that! And ultimately its the devil in the details like this which will make or break a game. The Order: 1886 has the best graphics of any game I currently own, and one of the best stories. But they didn't spend enough time making the gameplay just as amazing.

*You know that common complaint that people have when playing Battlefield 4's or Call of Duty's single player campaigns? The one where they admit they have no fucking clue what's going on or why they are going through a given level? That doesn't happen here. You are so involved with the story in The Order that it takes an almost concerted effort at not paying attention or a medical condition affecting attention to be confused about what's going on in this game.

**I'm not sure if the length of time is really an issue. It takes me about 8 hours to finish the original Gears of War, for example....but yes, GoW doesn't have 2-3 hours of cutscenes so there is that. On the other hand I've played and finished GoW four times and I am still not 100% sure what the plot was, whereas I will not soon forget the amazing story in The Order. So....YMMV.

Email ThisBlogThis!Share to TwitterShare to FacebookShare to Pinterest
Labels: review, The order 1886