From the bowels of the earth, these hideous creatures are inspired by the movie "Descent," which you should check out for an example of a stealth Lovecraft film. 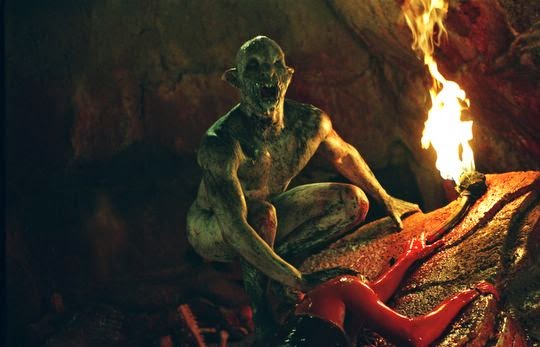 Chilopteran Man-Bats
CR 2 (450 XP)
CE medium humanoid (monstrous)
Initiative +4
DEFENSE
AC 16 (dexterity plus natural hide)
HP 27 (6D8)
Resistance: Necrotic
Immunity: chiloptera are unaffected by spells which induce blindness
Vulnerability: chiloptera take double damage from sonic damage such as Thunderwave and are unable to use their blindsense until the end of the caster’s next round.
OFFENSE
Speed 30 feet
Multiattack-chiloptera may attack twice with claws, twice with weapons or once with a claw and once with a weapon.
Melee Attack Claws +6 attack (reach 5 ft.; one target): Hit: 1D4+4 damage slashing plus the target must make a Constitution Save (DC 10) or take 1D6 additional poison damage.
Melee Attack Bone Club +4 attack (reach 5 ft.; one target): Hit: 1D6+2 damage bludgeoning.
Statistics
STR 14 (+2), DEX 18 (+4), CON 11 (+0), INT 7 (-1), WIS 12 (+1), CHA 5 (-3)
Languages: deep speech
Senses: blindsense 120’, Darkvision 120’, Perception +1 (passive 11)
Skills: Stealth +6
TRAITS
Batlike Senses: the chiloptera have darkvision and blindsense, which functions via sonar like a bat. They lose this ability if something prevents them from making their sonic “chittering” or deafens them (such as sonic attacks or silence effects). When in effect, this blindsense easily defeats invisible opponents (gaining advantage on detection) but they have disadvantage on detecting incorporeal opponents.
Light Blindness: in sunlight (or its equivalent) chiloptera gain disadvantage in all rolls.
Maddening Rage: the chiloptera are almost fearless when provoked and are hard to quell. A chiloptera that is fighting a wounded opponent may add +5 to its damage dealt but takes a -2 to its attack rolls.

Deep beneath the ruins of Pergerron and other worlds are races which have never seen the light of day, and have lost most of what intelligence and civilization they might once have had. From the subterranean catacombs beneath Samaskar to the haunted hauls of Shatan, chiloperta are a known menace, a degenerate race of bat-like men who have haunted the darkness for ages. They seem to have rudimentary speech ability, and a few may learn common, if only to study surface dwellers in preparation for rare night raids.

Adventurers who have delved deep into the earth have found hive-like communities of these creatures dwelling in ancient natural caverns, with crude ceremonial altars to some forgotten beast-god that they call the Black Mother, Shub-Niggurath. On rare occasion a death priest of the Black Mother may have enough wisdom to have 1D4 levels of cleric in her name.
Posted by Doctor Futurity at 6:00 AM