The dire reach of the corvus archos is one which any adventurer may fear, even an avian hero of the sky….. 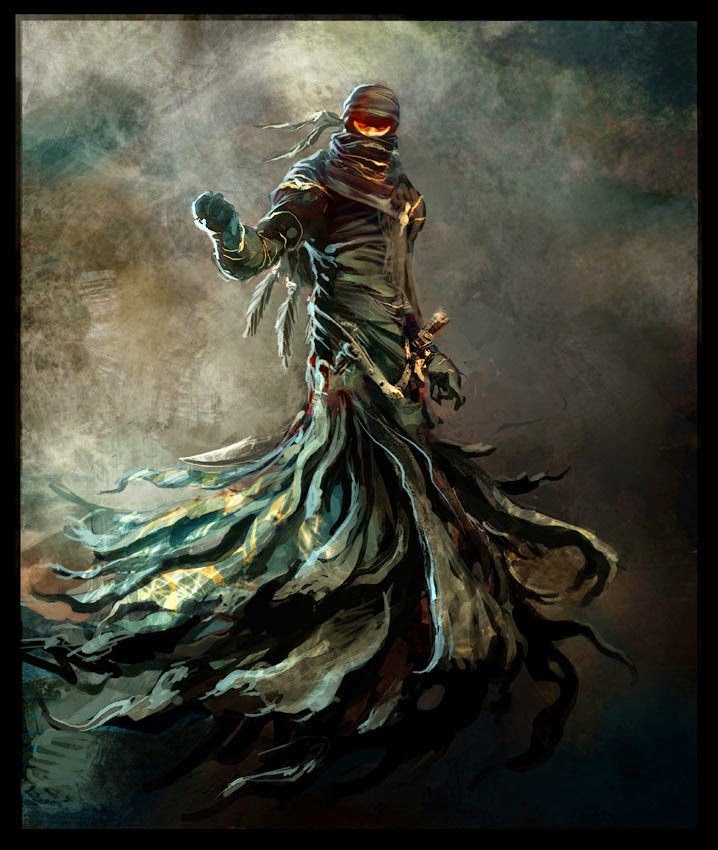 Swarm of Crows (recharge 5-6): The corvus archos can summon a swarm of ravens, crows and other large black birds which engulf a region 20 feet in diameter at a location within sight of the corvus archos. Each round he may move the swarm up to 60 feet. Any creature which begins its round in the swarm must move as if in difficult terrain, and must also make a DC 16 Dexterity save or take 3D6 piercing damage from the slashing claws and beaks of the swarm. Additionally, at the start of a caster's round who begins in the cloud, he must make a save vs. INT (DC 16) for any concentration spell in effect, and again for any spell he attempts to cast while in the radius of the Swarm of Crows. This is a concentration effect from the corvus archos, and if something that would disrupt concentration does so, the swarm dissipates into shadow and smoke at the end of the round in which the disruption takes effect.

Raven’s Disciple: The corvus archos can see through the eyes of any raven, crow, blackbird or rook within 10 miles of his position, as if he were in the eyes of the bird. He can speak with such birds with clarity and understanding when they are present and he can even whisper a message of one sentence or ten words and direct such a beast to relay the message to an intended target (which it must fly to for delivery).

Shadowflight: the corvus archos can cast fly as an at-will effect, manifesting shadow wings when he does so.

Shadowwalk: The corvus archos can as a bonus action teleport via shadow to another location within 60 feet. He may do this three times per short rest (encounter).

The corvus archos, sometimes also known as the raven lord or the crow lord, is an enigmatic denizen of the shadowfell who occasionally makes his way to the darker corners of the mortal realm to sew havoc. He is a tall, gaunt figure shrouded in darkness and usually wearing a cloak with ravenlike features or elements, who can extrude dagger-like blades from his forearms and hands and has a distinct prowess in the longbow.

Some have suspected a connection to other denizens of the plane of shadow such as dark creepers but none can say for sure. There is one theory that the native plane-dwellers of the shadow who worship Morrigan, the Raven Queen, manifest as the corvus archos when their priestly devotion reaches a certain point, but it has been remarked that precious few ever seem to exhibit any dedication or reverence for the dark goddess. Some believe the crovus archos is what happens to a shadar-kai who has lived too long and lost his ability to suffer, causing him to transform into an entity which must of necessity seek the suffering of others.

It is known that they can be bartered with, and while they tend to remain loners, on occasion packs of the beings have been encountered, especially in the shadowfell. A famous incident in Gloomwrought recalled by a dark dwarf of that town told of the day baron Vasghras took over; a horde of corvus archos descended on the town and slaughtered all who opposed the baron in his bid for control. Afterward, one particularly notorious corvus archos called Ember Eyes was seen taking a princely payment from the mayor.

Corvus archos can manifest a flock of crows and ravens out of shadow as part of their ability, and they delight in harrying foes at a distance with this trait while using lesser minions to close in on their targets. They strongly favor their barbed arrows, which are always laden with poison.

For reasons entirely unknown the corvus archos takes special delight in hunting the avian humanoids of the mortal plane, especially the tengu, and aarakocra.

Corvus archos are armed with +1 longbows and wear +1 magic leather armor. Their arm blades are magical, but are fused with bone and flesh along their arms, as if they wear flesh-grafted cestii and daggers; they can “flex” to retract and extract the blades as if drawing a weapon.