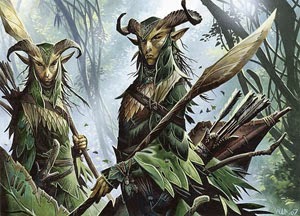 1: A warband of ibixian goatmen. The ibixians will appear in either a small or large group (50% chance of one or the other). The details are as follows:
D6/Result
1-3: Small Warband: There will be 2D4 ibixians and a 25% chance of 1 warchief and a 10% chance of a shaman. The ibixians will feign friendliness or neutrality until they have assessed whether the party is an easy mark, then position to attack when they feel they have won their trust.
4-6: Large Warband:There will be 4D6 ibixians, 1D2 warchiefs and a 50% chance of 1D2 shamans. Unless the party is obviously stronger than them in terms of numbers or visible ferocity (i.e. the party contains demons, or is mostly tieflings, which ibixians all think are demons anyway) then the warband will attempt to surround the party and cow them into surrender, placing them in chains. Failing that they will beat the party into submission and chain them as slaves, then demand the party lead them out of the wood in exchange for freedom (which they won’t likely honor). They will flee if an attack leads to a 40% or greater loss in the first two rounds of battle. 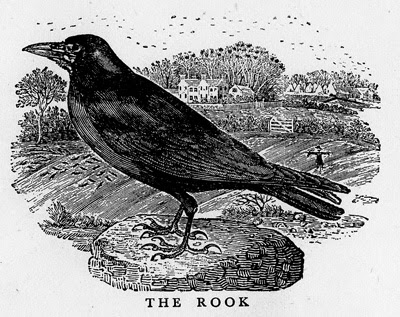 2: The Black Rook takes an interest in the party. If the party contains a greater percentage of neutral or evil characters (fewer “good” characters than evil) then the Rook will seek to capture their attention and lure them toward the lair of Aruman (see Encounter 20 below if they follow him). If the party contains more good than evil/neutral characters then the Rook will lure the party to the wide open grove of one of the following (roll a D6): 1-2 the Hydra’s Tree (see Entry 19 below), 3-4 a Haunted Grove with a 100% chance of 1D3 demonic treants (Entry 4) or 5-6 the Mark of the Spear (Entry 18). 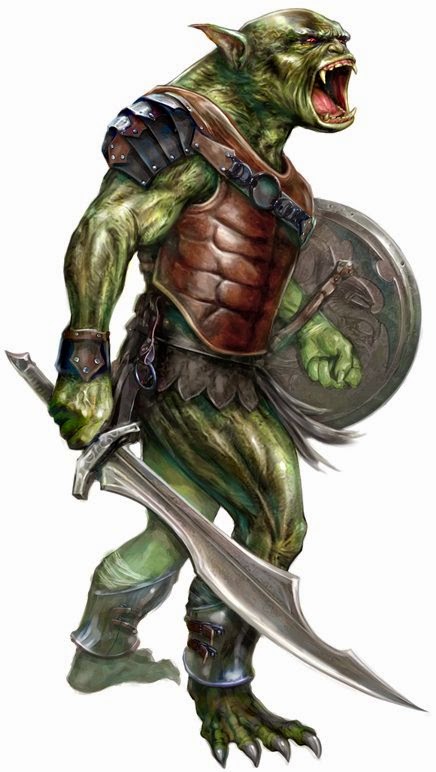 3: Wastrels and Lost Travelers. The Vosjin Wood often tempts and lures hapless pilgrims, travelers, mystics and madmen  into its clutches; there are in fact many ways into the wood other than the known path from the Hill of Giants….but without the guidance of a tymardiae of the “interest” of the shadow in the woods there is usually no chance of stumbling across such paths, until it desires you to do so, that is…Roll on the subtable that follows for the nature of the lost travelers (1D12):
D12/Result
1-3: a warband of orcs (2D8) who are trying to cut through the woods; 50% chance they have a Tymardiae guide to lead them, 20% chance that guide skipped out due to abuse and left them in the woods
4-5: 1D6 or more wraiths manifest in the night and attack, screeching with fury and speaking an ancient dialect of old men; they are undead formed from the corpses of men touched by the madness of the Balck Obelisk.
6: An outworld incursion of 1D6 or more Cyclopes wanders upon the party; Roll a D6: 1-3 they are friendly and seek to trade; 4-5 they are looking for the Black Obelisk for a ritual they must conduct; 6: they are following the call of the Black Rook.
7: A group of 1D20 pilgrims comes across the party. They are a mix of different species, but all seek the glory of either (D6); 1-3 the Temple of Hox-Nagor, 4-5 the power of Mt. Sahambla, or 6 the Black Obelisk. There is a 20% chance 1D6 of the pilgrims are clerics of 1D6 levels experience.
8-9: a band of rogue bandits (3D6 brigands and 1D3 leaders) trapped in the woods and seeking escape. These may be bandits from the region of Samaskar, but there is a 20% chance they are actually from a distant land and don’t even speak the local language. They will react to the party according to perceived strength in numbers.
10: A group of 1D6 hill giants are marching through the woods hunting beasts. Adventurers are fine beasts.
11: A caravan out of Samaskar or another city is trapped in the woods. The caravan leader is a dour soul with some occult understanding who realizes what has happened, but he is doing his best to put a god spin on it, hoping he will find a local guide to assist in their escape. He does not realize that one among his hired crew is actually a warlock or witch who has drawn the ire (or interest) of either Sukagra or Aruman for an ancient spell tome that they carry, and that is the reason the forest grabbed them on their journey. The caravan has been trapped for 2D6 days (doubles add and roll over on this) and if they term of entrapment is more than 10 days then the crew is starting to look haggard, worn and mutinous. He will beg the adventurers for aid in escape.
12: Aruman is wandering and looking for herbs and material for his alchemy when he stumbles across the party and puts on his “best face” to talk to them; will invite them back to his villa if they are friendly, or will call up 2D6 wraiths of the woods to aid him in battle if they attack. 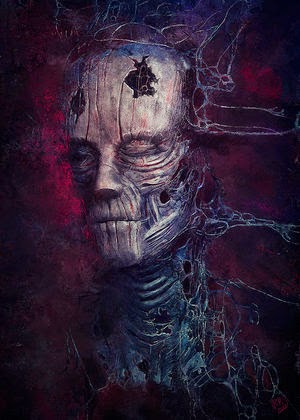 4: A Haunted Grove. The party comes upon a thick grove of trees that are twisted and misshapen to resemble tortured humanoids, as if the bodies of men are locked up in the woods. This is a common sight throughout the forest, but something about the grove feels particularly concentrated and evil. Any attempt to find a way around the haunted grove is rolled at disadvantage against D20; a DC 15 insight check suggests that the grove feels like it is willfully manipulating the woods and path to force entry into the grove.

Haunted trees within the Vosjin Wood are described above, but this grove is especially vile, containing the trapped forms of demons that served in the blood knight army of Sar. The trees have become animated, and eagerly seek to slay any who enter the woods. 85% of these are awakened trees and a grove typically contains 4D8 of them, but 15% that 1D3 will be corrupted treants, roaming the woods and lurking in haunted groves waiting for victims. These possessed awakend trees and treants function like the regular monsters, but there is a 50% chance with each physical attack that they deal damage with that they will heal as many hit points of damage as they dealt with the attack.

It is possible to awaken the demon spirits within the trees; a tree which has slain a victim has a 5% chance of being able to possess the body of the slain victim, inbuing the body with its own demonic spirit. The victim will appear to return to life, but the demon’s mind will be the animating force. The body will slowly and disturbingly transmogrify into a random demon type within 1D6 months.