Encounters in the Vosjin Wood: Entries 13 through 16 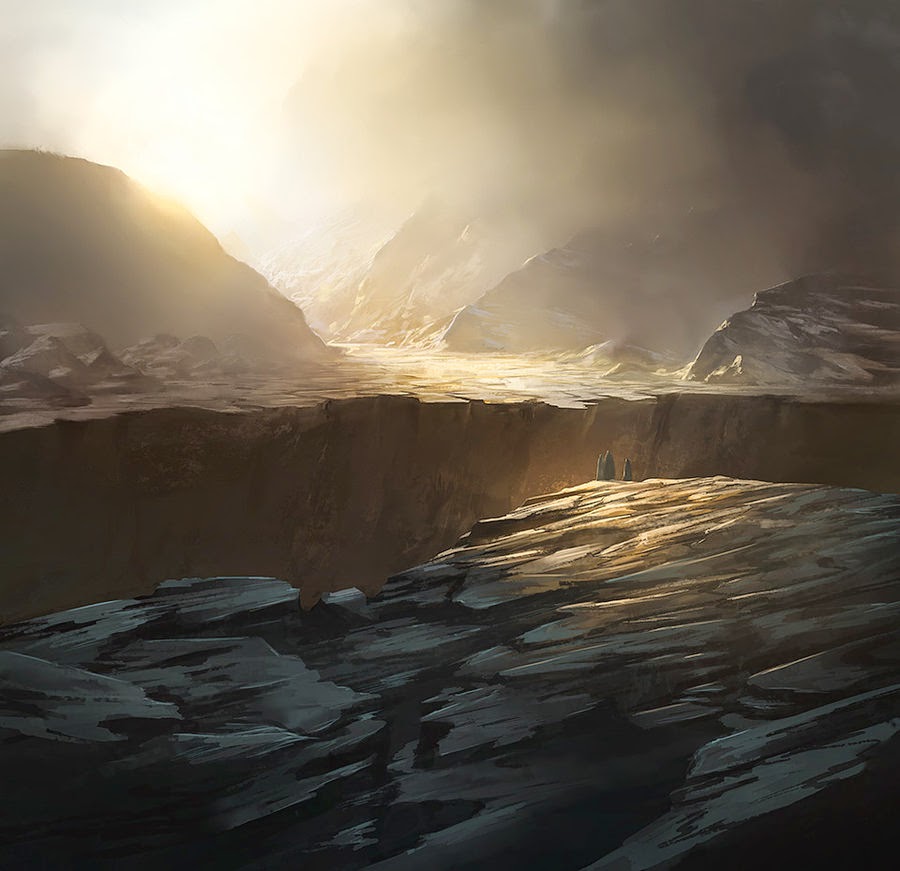 13: The Chasm at the Base of Mt. Sahambla. It is normally very difficult to find this without the guidance of either the Black Rook or the White Stag. The chasm isn’t terribly formidable: it’s a 10-20 foot gap at any given point, possible for an enterprising adventurer to jump or otherwise make it across (although falling in is a bad idea; the chasm is infinitely deep, and may eventually open up into the plane of Limbo). What is ominous is the immense mountain lurking on the other side. Mt. Sahambla is only ever visible from a distance, as if it’s always “over there about 50 miles” when moving through the woods, for those who climb tall enough trees to spot it….a single great mountain in the distance. The mountain is already ominous because it does not exist anywhere outside of the wood. No one can see it until they are actually in the Vosjin Wood. But once you have found the chasm….then you are suddenly not only able to see the mountain, but it is right there, the steep slopes and cliffs visible just dozens of feet past the chasm itself. The sense of presence of the mountain is overwhelming.

Once across the chasm one may discover a lost primordial temple, though there are likely many more secrets to be found on this mountain which exists coterminously in the Outworld and the mortal plane.

The Temple of Sahambla: the base of the mountain includes a vast stretch of sheer stone cliffs stretching up for several hundred feet. At the base of this cliff lies a secret door hidden with primordial runes that glow only on nights of the full moon. The passage will open for true believers on these nights, or those who have special sight (such as detection of secret doors) if the runes are read: a prayer of humble submission to Sahambla.

Once open, the passage reveals the depths of a great subterranean temple and dominion. A vast descending staircase in an immense cavern reveals a lost elven court and temple, and at the center lies a dais on which rests the primordial Iron Sphere of Sahambla. Guarding the sphere are two gear maidens, with many more in the depths of the vast temple complex. There are also undead elves in the area, including ghosts of the old priests and librarians of this dominion, though most are merely sad at their existence and have no ill feelings….they would be laid to rest if the temple were ever restored.

The Iron Sphere is a lost artifact of great power. On occasion the White Stag will guide prospective candidates for this artifact to the chasm in the hopes they find the temple and come to possess the Iron Sphere. Those who survive the discovery may become the Voice of Sahambla, a means of restoring the lost cult of the banished primordial to the mortal world.

The Iron Sphere of Sahambla requires a DC 17 constitution save to even hold (elves gain advantage on this save); failure means the person attempting to grab the sphere is subject to a petrification attack, and if he fails the save by 5 or more is petrified immediately. If failing by less, the save is made next round and if failed then the subject is petrified; the gear maidens will shattered the body and restore the Iron Sphere to the dais.

If the adventurer overcomes the challenge of picking up the Iron Sphere then he experiences some changes: his skin will default to a metallic state and he now functions as if wearing adamantine full plate armor henceforth (will not stack with existing armor). As an action the bearer of the sphere can will his flesh to reappear, but this requires concentration to maintain normal skin.

Beyond the temple chamber of the orb is an extensive but unexplored remnant of the temple which links to a vast abandoned subterranean city, in which there may still be denizens of unknown nature.

14: The Yawning Chasm of the Outworld. Adventurers can on occasion stumble across one of the planar rifts which link the Vosjin Wood to the Outworld. The adventurers will suddenly find a break in the woods, opening up to a wide chasm, usually 5-100 feet in width (roll 5D20 for the number of feet across). Beyond the chasm is a vast plain of desert scrub stretching as far as the eye can see, in a deep cerulean and purple sky with no visible moon, sun or even stars. There is a 10% chance a bridge may be visible allowing easy passage across (though if the adventurers are employing a tymardiae guide he will always take them to a location with a safe bridge to cross).

Moving beyond the chasm to the plains beyond puts the adventurers in the Outworld, about which more will be written in the future. Here lie the ruined cities of the primordials and their ancient tomb-prisons, as well as mysteries of incalculable nature. Wandering too far can make returning to the Vosjin Wood difficult….but Mt. Sahambla is always visible in the distance, and easy to reach in the Outworld. The chasm here will eventually connect to the chasm that runs the length of Mt. Sahambla, and so serves as the best navigational beacon for those who dare to explore Outworld. 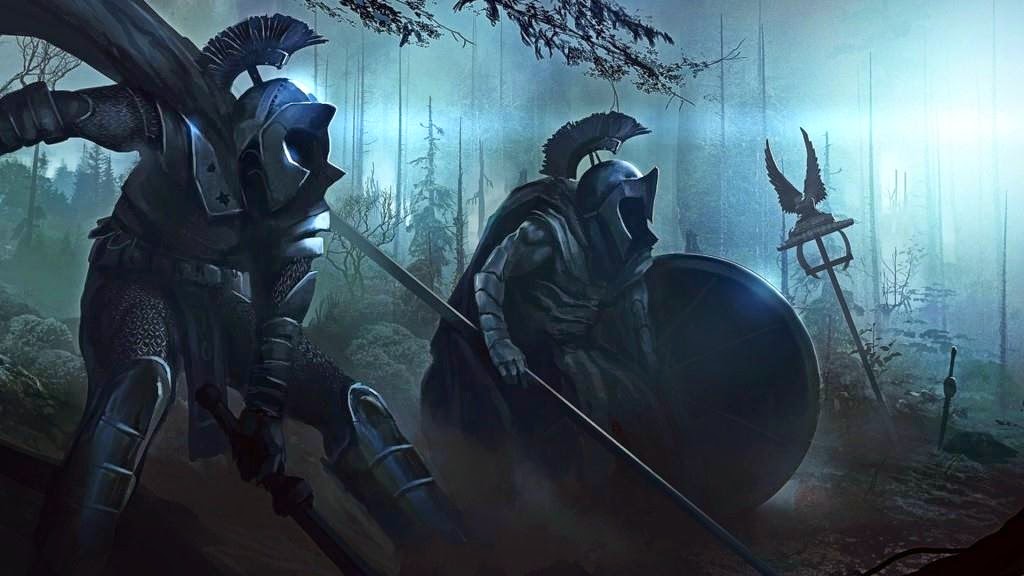 15: The Spectral Fields. Here lie the bodies of thousands of warriors who perished in battle before the matter was settled by the wrath of the Enkanneth. The fields initially appear bare of any distinct features except for an absence of trees and thick grass. As one moves through the fields, bones become visible, remnants of rusted armor and weaponry, and soon enough it is clear that an ancient battlefield lies beneath the adventurer’s feet.

By night the battlefield becomes a haunted landscape as wraiths, ghosts, specters and worse manifest and re-enact their final moments, over and over again. Interrupting this process, even by accident, will earn the dire enmity of the undead. Moving through the field during a spectral event requires good grace (Dexterity check DC 15) each round to avoid stumbling in to one of the dead’s pantomimes.

Should the battle be interrupted, 3D6 wraiths, 1D6 ghosts and 4D4 specters as well as a 50% chance of 2D6 shadows may be in the immediate area. Initially 1D3 undead will be interrupted by a stumbling adventurer, but each turn of combat another 1D3 may be drawn in as each round all parties must make Dexterity checks to avoid further interruptions. 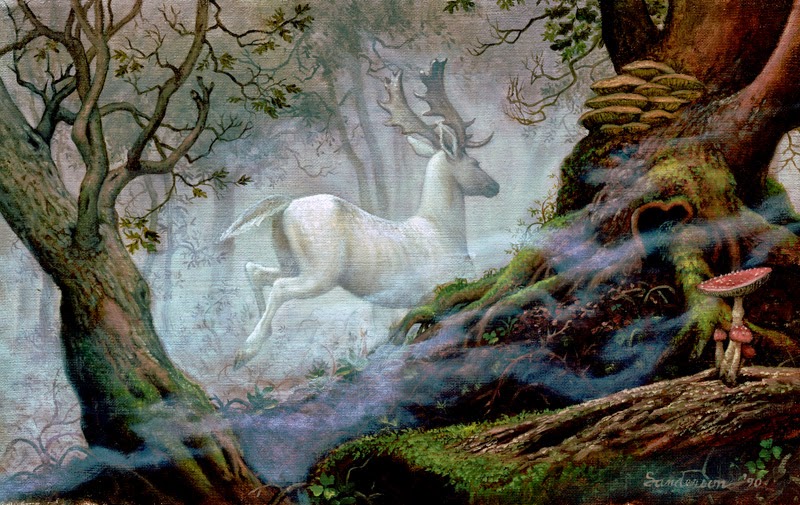 16: The White Stag. This spirit champion of the Vosjin Wood reflects a purity of spirit and a balance of goodness. It is in many ways the embodiment of the goodness that lay within the elves of Sar, even as they fell due to the corruption and lost ways toward the end of their empire. The White Stag is also an avatar or servant of the primordial Sahambla, and will on occasion seek to guide travelers to the base of the mountain (entry 13) to aid them in finding the lost temple of the primordial. The White Stag can take pity upon those who have no wish to be here, and will lead them to escape the woods as well. Just as likely if it happens upon evil men it will lead them to their doom, usually a creature from entry 17, Caldare’s lair, or even worse.

The White Stag is a means (like the Black Rook) for DMs to lead the players where they wish, but if it is purely a random encounter then the White Stag will react according to the predominant alignment of the group. When encountering the White Stag, adventurers of good nature will notice it immediately, but evil characters must make a DC 12 insight check to spot the stag. Any efforts to hunt it will prove difficult, for it appears the stag has no physical form (but if somehow tricked into the Outworld it becomes a normal stag while there; if killed it will reform in the Vosjin Wood). The White Stag does have a physical form, but it is protected from harm by the spirit of the wood. There are rumors that Aruman has crafted an arrow which can kill the stag, however.