This is a short module/outline that I worked up in case I needed a filler scenario for my regular night. It's sort of turning into a mini-treatment of a corner of Pergerron not yet disclosed, however, so I may focus more on this in days to come.

Unlike much of what I present, this is actually written in a "scenario" format with some encounters outlined. I'll work on the journey to Maradraes next week.

PRIMARY PLOT: In my original script the Adventurers have been hired by Kras Zenodar, an Anansic merchant, to travel to the coast of Galitath in search of the hermit-mage Aladonsis Gedar. He needs them to present the hermit with a sealed scroll that has been magically warded from prying eyes. However, for purposes of this plotline the adventurers only need to be arriving in the port for any number of reasons, including as a simple stop-over en route to another adventure.

SECONDARY PLOT: The adventurers will be landing in port Kadantir, in time to find the town under attack by vile forces!

Key Foes:
Warlord Grochas: The Ibixian Warlord Grochas has conquered a region of the southern Bramblewood and claimed it for his own, attacking the local jackalweres and gnolls and subjugating them to his rule. There are only a few ibixians, but they have dominated they local monsters already, thanks to information from bullywug allies.
Spymaster Kensas: a bullywug spy and current “chieftain” of his people, Kensas was the one who opened the gate to the Outlands that let the ibixians in. He has lured the goatmen into doing what he wishes. Kensas is a bullywug wizard, and has grand visions of riding on Grochas’s coat-tails to victory.

Port Kadantir Statistics:
Location on the Map: where the Sullen Sea and the Askofar Mountains meet; the vast stretch of coast and the length of the mountain lowlands are a dense thicket of swampland and trees from the Bramblewood.
Race Relations: Harmony
Ruler’s Status: Lord Valgarin is a feared tyrant in this town; an Anansic northman expatriate
Notable Traits: Kadantir has been the site of many battles between the monstrous tribes of the land and human colonials of Anansis and Mesutin. It has exchanged hands between Mesutin, Anansis and Galitath on multiple occasions.
Known For: strong Anansic patriotism and excellent local mines
Current Calamity: aside from the incursion of invaders, Kadantir has suffered from rising flood waters for several summers and most of its harbor region looks like a venetian canal system. It is nestled along the coast between the southern stretch of the Bramblewood, which in this region is a vast and murky swamp.
A Couple Taverns: The Laughing Stag and the The Drunken Dolphin are two famous local taverns.

#1: The Siege of Port Kadantir

The PCs have arrived at this remote Anansic settlement via the intrepid longship Hidden Glory, piloted by Captain Rohan Austemere (LN human fighter L6) and his first mate Eliza Gotares (LE 1/2 orc rogue L5). It’s been a three week journey with increasingly frigid waters. En route to the port the PCs pass a vessel which signals that the harbor ahead is under attack.

On arrival it is clear the small port is under attack. Two ships are sinking in the harbor as the ibixians, and three more ships are trapped.  gnolls, jackalweres and bullywugs lay siege to the town. Victory can be had if the War Keep is seized….but it looks like the attack by the monsters took the defenders by surprise, and the keep has fallen into the monster’s hands.

Part one: The party arrives in port, where the docks are under attack. Lord Valgarin and his family are trying to escape to their vessel before the beasts wind up the great siege ballista in the tower to sink it. They’ve already holed two ships.
Foes: on the docks a group of bullywugs, gnolls and jackalweres under an ibixian commander.
1 ibixian (450 XP)
8 bullywugs (25 XP each for 200 XP)
1 bullywug fighter level 5 (200 XP)
1 bullywug wizard level 5 (450 XP)
2 jackalweres (100 XP each for 200 XP)
2 gnolls (100 XP each for 200 XP)
Total XP 1,700 (3,400 XP total: a hard encounter for 4 level 5 PCs)
Treasure: 19 gold pieces, 60 silver pieces, and the ibixian is wielding a Great Club +1 (property: hungry quirk), a potion of healing. The bullywug fighter champion has a +1 long sword of behir slaying (deals +3D6 damage to behir).

Part Two: Lord Valgarin will be pleased at being saved, but his commander Goshin will ask the PCs to help him retake the tower. Commander Goshin has a cleric of Katas with him named Esavia who can heal the party. He knows a way in through the drainage grates at the base of the tower, which can be reached along the shore with a DC 15 sneak check. Getting in is easy….but inside the sewage drain is a troll guarding the path!
Foes: A mutant troll (Fifth Edition Foes) and three bullywug henchmen.
1 two-headed troll (2,300 XP)
3 bullywugs rogues level 4 each (100 XP each)
XP Value: 2,600 XP total
Treasure: 171 GP on the troll and 52 SP on the bullywugs plus a scroll of Fireball that they were using to threaten the troll with.

Part Three: The hike to the top of the tower is easy enough but the PCs who push must make Constitution checks (DC 15) or be fatigued when getting to the top. The signal tower and the massive war ballista are under the command of a gnollish strike force led by the bullywug eldritch knight Yamas Getata:
Foes: 1 bullywug leader and 8 gnolls, plus 1 gnoll fang of yeenoghu  (XP 2,350 XP)
Treasure: the bullywug has 35 EP and 11 PP, the gnoll fang has 50 PP, and the gnolls have 72 GP. Yamas Getata has a shortsword +1 of Human Bane (gains advantage on attacks against humans) and a scroll of fireball as well as a potion of invisibility and two potions of healing (4D4+4).

Aftermath: Liberating the tower and the ballista….then using it against the attackers directly….will cause them to break rapidly and flee to the mountains. Lord Valgarin will feel indebted to the PCs, but surprisingly won’t offer more than his appreciation. He will hold out on any suggested reward, implying the PCs are not done with their duties until this warlord “Grochas” is slain. Captive monsters will readily cave and say that Grochas is now in command, having slain the jackalwere and gnoll leaders, and he is operating out of the old ruins in the ruins of Maradraes, the so-called “Fortress.” A bullywug of note may mention that a great glowing "mirror" has become the center of the ruins, and it was after this was activated by his chieftain Kensas that the goatmen showed up.

Finding Aladonsis Gedar: it turns out the last known location of Sir Gedar was in the ruins of Maradraes, where it is said he was studying the mysteries of the ancient lost culture of the south-eastern Askofar Mountains, a people he said were the Astrakania, a race of men who interbred freely with dragons to create the draconian halfbreeds of the world. But that adventure will be for another future post... 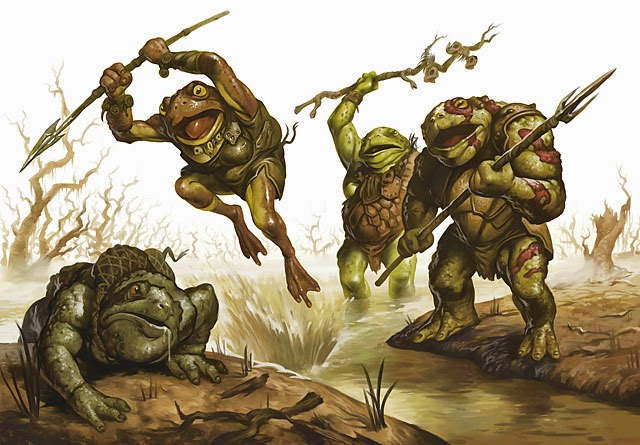