The Long View: Dungeons & Dragons and the Family 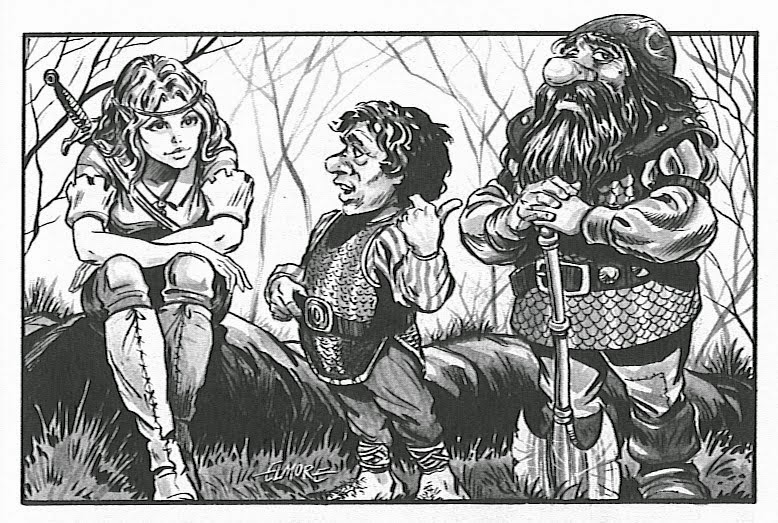 Last year a few of you may recall that I was working on a lot of B/X D&D content, pretty much right up until D&D 5th edition came out and beat its way into that dark corner of the mind where my favorite game system likes to reside, evicting many (like Pathfinder) in the process.

Surprisingly, the Basic/Expert D&D set did NOT get evicted, even if it has been ignored (at least on the blog). I've got big plans for it.....specifically, big plans for it and my family.

If there's one thing RPGs have gotten worse at over the years its providing a meaningful gateway for young audiences. It's entirely possible to do this; I have cohorts who run contemporary editions of the game for younger kids and it seems to work fine, but chiefly I suspect because adults are involved and working to get those kids into the game.

When I was about 9 or 10 years old I discovered D&D the old fashioned way, in fact one of the few ways you could do so in the late 70's and early 80's: by accident. It didn't even get played at first....D&D languished on a shelf while my sister and I begged my father to teach us to play. Ironically we were playing the Dungeon board game to death at this time. A few months later I found a copy of Gamma World on my own and that was (for reasons I still can't quite pinpoint) the RPG that "clicked" for me. After running Gamma World I suddenly knew absolutely how Basic D&D worked and found my copy as quickly as I could to start running it.

This experience has probably clouded my judgement decades later as a father, with a son who at 3 1/2 is exhibiting all of the imaginative tendencies of his mom and dad, and a clear appreciation for games. I figure he's probably only a few years away from wanting to play D&D, and much as I taught my seven year old sister to play the game when I was nine, I figure I can teach him to play (and run) games when he's around that age. So for now Basic and Expert D&D will remain something I studiously collect, and when the time is right, I plan to introduce him to the hobby in this manner.

There will be some differences, of course. I've snagged some Basic and Expert books on Ebay, which is great....but the vast majority of what I will hand him is going to be in the form of PDFs I'll stick on his tablet (he's got a Nook; my entire family is laden with Nooks). So that part will be a bit different.

He'll also have something slightly different from my own experience: my parents were great at encouraging myself and my sister to figure out RPGs, and they bought us whatever fiction or games we wanted, which was wonderful....but the actual process of playing these games was anathema to them (only my uncle was keen to figure it all out, and he mostly focused on GDW war games with me...I was playing Imperium and Invasion Earth by age 8, for example).

So my kid will have two parents with over-active imaginations to help him out...although, ultimately, some of this will be about mom and dad learning when to back off and let him do his own thing, too. Even if it means he'd rather play....oh, I don't know....Mouse Guard rather than D&D!