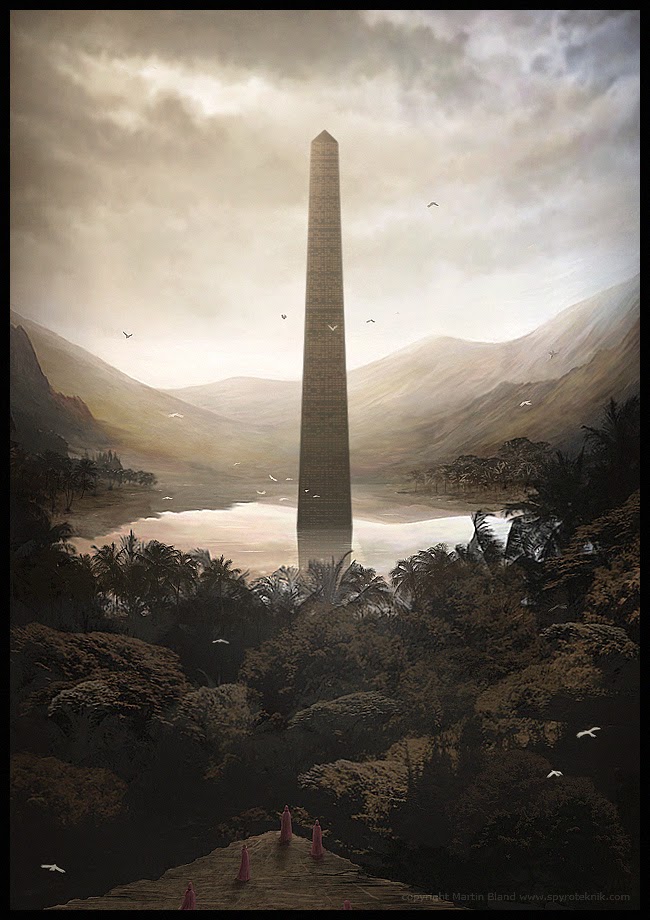 5: The Glade of the Black Obelisk. Here in an open clearing in the woods is an immense black obelisk carved in Primordial runes. The obelisk is regarded by scholars of the occult as a navigational marker and the “heart” of the Vosjin Wood (a DC 15 History check can reveal this information). Adventurers who are trapped in the woods but who do not draw the attention of the Black Rook or White Stag will inevitably find the obelisk within 1D6 days of wandering, although always seemingly by happenstance.

The Black Obelisk Is ancient, and rested here long before the woods formed or the battle before it. The Obelisk is actually a sort of dimensional anchor, and it is the lynchpin that keeps the Outworld tethered to the mortal plan in this region; should the obelisk ever be destroyed, the tether will sever and the Vosjin Wood will be ripped back fully into the Outworld. Destroying the Obelisk is a task most difficult and foolish, however.

Students of the dark arts who have studied the primordial language or those with sufficient magic can attempt to decipher the ancient glyphs on the stone. The stories claim the stone provides a map of the Vosjin Wood, and following its marked paths will allow one to safely navigate the woods. This is partially true; etched upon the stone are runic marks that define the ley lines of magic which surround the region. There is a magical line of force that leads to each of the major locales in the woods, even if by accident; the nature of magic in the Vosjin calls for such an arrangement, even as it weaves its reality through untamed dimensions. Studying the obelisk for 1D3 days’ time with a D15 insight check will reveal one of these paths as desired, and possibly more if the researcher is uninterrupted in that time --not even sleep is allowed. Indeed, a scholar who studies the altar without sleep for a full 48 hours will gain advantage on his next insight check with the obelisk.

If one studies the obelisk for long enough (at least a week), then it may become evident (DC 22 insight check) that the ley lines seem to form a cage, and the obelisk is about where one might imagine a magical key or capstone would be located. After this revelation, the caster finds it difficult to even sleep, and is plagued by disturbing dreams and nightmares, and suffers from a random form of indefinite madness (DMG); should he ever perish he will return as a wraith trapped in the Vosjin Wood forever more. He begins to sense that a vast, ancient being rests beneath the earth, and that the obelisk is a key to its terrible cage. The being is older than the primordials….indeed the primordials may be mere whisps of its terrible dreams brought to life at the dawn of creation. Who imprisoned this being is unknown….

Trying to destroy the Obelisk is difficult. It’s immune to all forms of damage, and digging beneath it reveals that the obelisk is but the tip of a vast, deep rod of obsidian-like material that sinks a good mile into the earth….and there are runes in the primordial script all the way down. The deeper one digs, the more subject to nightmares and permanent madness the diggers become. In the highly unlikely event that someone reaches the bottom, they find a vast subterranean cavern in which the terrible elder god Id’Hyakaa dwells in trapped slumber, waiting for the time of its awakening to engulf the world in madness. 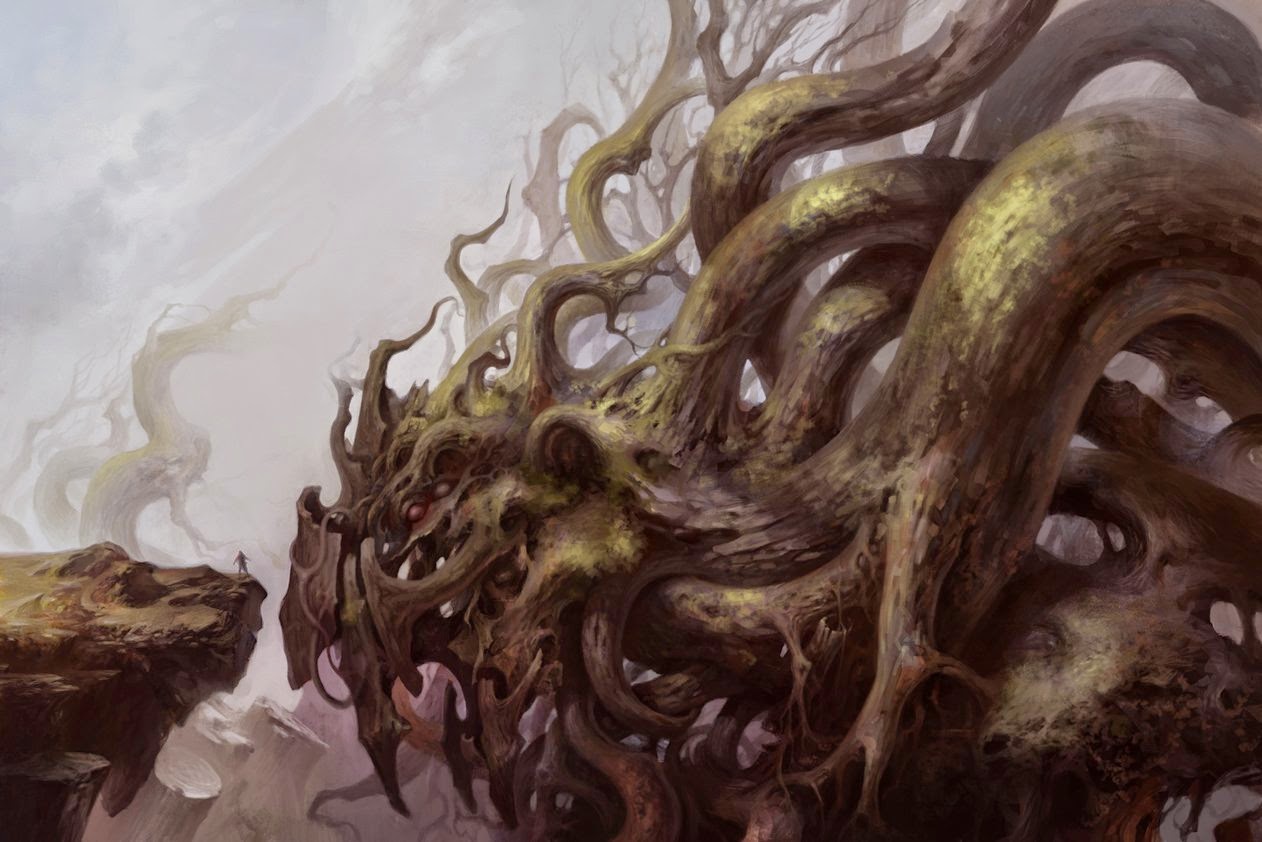 6: The Monstrous Tree. Sometimes appearing in a grove of other trees, and other times appearing in an open glade, these monstrous trees are sprinkled throughout the region and contain the entrapped bodies of the old warbeasts of the Saric Blood Knight army. Like the vampiric blood knights trapped in trees, feeding blood to these creatures is a bad idea; even a drop can awaken the beast within. Some of the monstrous trees slumber in torpor, but there is a  25% chance they have dominated 2D6 nearby awakened trees into serving their bidding, using the awakened trees to try and hurl bloodied victims to them to feed. Once even 1 HP has been spilt on the tree it will burst free of its prison within 1D3 rounds, revealing a terrible warbeast of the ancient empire. Roll a D6: 1-Manticore, 2-Chuul, 3-Peryton, 4-wyvern, 5-grick alpha, 6-tyrannosaurus rex); DMs should adjust the encounter if desired to reflect the exploring party composition/level. 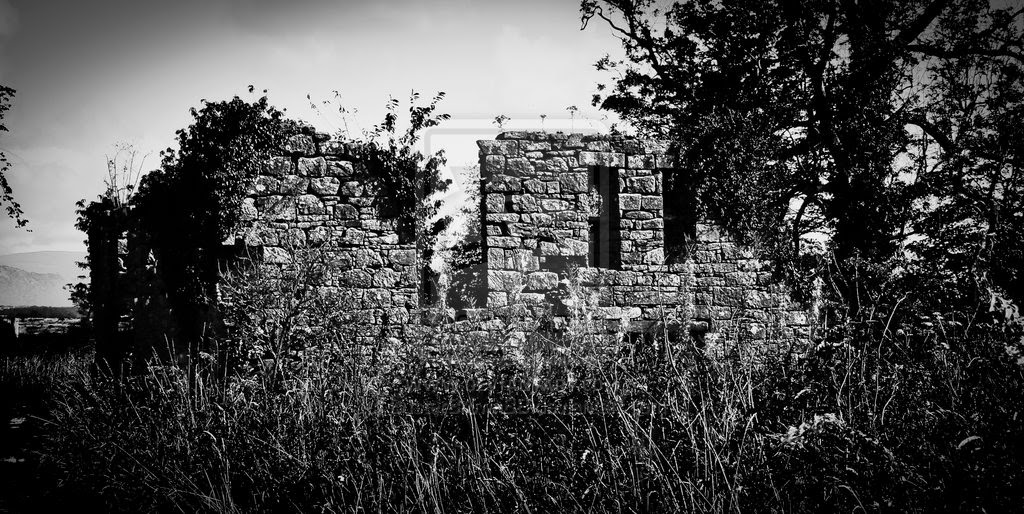 7:  The Lost Settlement. About a century ago a courageous, though fool-hardy pioneer named Gaston Ebernard discovered the passage to the Vosjin Wood from the Hill of Giants and determined that he would carve out his fortune in its unexplored depths. Gaston had a singular mind of action and was uniquely unaffected by the miasma of madness and uncertainty that settles upon most who spend too much time in the haunted woods. He brought his extended family with him, and found a suitable location in the form of a high hill in an open glade near a winding, unnamed river. There he settled, and was never heard from again.

Today, those who stumble across the earthen mound (a DC 12 religion check will suggest that the mound is actually an ancient barrow of immense size, and not a natural hill) will find the remnants of this failed settlement. A two-story high house of stone rests atop the hill, its roof almost completely removed as if torn off. The base of the hill contains several more crumpled dwellings, partial stone walls still intact. A carving into the side of the hill was turned into a sort of barn or stable, and fragments of bone can be found everywhere.

By night the ghosts of the extended family roam the area, engaging in mundane tasks as if their life has never been interrupted. The have haunting, indistinct features as if they are unable to quite remember what they looked like in life, or are hollow projections of some greater presence. Interrupting the ghosts in their tasks will draw their ire, but the ghosts are otherwise disinterested in the living.

8: The Tymardiae. These reclusive men are the only denizens of the wood who seem able to come and go as the please; indeed they know of dozens of paths into and out of the woods other than the path from the Hill of Giants, but is is the gift of sight that lets the Tymardiae find these paths. These men claim to have descended directly from the Enkanneth goddess Suliversa, and as a result their unique pathfinding abilities allow them to traverse the paths of the Vosjin Wood and even to find  hidden passages into the Outworld. When encountered the Tymardiae are usually friendly, unless there is obvious evil among the party. They will be especially kind and friendly to aasimar and haflings, whom tymardiae adore for some reason.

The adventurers may encounter different groups of Tymardiae, either an encampment, a lone wanderer or a caravan. The GM can roll a D10 to determine more details as follows:

Encampment: 1-5 active and thriving temporary settlement; 6-8 an abandoned settlement, but stone huts and hearth make for safe resting for the PCs (reduce wandering encounters to 1 in 12); 9-10 a destroyed encampment, with evidence of monstrous attack.

Lone Wanderer: the lone wanderer may be one of the following: 1-4 a friendly guide who offers his services to help the PCs find their way; 5-7 a lone murderer and outcast who will pretend to aid the PCs while plotting to rob and slay them (may 50% be in league with ibixians), 8-9 a pilgrim on a quest to seek out the base of Mt. Sahambla; 10 a wandering ascetic who visits the forest on occasion but has knowledge of the secret paths into the Outworld.

Caravan: the tymardiae see the Vosjin Wood as a hub for travel between the mortal realm and the Outworld, and even know of other such hubs across the lands of Pergerron. The caravans use these secret paths to bring goods across vast distances in short periods. Caravans will always be open to trade, though weary of dangerous looking adventurers, and usually consist of 4D6 able-bodied men and twice that number of women and children, with one wagon drawn by horses or cattle for every five folk in the group. Tymardiae traffic in strange goods at times, and there is a 50% chance that they will have at least one vendor with some interesting magic items or potions.  On a D10 you can determine their ultimate destination: 1-3: Samaskar; 4 another remote city along the Anansis River; 5 a city in Mesutin to the south; 6 a town in the Outworld; 7 Galitath; 8 a local Saganyir village; 9 they travel to one of the seasonal encampments to set up shop and meet with other tymardiae, 10: north to the Aiga for trade with the northmne; 11: the city of Phantomax to the far west; 12 the City of Doors (yes, THAT city of doors) for exotic trade (if this is rolled there is a 100% chance the caravan has lots of magical goods for sale).

Caravans don’t travel lightly; the hearty nature of the tymardiae means most of them are guarded by seasoned tymardiae adventurers with some magic, usually 1D4+4 levels of experience, and sometimes they hire willing extraplanar bodyguards from the outworld. Outworld, of course, is the planar realms….and the vast dominion of the primordials is a plane unto itself, with direct connections to the Outlands and the other planes of the Great Wheel. The Primordial Realm is located deep in the Elemental Chaos.
Posted by Doctor Futurity at 6:00 AM