At last, the final three encounters in the Vosjin Wood...I'll work on assembling this in to some sort of coherent downloadable soon. 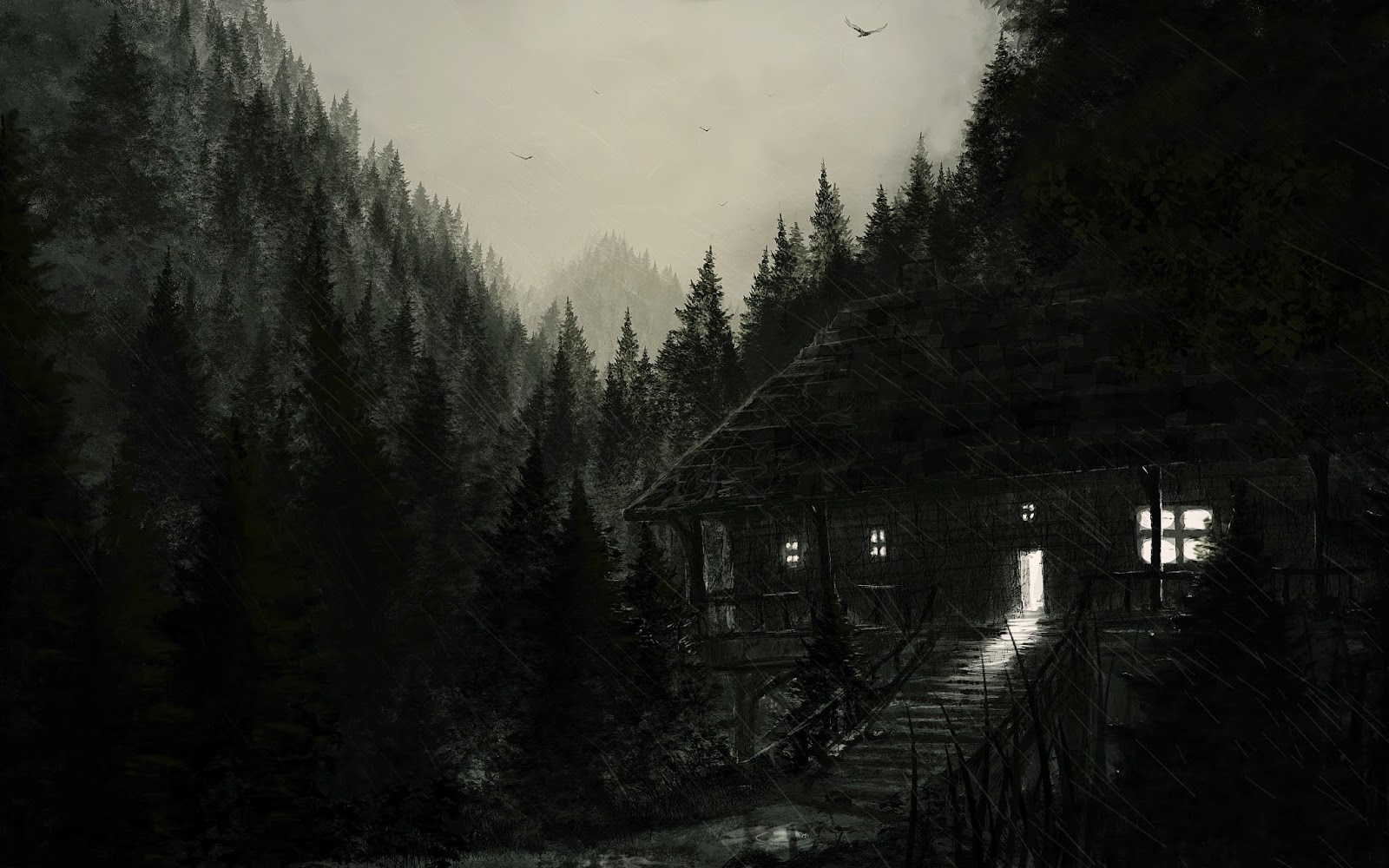 18: Mark of the Spear. This location is almost impossible to find save by chance or the will of one of the wood’s more notorious denizens. The Mark of the Spear is ground zero, the location where the Enkanneth drove the enchanted spear called Asiphiron into the ground, releasing the flood of magic which created the woodland prison in which the army of Blood Knights and monsters of Sar were trapped.

Happening upon this area reveals a small clearing of gentle but thick grasses surrounding what appears to be a sunken depression in the earth, almost like a crater. At the center of the crater rests what appears to be a polished spear of pure gold with ruby stones along the length of the shaft. Runic writing in the primordial tongue spells out “Asiphiron” along the side of the weapon. The actual spear head is buried deep in hard stone at the base of the incline where the spear rests.

Asiphiron is a potent artifact weapon, but it’s time has come and gone. The removal of the weapon would free the army and destroy the Vosjin Wood; powerful divine magic insures it remains firmly rooted. To protect it, the Enkanneth bound the spear to a powerful planar being, the Solar Angel Setirivan. Sterivan dislikes the duty placed upon him, but any who attempt to move the spear using supernatural means or with even a hint of success (for example, making a STR DC 25 to try and pull it free) will summon him immediately to either reason with or dispatch those who would seek to remove the spear.

Should Asiphiron somehow be removed (and this really should be a GM call) then the Vosjin Wood will dissipate within 1D100 days and free the ancient army of Sar. That might merit a campaign in its own right…. 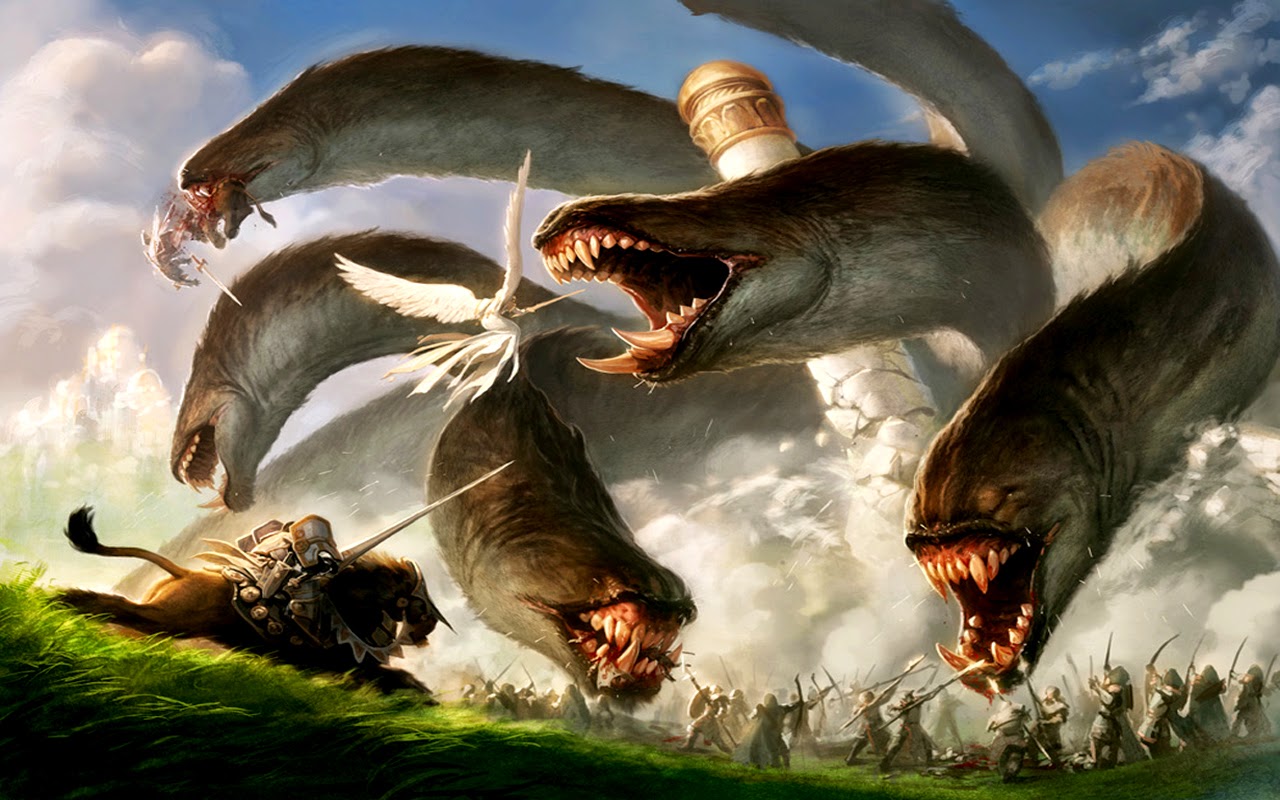 19: The Hydra’s Tree. The Hydra’s Tree is the most ancient and possibly most formidable of the denizens trapped in the wood. It can never be freed (save for the removal of the Spear, entry 18) but the tree nonetheless continues to cause problems for the mortal realm. The original Hydra was a twenty-one headed beast of immense (gargantuan) size….actual stats will not be provided here, but imagine a Tarrasque-like version of a hydra. The tree is equally immense, of almost mind-bendingly large dimensions, and within its branches and leaves it is said an entire tribe of goblins lurks, carefully tending and pruning the tree, relishing the sense of fear and presence it exerts on the forest around them.

The tree covers several acres, and its immense branches, twenty one primary trunks for each head, droop heavy with strange yellowish-green orbs of eerie fruit. Eating one of these fruits is deadly (DC 21 CON save or suffer 100 points of poison and 100 points of acid damage immediately) but if one ripens and drops it will spawn a juvenile hydra where it lands in 1D6 days. This has led to a plague of the beasts at times, many of which are later devoured by the serpent in the woods or other major predators, and still others seem to find their way into the Outworld. There is also a rumor that the goblins of the tree are actually kept there under Sukagra’s orders to prune the tree of its fruit as best they can.

Adventurers hanging around the tree have a 15% chance per half-day of encountering roaming hydras (1D6). They are also likely to attract the attention of the goblin tribe (there are roughly 100 goblins living in the tree’s upper branches). 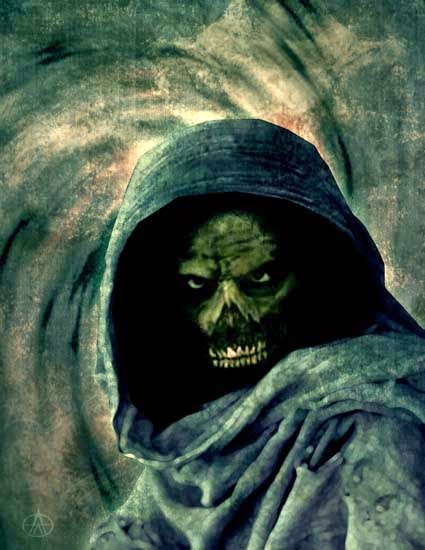 20: Aruman’s Villa. Much has already been said of Aruman, who’s details were posted previously, so here’s a bit more information to add to it all. Aruman’s hut is a ramshackle affair, a long house divided into three parts, centered over an old dry cistern in the thicker, darker corner of the wood. The cistern is one of several like it that contain a planar gate at the bottom, this one opening up into the Outworld, along a stretch of Mt. Sahambla. Aruman regularly uses it to visit the mountain and the sprawling ruin of a lost Saric city where he enjoys studying his magic.

The villa itself is guarded by two brutish fellows, Urn and Skard, who are both Galitathic barbarians (NE human barbarians level 10 each). The two brothers were both ensorcelled by the Witch of Galitath and they journeyed many years ago to seek out Aruman to remove the curse….which he did, but in exchange for their servitude thereafter.

Aruman wears’ a mask of leather which a scrutinizing eye (Heal DC 12) might notice is human skin. He rarely reveals his lich-like features and can suppress the glow of his eyes at will. He favors speaking with visitors before harming or eluding them….Aruman is thirsty for the knowledge of the outside world, and an easy way to become friends with him is to bring new sorcerous knowledge for his vast collections.

Aruman also has a night hag which serves as his personal maid and assistant named Rukatha, who always manifests as an old woman. Rukatha can summon 4D6 wraiths of the woods as a bonus action if harmed or threatened, and the wraith obey her unerringly.

Aruman’s inner hut includes a passage dug deep which winds down into the cistern, chiseled steps narrowly guiding those who would dare down into the depths. At the bottom is a shallow pool which is rife with necrotic energy (it deals 1D6 necrotic damage per round to any who immerse themselves even slightly in the water), as well as the carved gateway which opens up onto the lost ruins on the vast eastern slope of Mt. Sahambla in the Outworld.
Posted by Doctor Futurity at 6:00 AM