Over the course of the last few days I was reminded that Green Ronin produces awesome stuff on occasion, albeit some of it requiring a great deal of effort to properly absorb (I'm looking at you, Mutants & Masterminds 3rd edition). While reviewing my MnM 3rd collection (I have all of it for various arcane reasons, although the DC Adventures part is probably easy enough to figure out the "why" on for me) I realized that the problem with MnM ...for the last two incarnations, at least because 1st edition did not have this problem....is that it's very dense, and requires a lot of personal time and effort to parse through, at least for the sort of gamer I am who likes to go into things fairly well informed. It's D20 roots aren't helpful, either; a lot of terminology in MnM requires that you not only learn the system, but you must unlearn all the numerous extremely similar features of other systems in the process.

This isn't really a knock on MnM at all, but rather my recognizing that the game is beyond the scope of what I want in an RPG these days. It is to superhero gaming what Pathfinder is to D&D: a much more iterative, complex process that is delightfully majestic in its labyrinthine mechanical design for those who are into labyrinthine mechanics. I guess in this analogy that would make Champions equivalent to Chivalry & Sorcery, then?

Realizing that what I really want is a superhero system that does for the genre what D&D 5th edition (and also 13th Age) did for the "D&D fantasy" genre, I started a bit of shopping around. There are a lot of contenders out there in this market, actually....but there's an interesting Goldilocks-space in the realm of superhero games, not unlike that equivalent Goldilocks-space that D&D 5th edition walks in, where you can easily find lots of games that are too complicated, and also plenty of titles that are too simple, but very few that are "just right."

As it turns out, a bit of research does suggest a magnanimous contender for ideal superhero gaming, and it comes from the same designer as MnM (Steve Kenson): The Icons Assembled Edition. I have ordered a print copy and picked up the PDF. It appears to be a very concise redux of the superhero RPG genre, with precisely as many rules as one would need to run a fast-paced comic universe campaign without stopping to check your scientific calculator for anything or get into yet another argument about grappling (slight hyperbole there, I would assume MnM fixed that issue).

Helping this decision along was the unexpected reveal that Icons is very well supported online and has more than a few print products, including from 3PP. My next closest contender was Supers!, which still looks fascinating and may be on my hit-list in a few weeks; we shall see. I have some vague memories of D6 Supers from many years ago being rather cumbersome in actual practice, but Supers! looks like a more refined edition of the same. 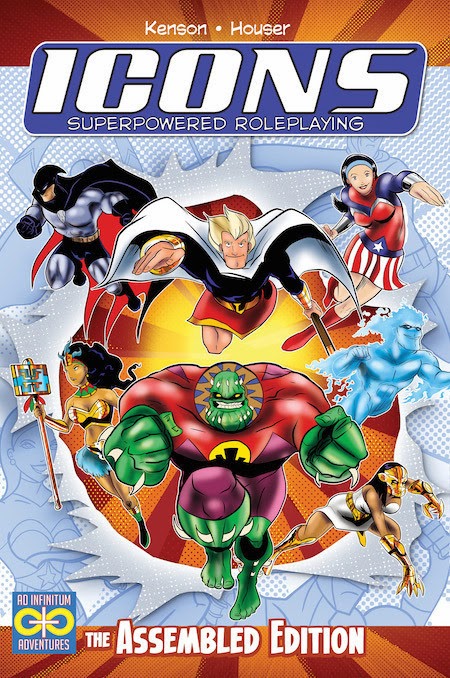