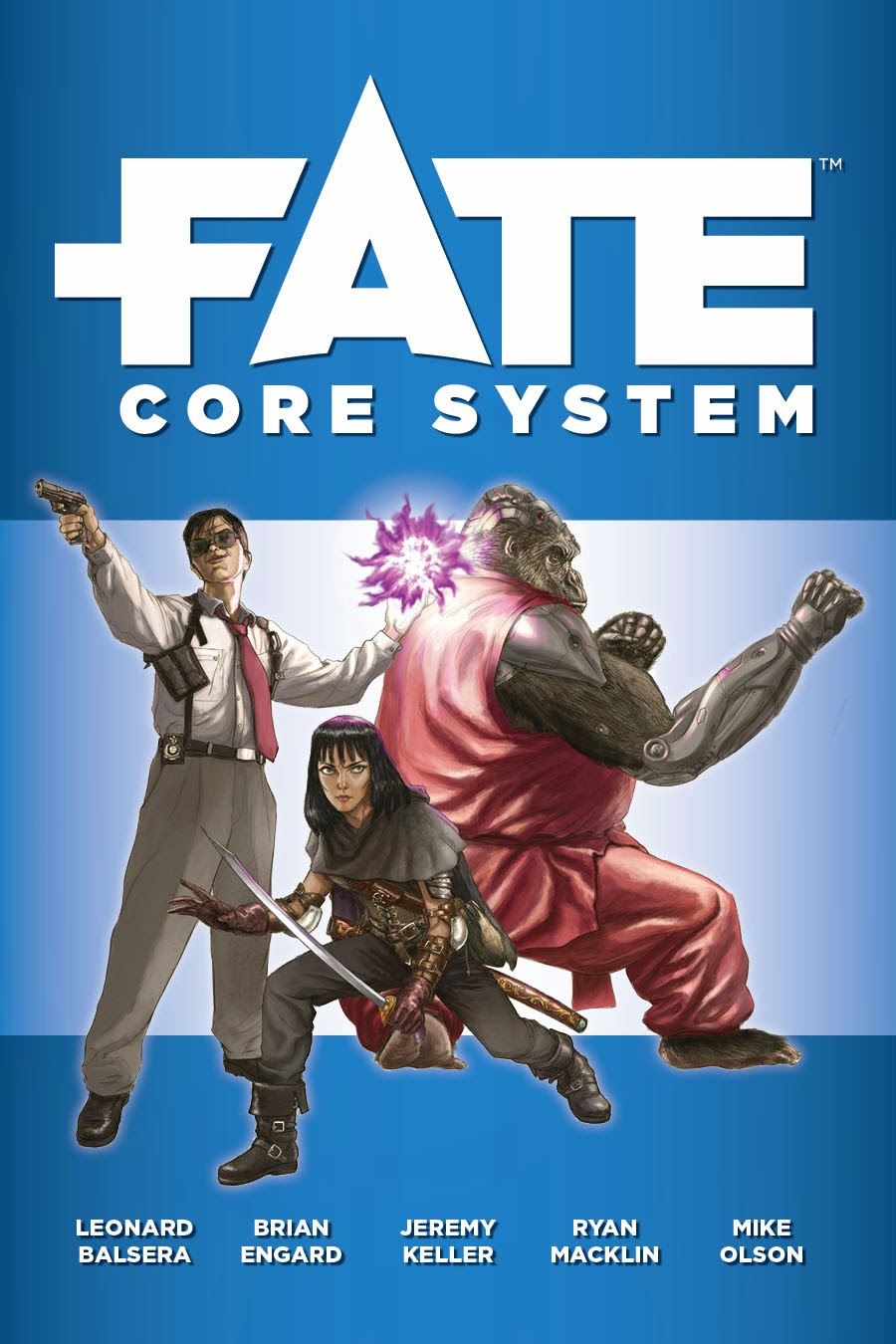 My local new & used bookstore has a small section for RPGs and is essentially one of only three non-big-box locales in Albuquerque where it may be possible to buy any RPGs at all. It's also one of the only places in town where you have a chance of finding used games. Recently, thanks to one of the staff who has taken a strong interest in the RPG scene lately, it started carrying some contemporary products.....including FATE Core!

I snagged this today, and have been perusing it at length. I have been told by cohorts deeply enmeshed in FATE that Evil Hat, which started FATE (spun off from Fudge) with Spirit of the Century is honestly the best place to go to learn how the system works. So far I think this is proving true of FATE Core....it is extremely well written. I've had copies of the free version provided to me before, but ultimately I am still a print kinda guy when it comes to reading rulebooks, so snagging this edition is a real boon to expanding my interest in FATE.

I have felt that a big obstacle to getting into FATE in the past for old veteran gamers like myself has been the unfamiliar terminology coupled with the fact that FATE's mechanical design is aimed at achieving very different effects than traditional RPGs tend to go for. I remember reading Legends of Anglerre, where an example of mechanics included a case where a GM could introduce a fleet of pirate ships attacking a harbor, but a player could invoke an aspect where it was revealed that she was actually a sister of the pirate lord (or something to that effect). Cool concept, but demonstrated that the core conceit of the GM in FATE was really different from other traditional RPGs....not least of which being you don't want to define that pirate lord too tightly if players can effectively negate adventure content you have created through judicious use of aspects. I also recall reading the combat example in that book as well as Diaspora, and coming away perplexed at what was even going on; the jargon was counter-intuitive to even understanding what I was reading, which was a bit of an unsettling experience. To contrast, I still recall the "example of play" cases in D&D and AD&D 1E quite well; what I remember most about the Diaspora examples was, "I don't know if I'm actually reading English or a technical manual for a language that is just very similar."

But it's probably just a learning curve issue.  FATE Core also provides some better examples than I have seen in other FATE books, including cases where it does not appear that the GM must adhere to the plot-altering aspect just played by a player; in fact it advises players need to fit their aspect's play within the context as provided. I also noticed that FATE Core actually deliberately ditches a few of the older jargon terms, making me think I'm not the only one who had trouble connecting to them.

FATE definitely seems easier to grasp for long-absent gamers returning to the fold, especially if they grew disillusioned with D&D or (even better) never came into the hobby via D&D in the first place (i.e. arrived via Vampire: The Masquerade or some other route). That said, it seems to me that there's a very robust and interesting experience in FATE, and I think it was smart of Leonard Balsera and co. to produce this new, clean, updated edition that is also highly multiversal in approach.

I currently have at least one player who really likes FATE in the Saturday group, and everyone already knows this is going to be my year where I try do do at least 50% of my gaming in "non D&D" systems because of burnout and all that nonsense. Since I still can't find anyone willing to actually run FATE locally, maybe I will at last step up to plate and see if I can master this system....

Anyway, if you're curious about FATE Core take a look here at it's free SRD content. I'll post more once I've fully absorbed my read-through and try to work out some content/ideas of what to do with it.