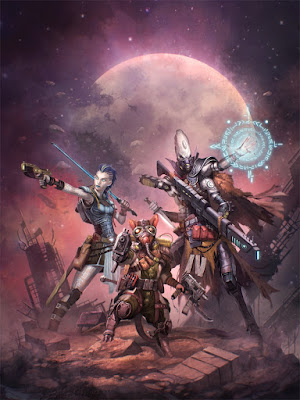 Starfinder is an interesting new direction for the Pathfinder RPG.....it's essentially offering up a new genre of gaming which is both very old and somehow still unexploited, at least in the manner which Paizo is choosing to approach the subject. Yes, we've had lots of space fantasy before (Spelljammer, Star Wars, Space: 1889, Warhammer 40K) but prior to Starfinder I think the only really distinct mixture of hard fantasy and hard SF that was attempted was 3rd edition's Dragonstar, one of Fantasy Flight Games' early D20 series. It wasn't bad, I'll say that much.

Starfinder's unique not because it does anything particularly different....rather, it does some very formulaic content very efficiently, and attempts to wed the free-for-all elements of fantasy gaming in D&D/Pathfinder form to the SF environment. Other attempts to do this have had mixed success. The reason Starfinder feels distinct is because it is actually trying to capture what it's like to play Pathfinder --exactly as it feels, and with all that entails-- but with all the trappings of a science fiction campaign.

This is harder to do than it sounds, as anyone who has played or run their fair share of SF RPGs can attest.....the effort to run an SF game depends on a few key factors, which I consider as follows:

1. The Tech/Science Hurdle. You have to decide if your SF setting is going to be soft or hard on the science bits. This makes a huge difference in style and feel, and also how much technical information you need to consider in your scenarios. Starfinder removes this component....you can sliding scale the SF element all you want but it doesn't change the fact that this is a future universe with lots of magic. So Star Wars, essentially.

2. The Go Anywhere Hurdle. In most SF games you have to do one of the following: you prepare a careful set of scenarios and make sure the PCs don't deviate from the places you have worked out; or, you roll up a region with a minimum of detail and utilize the resources of the game to populate content on the fly. The former is the way most SF games tend to work, and the latter is how Traveller tends to do it. Both are solutions to the problem of a SF game requiring dozens or hundreds of worlds that you need to prep for or at least anticipate your players will visit. A third option is the "use an established setting" to keep prepared, such as Star Wars or Star Trek. Starfinder seems to be aiming for a middle ground here, with a defined area (Golarion Space In the Future) and it's emphasis on a magical future means you don't need to worry about too many technical details of each planet if you don't want to.

3. The Advancement Question. This may seem odd, but think about it....outside of Star Wars D20 editions, most SF games tend to aim for mechanics which de-emphasize character advancement as you see it in most D&D derived games. This is fine, as most SF gamers tend to want a bit more verisimilitude in their gaming and fans of Traveller are cool with the idea that advancement is something that happens slowly with effort rather than in bursts of adventure. But Pathfinder, D&D and their derivatives appeal to the gamers who happen to really enjoy spontaneous advancement through adventure, and Starfinder is squarely in the middle of this approach.

Anyway, I am continuing to read the massive Starfinder tome, and so far it's a fair mix of what I expected (Pathfinder in Spaaaaaaaaaaace) with some occasional surprises (occasional and unexpected rules changes/advancements that are both surprising and sometimes quite welcome).

I can't decide if I have the energy to run it yet. I like the relative simplicity of Traveller and Savage Worlds for my SF gaming, and despite the fact that I've never been a huge fan of hard fantasy/SF mixes I kind of like the aesthetic design that Starfinder is going for. It's evocative enough to get one thinking about how to make it work, and that's kind of really all this game needs to be successful: if people find their imaginations sparked, their interest piqued....then this is going to be a successful game.

I suspect....just an idea.....that the coolest part of Starfinder might be that it can allow a GM to conceive of the distant techno-fantasy future of his own campaign worlds. I once ran extensive Spelljammer campaigns which spun out of my Lingusia setting. Starfinder could also accommodate this, although unlike Spelljammer (which let you project your contemporary fantasy games in to wild space) Starfinder lets you imagine the fantasy world in the distant future. This is untrod turf in the world of fantasy gaming*....something one could do on an individual basis, but never something actually codified into a game before that I am aware of. I'm not even sure from my current reading point that Starfinder definitively addresses this, since it is primarily focused on selling their own future Golarion worlds setting....but it is most definitely an option, and something I'd like to see future GM resources explore.

*The end of the book has lots on this (including the classic races updated for Starfinder).
Posted by Doctor Futurity at 9:15 AM