Ages of Lingusia: Octzel's Kedrion Forest in the Age of Strife

I've been meticulously, slowly rewriting and updating my Gazetteer of Lingusia to reflect the "new" era of the Age of Strife. Here's one of those regions, revamped to reflect the adventures of heroes in a post-time-shift 2092 AW....some of the content below originates from my first gazetteer circa 1991ish, and the rest reflects the changing tastes and interests of the DM over several decades.

I've been enjoying D&D 5E and 13th Age as my primary rulesets for gaming with Lingusia, with the caveat that the icons of 13th Age are essentially too limiting for a venerable campaign like this, despite being fantastic plot-hook/event generators That said, you might see references to either system in some of these gazetteer rewrites. 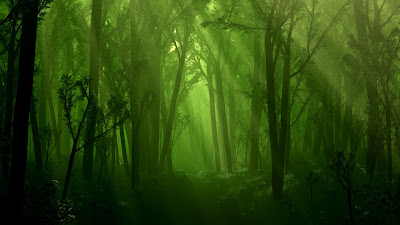 Originally named after Altanir Kedrion, an early explorer from the Fertile Empire of old, this lush forestland prospers in the vast rain shadow of the north coast than runs all the way to and through the Umian Hills to the south.  The region today is known for several dozen small settlements and villages, most of which depend on local lumber and crops of nuts, berries and river fishing.

The Kedrion Forest was once the site of a great mining effort during the early years of the Hyrkanian Empire. Several old castles can be found along the coast where these mines were protected, and there are hundreds of actual abandoned mines scattered throughout the region. It is said that gold, silver and adamantite were readily found in the region, but the area was long ago stripped by the old empire when Octzel was still nothing more than a penal colony.

Aside from the relics of old imperial occupation and mining, there are several ancient elven and orcish strongholds that lie abandoned and overgrown in the region, occasionally serving as temporary homes for wayward adventurers, bandits or foolish monsters. The orcs and elves that once inhabited this region were long ago driven out by humans in the area.

Along the coast of the forest are immense, migratory mutant sea turtles called the minhor. The minhor appear seasonally, wading ashore and making their way through the forest to the foothills of the Loroden Mountains and the Umian Hills, where they burrow in to lay their eggs. Several months later a great migration of young hatch, and during this time the many settlers of the region spend their time harvesting minhor pups for food, decoration and sport. Minhor are not normal turtles: they graze on grass and debris with dozens of porous, red mouths on their stomach, and their armored heads are actually vicious weapons. They can consume meat, despite appearing to be herbivores.

The Vault: There is rumored to be an ancient cavern, once a mine, that was hollowed out into a temple complex to Yeenoghu, the demon lord. The story is that some time ago the prince of shadows himself, Wormie Vellsoth, claimed this cavern and slew an incarnation of the demon god in the process. He then commissioned a fine dwarven vault door and used obscuring magic to hide the cavern from prying eyes. Some claim he stows his boundless treasure hoards within. Others think it’s a major center of operations for the Black Lotus Guild. Still others think it is a diabolical trap set by the prince of thieves himself to remove competition in a trap-infested dungeon.

Ruins of Castle Dymhar: stories of this haunted castle on the coast speak of how you can see it on a rocky outcropping just twenty miles east of Port Chudeza, but no one can find a safe approach. Those who have scaled the cliffs to invade the castle have found it haunted by a vile wight who may or may not be the ancient Hyrkanian lord Geradastro Gonn Dymhar, the noble believed to have run many mines in the region, and to have so cruelly treated the native elves and orcs that they actually set aside their own differences and slaughtered the noble and all of his men in a night of bloody revenge.
Posted by Doctor Futurity at 7:00 AM