Ages of Lingusia: Port Chudeza in the Age of Strife

Continuing the Gazetteer revisions for the Age of Strife, ca. 2092 aw: 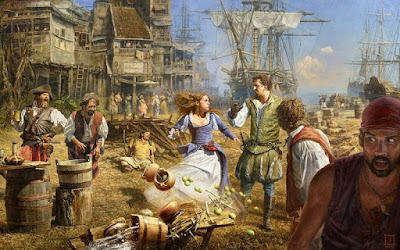 Located on the southern stretch of coast across from the island-locked city of Drama, Chudeza is the opposite in disposition and manner of its northern sister port. A den of roughnecks, pirates and thieves, Chudeza is principally known for its lawlessness, or as close to it as a city can get in the province of the king himself. The duchess of Chudeza, Matron Teredeth Gonn Malastor, has been well known for her indiscretions over the years and since her husband passed away five years prior the city’s very nature seems to have changed with her own proclivities. As such, the relaxed policy on law and the fast and loose nature of commerce in the port has turned it –rapidly—into a favored locale for men and women of ill repute.

The port is known for being a favored locale of the North Sea Pirates, and the local garrison and guild hall is maintained by Trevor Dann Draskos-Osterman, brother-in-law to the venerable Abelman Draskos, leader of the North Sea Pirates. Trevor married Antonia Draskos, Abelman’s disreputable sister. Antonia is in fact a close friend of the Duchess Malastor. This has reflected in her influence.

Despite the level of debauchery and sin that Chudeza’s corruption displays, the port is remarkably free of known influence by the Black Society. Certain cults to Mitra thrive in the port, however. It is rumored that the demon known as The Digger, or sometimes as Yetrog, has an unusual level of worship in the city, but the local temple to Enki seems powerless to do much about it. The high priestess of the temple, Lady Tymani Sedrais, seems almost apathetic to the fact that Chudeza displays such corruption just beneath the surface.

The Corruption: there is a suspicion promulgated by visitors to the city that the temple of Enki may be corrupted from within, and possibly even secretly allied with the Cult of The Digger.  Allegations that Tymani Sedrais is actually a cult lord for both Enki and Yetrog have not been proven, but suspicious leaders of the Church of Enki may seek someone to infiltrate and find out if the Cult of the Digger has, in fact, undermined their power in the city.

Corruption at the Top: The Duchess Malastor gets into a great deal of trouble and appears to a foppish hedonist, but behind the scenes she is a powerful agent in Octzel’s underworld dealings. She may hire roguish adventurers to conduct actions against her enemies, protect her interests, or silence those who would dare to suggest she behaves in a manner contrary to the will of the king.

Privateers: The North Sea Pirates often stage operations from Chudeza, running their actions against Hyrkania and the Northmen. One or more ships may be in Chudeza recruiting for new actions against the north, all under the auspices of being privateers to the king of Octzel, operating under lawful writ of Duchess Malastor.
Posted by Doctor Futurity at 6:00 AM