If you haven't read Philip Jose Farmer or his World of Tiers series, here's the links to the new two-part, seven volume compendium that I have literally been waiting for since I first moved to electronic format as a tablet reader six years ago:

Volume I: The Maker of Universes, The Gates of Creation, A Private Cosmos

Volume II: Behind the Walls of Terra, The Lavalite World, Red Orc's Rage, More Than Fire

Note that at least as of this writing the books are about $12 each on Barnes & Noble but $20 on Amazon for some strange reason.

These seven volumes comprise one of the best world-building "planar adventuring" style series to spring from the sixties and seventies, and are distinctly filled with the pulp-styled trappings of Farmer, who you might also know for his Riverworld series, Dayworld series and Wold-Newton Universe books (which are themselves a tribute to Victorian and pulp-era science fiction, tying a diverse lot of classic characters in to one universe). If you're a fan of pursuing Appendix N-styled recommendations, the World of Tiers series is a huge one to check out.

World of Tiers is full of interesting surprises, but the short introduction to pique your interest is to point out that at a certain level this series has more in common with Zelazny's Amber novels than it does Farmer's other books. It's about other dimensions, the strange and unique worlds and physics that keep them functioning, and the godlike engineers of these realms. As Zelazny indicated, it was a series inspired by his imagining as a kid but not brought to life until his forties. Sounds kind of like what most tabletop gamers do these days, right?

I have collectible editions of all the books on my shelf, but I hate to bang them up as they are --you know-- collectible. So getting the entire series in electronic format is a real pleasure. I shall now proceed re-reading one of the defining weird fantasy series of my formative years, books which I have revisited over the years and found only get better each time. 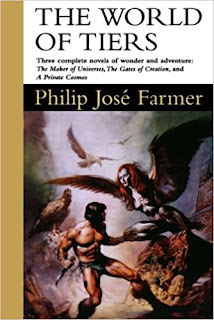 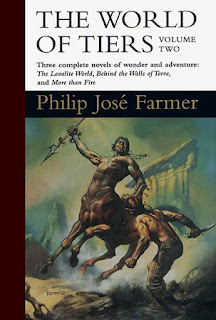 The covers of the last print edition that I have sitting on my shelf
Posted by Doctor Futurity at 1:32 AM