Ages of Lingusia: Smaller Polities in Northern Octzel (in the Age of Strife)

And a number of smaller locations with some adventure seeds.... 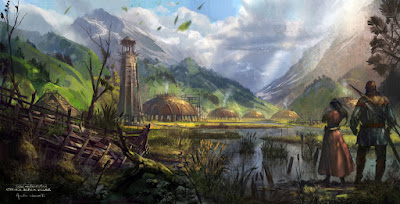 This roadside town is a famous pitstop for overland caravans and travelers looking for a break from the harrying experience of traveling across the Great Divide in the Loroden Mountains to the south. Stetson is the location of an enclave of Wardens of Halale, and is noted for having a vast, ancient ruin just south of the town which dates back to the ancient days of the Halic people who occupied the land before Hyrkanian occupation drove them to extinction. Stories of ghosts haunting these ancient ruins are mostly unfounded, but it is noted by some that necromancers and cultists to the chaos gods have on several occasions seen fit to enact ancient rituals of sacrifice at the hangman’s tree along the road which marks the path to the ruins. The last such event led to an all-out purge by the wardens who spent weeks hunting down cultists to the serpent god Lazar. Prior to that, rumors of arcane rituals committed by members of the Black Society from the capitol have led more than one scholar to conclude that there must be something really, really interesting about that ancient tree.

The Dead Tree: few truly understand why the dead tree is so important to the strange cults that lurk in the region. The scholar Idominus Vetheren of the Capitol would like to know, and will mount an expedition to investigate both the tree and the ruins, with the blessing of Stetson’s wardens. Little does he know that the tree itself is tainted with the blood of something terribly ancient and evil buried beneath the land, from which the roots of the tree have drawn the black blood of chaos for many an age. The lost Halic City of Kharamos was destroyed twelve hundred years ago by this ancient evil, in the name of the old Octzellan king Donn-Dadera, who sought to wipe the Halics off the face of the earth…

The town of Diom is mostly regarded for its famous Tall Tales Inn, where merchants and nobles often travel to enjoy some time in the country. It caters to a generally more opulent crowd, but the Inn itself earns its name from the many professional bards and their tales of derring-do that make much of the tavern portion of the inn so entertaining. The tavern is believed to have been more of a shanty in the past founded by the Ederlon Family, but earned a reputation when the Empress Phyxillus Usyllyses and her traveling companions frequented the tavern a century ago, regaling its denizens with tales of their adventures at a time before the Empress had ascended to rule the Empire. The inn’s current proprietor is Kiriney Lesean-Denera, a woman of aristocratic demeanor who is single and portends to be of elven blood (though she in fact an aasimar of indeterminate age).

The Bounty and the Bard: the sylenic bard Chops Madur has come to play at Diom, but last night in a bout of intense revelry he was kidnapped by unknowns! Was he taken by the amorous noble woman Verithra Elas Tetra, who fell in love with his voice? Or was he kidnapped by local brigands who plan to ransom him for money? Or did he wander off and get snagged by local orcs or goblins, who happen to find sylenic halflings a delicacy?

Indor is a rough fishing port and crafting town, and has little identity outside of its place as a town of tradesmen and artisans who engage in business too stinky, dangerous or uncomfortable for city life. Regular barges take goods too and from the city every day, and the fields around Indor are constantly being worked to meet the harvest needs of the Capitol.

Coastal Pirates: a group of self-proclaimed pirates have begun harassing barges moving to and from the Capitol, but they are using a sleek three-master schooner which is alarmingly fast and agile. The pirate captain call shimself Shandro Ward, and a bounty has been placed on his head to stop the onslaught of piracy.

Smalton grew over the last century from a lone village that had at one time been a sequestered getaway for Octzellan nobles to a more robust township, specializing in some renowned vineyards. The original founder of the town, Orlus Smalton, eventually went on to forge a large family, which grew to the several hunded people the town represents today. It is a remarkably quiet location other than the wealth that pours in from decadent nobles of the Capitol seeking respite from the “rough life of the city.”

The King is Coming: the King of Octzel has decided at long last it is time to visit this luxurious resort called Smalton! The procession is immense, the opportunities vast, and the mayor of Smalton, Orlus III, needs mercenaries willing to scour the area to make sure there are no threats from bandits, orcs, goblins or cultists to make the King’s visit perfect.

This small town provides much of the agricultural output to sustain Urlu, and is also in the middle of the Western Woodlands, which are variously claimed at times by the orcish Warlord Faragor, who has ruled from his Iron City in the Under Realms for a decade now, and at other times by the Khitteck Spider Queen Ikiriot, who preys on human and elf alike in the region. Adin is also close to the elven home of the Sylveinurien village Woodhome, or Syliedurias, which no humans save a few wardens have ever visited.

The Demon: Allu Dias is an ancient glabrezu demon that was summoned forth by the orc shaman Morgados, to harry and destroy Adin. In a mishap, Morgados was slain, his spirit and body taken possession of by Allu Dias, who now walks as the shaman and seeks to manipulate the warlord Faragor into not merely razing Adin, but Urlu beyond…
Posted by Doctor Futurity at 6:00 AM