Movie Review: Infini - or "What Solaris would have been like, with more machine guns and screaming" 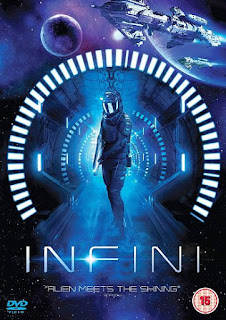 This movie would never have been on my radar if Hastings hadn't folded last year. While grabbing random movies for 70-90% off I happened to land a copy of Infini. I'd seen this movie before, but buying it for anything less than a pittance seemed like a bad idea. It had the stink of a SyFy special all over it just from looking at the box cover.

Well, I was half right. It might not be a SyFy special, but it does have the stinky resonance of a direct-to-cable production, with the caveat that clearly the people behind the film really wanted to capture the essence of the "Dead Space" genre of film and games, but without stepping too deeply into the obvious tropes. The end result reminds me of one of the countless science fiction tales you find in the middle of any number of random novel collections: a weird work, which feels like an idea half-formed, or maybe fully-realized but without enough character or depth to cover much more distance than a short work of fiction could handle.

It also kind of reminds me of the nearly infinite spew of self-published novels on Amazon's Kindle; you know the ones, with great cover blurbs mentioning all the bells and whistles ("space marine," "alien virus," "haunted space station," "everyone's gone mad in a totally-not-like-the-reavers kind of way," etc.) and the first volume is free.

But this is a film.....and it does exist. So is it worth it? In a nutshell: if you saw it on Netflix and you were really bored, I wouldn't say you had to skip it.

Generic space marine Whit Carmicahel (Daniel MacPherson) is on his first day on the job working for a special forces group that uses advanced teleportation to travel across the galaxy protecting corporate interests in the 23rd century. Apparently this is a high risk technology and you can suffer a mental breakdown when you teleport, but despite the lead text warning us about stuff like this the real problem has nothing to do with teleporting and everything to do with a distant mining facility (Infini station) at the edge of the galaxy, where things have gone to hell in a handbasket.

The exact timing on all of this isn't that important: when the spec ops guys get teleported, when the mining base went rogue, when it really had problems, when the second spec ops team goes, all of this is sort of "there" as fill to the story of a bunch of spec ops space marines trapped on a haunted space station where a virus turns you in to reavers.

Of course it's an alien virus, and actually it's an alien organism which covers the planet. Because it is briefly mentioned as "flammable" it was suggested it was a great fuel source, but that doesn't seem to come in to play in the story later on (thankfully) other than as a one-off to explain why it was being mined, almost like the writers suddenly realized that the idea was kind of stupid, so someone thought two stupids made a smart or something.

I digress though. Okay so Whit (W.C.) is about to get sent to this place when something bad happens....other spec ops teams return and they appear to be quite mad. Right before the entire facility goes on lockdown and gasses everyone his commander gets him teleported. Cut to a week later, and another facility is dressing down a crew of seven spec ops dudes who are all going to investigate the haunted space station, which is apparently something that happened a while ago but it's never entirely clear to me as to the immediate urgency at that moment that they send live humans to the station.

The second crew is informed they need to recover W.C. for reasons that are flimsier than my D&D group explaining why they met the new guy to conveniently replace the old guy who got eaten in the middle of the dungeon. They are also supposed to lock down the station and confirm payload or something along those lines but it sort of becomes more or less irrelevant very quickly. They arrive at the station, we have a few minutes of smart protocol in which they keep their helmets on, don't touch things they shouldn't (or get stopped by someone) and then they meet W.C. who's been hiding in a locked down corner of the facility for a week due to "time dilation" and how it relates to whatever their teleportation is.

Just when it looks like everything's on track for a smart mission complete and extraction, they take off their helmets, let down their guard and help W.C. get things up and running, all while averting a possible overload or something. Then  a couple maddened miners attack from out of nowhere, and in the ensuing carnage everyone becomes infected with a reaver virus due to exposure to blood.

Most of the rest of the movie proceeds to play out like a mix of Bioshock Splicers preying on one another while W.C. tries to figure out what's happening, something he apparently didn't bother to do for the week he was here previously, but now is worried about since he's also apparently infected with the virus (just very, very slowly). He quickly pieces together that the stuff they mine on the planet is a mimic organism which can replicated human tissue...possibly even whole bodies....precisely. This is underplayed (no one starts assuming others are "replicated" because they are all going crazy right now anyway) but becomes relevant later.

The second half of the movie is mostly actors who didn't get a lot of establishment on camera to make you care about them descend into violent madness. It's not bad.....you at least know who they are (nutjob spec ops people who take their helmets off for any old reason) but their mutual efforts at destruction seem awfully played out for very little payoff.

In the end....um, spoiler alert.....W.C. is left all alone, plagued by the virus, but with enough wits to record a speech to the organism that comprises the entire crust of the planet and explains to it that in messing with people it went for the worst elements of them, and it should feel bad. The organism then creeps out, heals and revives everyone (including at least one guy I thought was completely eviscerated) and the crew for a few moments act like they are either: A. pod people feigning memory loss, or B. the actual crewmen suffering actual memory loss of their deaths. They then beam back to base and everything ends on a shockingly upbeat note.

Indeed, the "shockingly upbeat note" might be the most surprising thing about this movie which otherwise felt like it was pulled from a mosh pit in which Dead Space, Solaris and Event Horizon were all duking it out while The Thing dipped its toes in for a second or two.

It wasn't horrible. It just was very, very basic and it really needed a rewrite on the screenplay. Badly. To the credit of the many actors who I barely recognized or didn't know at all, they were all pretty good at evoking the basic elements of their characters. I don't remember anyone's names, but they each nailed their "TV plot archetype" assignment fairly well.

I give it a solid C average.

1. Even when they are showing good protocol, not touching things or taking off their helmets, the spec ops space marines still take their helmets off.

2. It is important to ask why any live humans get sent with this teleporter tech if they could just send drones. (Answer: not in the budget, and for my case I refer to that scene where the one guy holds a drone in his hand that looks like the ones from Prometheus but it does nothing but flash).

3. If the sentient world goo could understand W.C.'s final rantings and ravings then the question arises: why couldn't it understand anyone else, at any point? How did it take his little speech to convey this message to the alien goo? And Why did it care?

4. I was really bothered by the fact that none of the guns appeared to have scopes or even iron sights. What the hell??? How do you aim with those things?

5. The space goo, in the moments when we did see it, was actually a pretty cool effect.