As I've been reconstructing Lingusia in the "time altered era" of the Age of Strife I've been working on updating all of the Middle Kingdoms and their neighbors. Here's a short treatment on Galvonar in the era of 2086-2096 AW, a region often overlooked in my campaigns.... 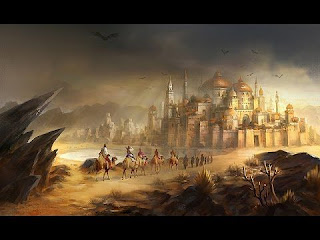 Cultural Groups: Galvonar is divided into four regions: Coastal Galvonar (Albadia), Arahad, Sur, and Harad. The regions of Arahad, Sur and Harad are each a culturally distinct region of the overall nomadic tribal groups, and each has between 3 and 6 distinct tribes in each region, and dozens of smaller tribes. Coastal Galvonar is called Albadia, the name for the “civilized men” of Galvonar.

Social Groups:  Galvonar has a strict caste system with limited advancement. In the civilized regions of Albadia there are slave castes, mamalukes (warrior slaves), and freedmen with no property. Once a man gains property, which is possible if a merchant prince grants ownership or he gains enough wealth, then he may become a landed gentry, merchant noble, merchant prince, or perhaps even a high order title such as grand vizier or Caliph. Among the nomad groups there is far less structure, with most men defined by the horses they own and the size of their families. Polygamy is rampant among the nomads but less so in Albadia. Women are never allowed to own property in Galvonar, and have many religious restrictions on what they may wear, speak or even learn (see deities below).

History: Galvonar is a stretch of territory identified by several cultural groups that are bound by a number of commonalities. The western Galvonarians, the Albadia, are coastal merchants, fishermen and culturally civilized men who propser from the lush coastlands that are a strip of fertile land bordered by a vast desert. The nomadic Galvonari to the east dominate a vast, treacherous stretch of desertland that encompasses much of the southern subcontinent, and borders both the Albadia to the west, Persedonia to the east and the Galonians to the south.

Historically Galvonar traces its root identity back to around 500 AW when the early Saurian Metal Dynasty was identified by antiquarians in the region as the first appearance of a distinct language and culture that is recognized as Galvonarian today.  It was not until 1700 AW that Galvonar was first united by the warlord Asaran I, a personality of such strength that he is still revered as a culture hero by nomad and Albadian alike. By 1850 AW the Galvonarians had disintegrated into the mixture of sheiks and the caliphate that is recognized today, and remained so ever since.

The current Calif of Albadia nominally claims rulership over all of Galvonar, but in truth his power over the nomad sheiks is limited to a measure of influence through trade and gifts. The nomad Sheiks claim no structure of rulership outside of their own tribes, and frequently war with one another. The Sheiks, if anything, maintain better relations with the Takonorian and Cimer to the north than they do with their civilized cousins in Albadia, or themselves.

Galvonarian religion is rife with contradiction. The foundation of Galvonarian belief seems to stem from a period buried in history, during which the tribes of the region were once independent and practices a form of animism comparable to what goes on in Jhakn today. They were conquered and turned into citizens of the empire of Old Galonia, but after the collapse of that empire the nomads were given over to a period of religious liberation for a time, and eventually Eastonian merchants from the north brought the pantheistic beliefs of the Middle Kingdoms to the region. The result is an interesting contrast of pantheistic and animistic beliefs tempered by the memory of the older faith of Galonia. 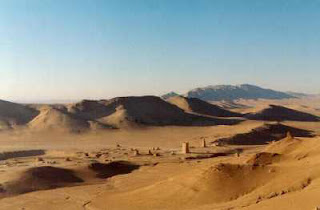 Dhuka (Naril): the god of mankind, the rule of law and the Empire of Hyrkania was adopted in recent centuries by the Galvonarians of Albadia. His aspect of fire and the sun is the most prominent representation in this region, as his status as a “god of kings” is seen as a northern aspect only (such status is reserved locally for Marduk). His fire temples in Albadia and Sur have spread rapidly in the last two centuries, and have replaced the memory of the lost temples of Ailyenarion, the old lord of fire from Old Galonia.

Kamar (Selene): The goddess of the moon, wife to Dhuka, is also worshipped in Galvonar, and was introduced about two centuries ago around the same time Naril was adopted as Dhuka. She is seen as the courtly patron of women, child bearing, motherhood and education. This is in sharp contrast with the traditional feminine goddess of Udena. Most Albadian merchants have adopted the worship of Kamar, and women in Albadia under clans who follow her have allowed women to learn other languages and broaden their education as a result. The traditional tenets of Udena that require great modesty among women are still prominent even among worshippers of Kamar, however.

Galon: the old supreme god of Galonia, after which the old empire itself is named, is still regarded with feverish intensity as the supreme deity in the nomadic region of Arahad. Galon is sometimes recognized by some Albadia clans, but is mostly eschewed in place of the belief of Marduk and Naril.

Marduk: the ancient warrior king is believed by most Galvonarians to have been the first ruler of Galvonar in the prehistoric era before the Saurian Metal Dynasty, and that the first sheiks like to claim Marduk as an ancestor. Marduk is said in Galvonarian myth to have slain the first dragon kings, Tiamat and Bahamut, and to have protected the land in an era predating even Old Galonia. He is considered today to be a strong god of warriors and kings and has several prominent temples in Albadia, as well as a massive ziggurat in his honor built by the Asaran I in the city of Kiddaros.

Set: Set is worshipped as a cult of deceivers in the desert, propagated by the haikyndyr serpent men in the region. Amongst men, Set is publically considered a profane deity and his worship is actively suppressed. Privately some men seek out his hidden cults, seeing set as a god that grants great power over other men.

Udena: Udena is the goddess of women, and may be an old import from Old Galonian belief that has survived to this day, despite the near total destruction of that Pantheon in the War of the Gods. Udena is a goddess of fertility and magic, and has female-dominated cults throughout Galvonar. She is a deity defined as a trinity, with a strong aspect of both virgin, whore and crone in her imagery. Each aspect is given its own unique element, but are considered parts of the same goddess: the Udena’Caliska (virgin), Udena’Haddara (whore) and Udena’Materaska (crone). The dramatic restrictions on women in Galvonarian society are at least partially due to the beliefs of the cults of Udena, which place intense restrictions on female behavior. This includes requiring that all women cover themselves head to toe in public with specially recognized garb, and that they not be exposed to “foreign influences,” such that  they are not allowed to learn foreign languages or even seek out an education equivalent to men (though knowledge reserved for women only is allowed, including herbalism and various forms of oracular divination). Only priestesses of the Udena’Haddara are allowed to dress down, in sacret sacred temples dedicated to the sacred prostitution of that aspect of the goddess.

Nyctaris: the goddess of the night is revered, especially among the nomadic groups, and is considered the goddess of travelers in the night. She is most prominent in Harad, Sur and Arahad but looked upon as quaint in Albadia.

Nephythis: The benevolent goddess of the dead, keeper of tombs and the wealth within, is considered the modern caretaker of both the Valley of the Gods where the old pantheon of Old Galonia is said to rest, as well as the protector of the necropolis where old pharaohs and modern leaders alike are all buried.  She has taken on a unique level of worship among the merchants of Albadia and the traders of Harad, who see her as the protector of wealth both among the living and the dead.

Ailyenarion: the god of fire and old civic lord of Galonia is believed to be dead, but is also believed to remain as a spiritual guardian of the Valley of the Gods in the brokenlands of Galvonar. He is sometimes given offerings at his fire temples, which are mostly abandoned but still standing throughout the region, in the belief that his spirit still offers blessings. Aside from Ailyenarion, abandoned temples to other dead gods of Old Galonia such as Bashtet, Metatros and Bashtron can also be found in the region of the Valley of the Gods. There may be a handful of scholars and priests that still remember and even revere these dead gods of old.

Tragonomos: this ancient demon god was one of the seven soul-bound servitors of Eskandar, and his cults are found in secret throughout Galvonar, but most commonly in Sur. The belief in Tragonomos stems from the offer of power and the elements of masculine inheritance that the demon god seems to promise. His covens are often found working behind the scenes to undermine the caliphate and create a new reign of power seeking to make Tragonomos the sole god of the land.

Haro: the god of murder in the pantheon of the Middle-Kingdoms found a foothold in worship in Galvonar, believed to have grown popular in the century leading up to the rule of Asaran I. The Fire Knives, assassin-cultists of this god, are said to have a strong presence in the secret cults of Albadia and Sur.

The Dark Pharaoh: The memory of the Dark Pharaoh from Old Galonia, who rose up in 1950 AW to lead the last Great War of Chaos against Hyrkania in the north had a profound impact on the nomads of that time. The Galvonarians were attacked and enslaved by the Dark Pharaoh’s cults, and until their freedom in the twelve years of that war the Galvonarians learned a great hatred for the Galonians who took to the worship of their Dark Pharaoh. When the Dark Pharaoh was revealed to be the reincarnation of Xauraun Vestillios, the Champion of Chaos, and was subsequently banished or destroyed by Warenis, the Champion of Order, certain nomads had succumbed to the dark madness inherent in being exposed to the Champion of Chaos and even in liberty continued to worship his embodiment of chaos. These cults are few and far between, but often quite dangerous when they gain a cult leader who is able to gain a spark of chaos magic to fuel their hatred. 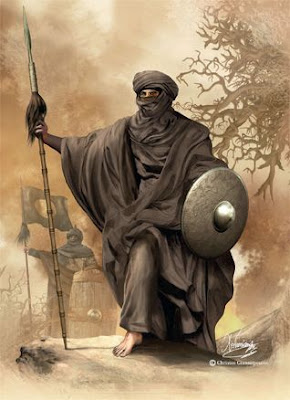 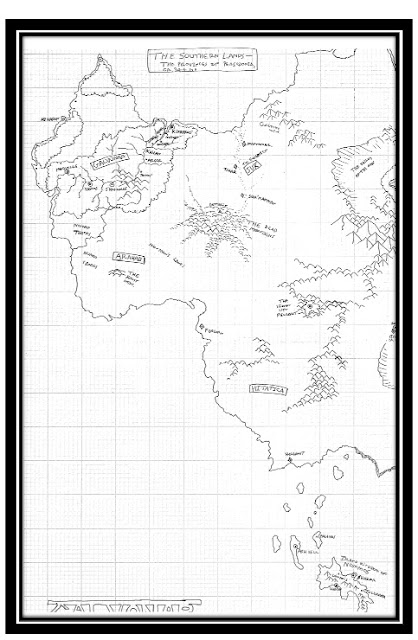