Ages of Lingusia: The City of Urlu in the Age of strife 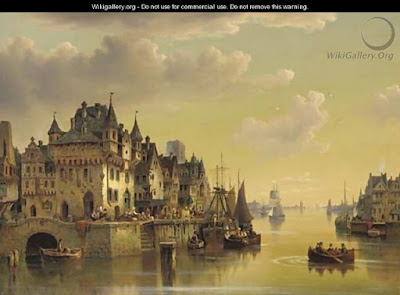 The coastal port-city of Urlu was once a freeport in the old days before Octzellan emancipation, where merchants from Jhaknian families would gather and trade with eastern Imperial and Northern merchants. The city was eventually annexed in the Octzellan rebellion, and has been a major trade port ever since. That said, it’s families hold deep ties to Jhakn in the south, and Jhaknian merchants continue to show deference to the port as a center of trade with the north and east over the Capitol.

Three families hold power in Urlu. House Meridar, ruled by Questo Gonn Meridar, is currently the dominant power, and Meridar has used his influence to provide generously low tariffs to foreign merchants choosing Urlu as their main port, so much so that for southern merchants it is more profitable to stop in Urlu and sell goods that middle-men then carry by coastal schooner or cravan to the Capitol than it is to travel directly. The port at the Capitol, which has expanded as much as it can, does not mind Urlu providing relied like this.

The other two major powers are both houses of mixed ancestry, with both Octzellan and Jhaknian blood in their mix: House Thulan and House Jharas are both descended from the old merchant-captains of Jhakn, and they continue to proudly display this mixed heritage. Even the city’s religious values are influenced by their Jhaknian ancestry, with a preponderance of household shrines to various ancestral and elemental spirits. One major temple to Enki overlooks the bay, but it is smaller than most temples, albeit resplendent in décor due to the wealth poured in to it by the locals, who seem to have no problem engaging in a mixture of Octzellan pantheism and Jhaknian animism.

The Smoke Street Stalker: recently people have been terrorized by a late-night murderer moving through the region around Smoke street, the notorious lower-quarters section of the city where the butchery, smoke shops and smithies function. The murderer has been described as a cloaked man who moves in and out of shadow, and a couple sightings say there were multiples. Is it an invasion from the Plane of Shadow? And who keeps leaving the strange figurines with the word “Penumbros” scrawled in the Old Tongue on their bottoms?

The Black Light: every few weeks off the coast of Urulu to the west a mysterious, purple-black light flashes in the distance for a time, seemingly to some unknown cypher, albeit one no semaphore specialist can translate. Efforts to identify the source have led to the remote Isle of Thorns, an abandoned stretch where no one currently resides, but which once contained a thriving pirate colony about two centuries ago. Despite scouring the island, none have found the source of the light….but three weeks back, the adventurer and scholar Rolando Dann Thurik led an expedition to occupy the island right before he predicted the next sighting of the light. His expedition has now been missing ever since. There are rumors that a depraved necromancer named Karlon Vossk, an Eastonian, recently commissioned a ship to take him to the island, as well.
Posted by Doctor Futurity at 6:00 AM