The Hero's Journey: A Look at Character Creation and Rules Differences 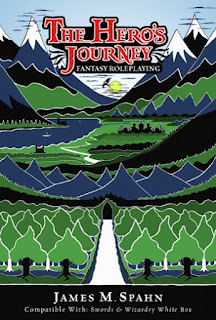 Last year James Spahn produced his own OSR fantasy game, "The Hero's Journey." It was a really nice looking book with an evocative cover designed to remind older gamers of those classic Tolkien novel covers, with a simple, stylized depiction of a pastoral fantasy realm, each layer of the image suggesting more mystery and adventure just over the horizon.

Since then I have been waiting for more of "The Hero's Journey" content but James is only one man, and he's got lots on his plate. I thought I'd take some time to explore this game, which has some very interesting twists to it. I figured exploring character generation might be one good way to talk about this system, so here goes....

I decided to roll up a random PC and ended up with a half-elven wizard. I’ll talk system after the stat block… 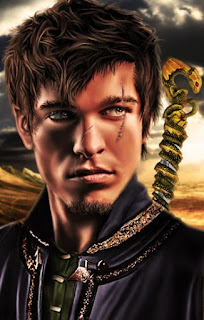 Stats: THJ has eight stats, renames wisdom as willpower, then adds appearance and luck. The luck stat has some interesting extra mechanics….if you are lucky, that is! Stat generation is not based on D&D conventions and in fact each race has a different range of dice to roll. In our half elf example, above, each stat was 3D6 except for charisma and appearance which were 2D6+6. (Yes, I rolled poorly.)

Professions: THJ adds in professions, which are not unlike a more detailed version of the background trade from AD&D 1E. You roll, get a short list of things you can do with it, and your starting gear. This is a nice touch and something I’d be tempted to port over for use in any OSR game.

Classes:  I went for a conventional class, but THJ has a dozen interesting options including some weird ones like jester, duelist, cavalier and acrobat. These are all reminiscent of older AD&D classes from the early eighties, introduced in Dragon Magazine, but their versions here cleanly reskin them for the more basic conceptual turf of S&W.

Tweaks in Hit Die and AC Mechanics: THJ does interesting things with hit dice, hit point caps and armor. Armor now has a reduction value, which does not improve your AC (or AAC if you prefer ascending AC), but instead is a damage reduction value….so plate mail, for example, reduces attacks by 5 points. Armor class is still improved by shields, though, which grant an AC bonus (as a deflection bonus). This is an impressive -2 for a buckler and a whopping -8 for a large shield. By simply virtue of mechanical integrity it strongly enforces the idea that all fighters in THJ will be sword-and-board guys hiding behind large shields.

Hit points now only roll for the first three levels and starting at level 4 all advancement is a small static number (typically +1 or +2). For our sample young wizard above, that means he could at most hope for 17 hit points by level 7 (the cap for half elves)….as wizards only get +1 HP at level 2 and +1D6 at level 3, then it’s +1 per level after that. A fighter’s top bonus, assuming a CON of 18, could be a max of 39, however, so the wizard doesn’t seem too poorly off here.

The hit point thing seems interesting because it doesn’t look like the monsters took much of a hit on their hit dice, with most having plenty of dice to roll. This is S&W White Box inspired however, so monster hit dice are rolled on D6s, but a hill giant with 8 hit dice is still going to average 28 hit points.

Level Caps: THJ keeps level caps in place. Each race has a listing of what level caps and allowances are available….the system is designed to go only to tenth level however, so many of these limits aren’t so bad. The level caps did make more sense in AD&D where the non-human races at least had the option of multi-classing, something not discussed here.

Oddities: when rolling up the sample PC I opted for wizard because the minimum intelligence to be a wizard is 15, which seemed like a squandered opportunity if I didn’t go for it. That said, the wizard’s starting allotment of spells and spell slots is a little vague in detail. I assume that the spells per level on the wizard chart is how many slots he gets, since that info must be listed somewhere, right? But then that means he gains….how many spells at first level? From the text I am unable to determine this. It’s almost like adhering to tradition, as I recall in AD&D 1E and 2E both finding out how many spells your magic-user started with was never in the section (or book) you’d expect it to be.

Although I like the concept of armor which absorbs damage, I think the system doesn’t go far enough….what about parrying rules, or deflection rules? If you are going to add in this distinction, then it is worth considering what it means for other components of the game. That said, just getting plate (which absorbs 5 damage points) makes your fighter terrifying against most foes if they roll a typical 1D6 for attack damage. Sidebar rules offer some options for GMs who experience trouble here.

I’m still trying to decide if a fighter under this system would benefit more from the extra die of damage a two-handed sword does (2D6) vs. just taking a long sword and large shield (1D6 damage but you gain a whopping AAC 18).

Alignment: THJ focuses on the law/neutrality/axis order of 0E D&D/S&W. There are a few paragraphs on this which after reading over a bit I felt were saying, “most people are neutral, but a few aren’t.”

So as you can see, from looking at the character generation side of THJ there are a lot of quirks and tweaks that would strip the title of “retroclone” from THJ but keep it squarely in the “OSR camp” anyway. I like a lot of the ideas presented here, and think that the most interesting ideas include the luck stat, the damage reduction value of armor and the weird but clever way of restricting character hit points. I am not sure how it would play out yet….my gut tells me the weak HP structure for PCs coupled with the boundless changes for the monsters would make the game feel both deadlier and more difficult, but this may be a desired result.

The book is a pretty complete package, with over 120 monsters and a robust array of magic items on offer, and just enough GM advice not to feel anemic. I am not sure if I would grab it up and run it over, say, S&W White Box, but there is definitely a lot more flavor and many more options in TSJ than there is in its predecessors. It states it's S&W White Box compatible, too....and for the most part it definitely is (you could use monsters and modules with ease).

If James produces more for THJ down the road I will be intrigued to see where he takes it. I'd like to see something with rules for multi-classing options for humanoids, parrying options for weapons, and more depth of design similar to the professions option in character generation.
Posted by Doctor Futurity at 6:00 AM