Here's an example of a FATE character for my established Ages of Lingusia setting. This shows how you can create a tiefling wizard in FATE Core without necessarily having to jump through hoops. There are several sample magic systems provided in the book as Extras. The one with specific schools appealed to me the most so I used their examples as a template for the necromantic chaos mages of the Black Circle. Anyway, here's a FATE Core swords & sorcery example: 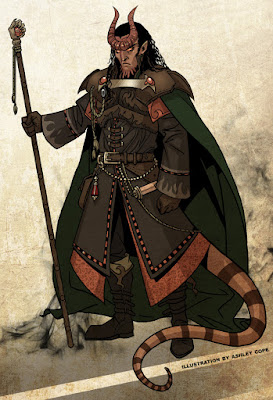 Description        A tiefling warlock of black leathers, reddened skin and a fiery disposition

Aspects
High Concept:      World Weary tiefling of the Black Circle
Trouble:                 I accept rejection with furious wrath and burning fire
I am enchanted and repulsed by sorcerous women of power
I can respect any humanoid who respects me
My comrades are my stable foundation of sanity
Skills
Great (+4): Lore (Black Circle)
Good (+3): Notice, Provoke
Fair (+2): Physique, Will, Shoot
Average (+1): Rapport, Fight, Stealth, Deceive

Extras
School of Power: The Black Circle
Permission: one aspect that names the order
Costs: Aspect slot (for permission), skill ranks, refresh
Aspects: The Servants of Chaos are Given Deceptive Power, Power is Won Through Betrayal, Only Sacrifice to the Demon Lords Brings True Power
Skills: Change +4, Destroy +3, Create +2, Learn +1
Magical Stunts:
Necromancy (+2 to use any of the Black Circle’s skills against the dead)
Chaos Imbuement (+2 per scene to use any of the order’s skills to change a target)
Not Yet Learned: Divination of the Abyss (once per scene to reroll a learn skill and keep best result)

The Phase Trio:
While traveling in southern Hyrkania after being driven from Blackholm by fanatics of the Church of Naril, Denethor encounters a mysterious castle of azure stone in the Bluesky Mountains. A witch named Denajia meets him at a campfire, to seduce him to her castle….but despite his intrigue he resists. She sends forth orcish raiders to capture him and place him in her dungeon!
(I am enchanted and repulsed by sorcerous women of power)

While in the dungeons of Denagia, Denethor meets Twisp, a Halfling rogue who fell afoul of the witch as well. His earnest acceptance of the tiefling leaves him refreshed at the basic humanity….of halflings, at least. Together, with lockpick and spell, the two escape the tower.
(I can respect any humanoid who respects me)

Later, while traveling on the road, Twisp and Denethor meet the half-ogre Buruum, who is heading to the free city of Malas, where he has heard any humanoid is accepted as given, and the money flows freely in the arenas. They have a glorious battle against Hyrkanian soldiers on patrol and decide that Malas is a fine destination.
(My comrades are my stable foundation of sanity)

The design above is under the same rules as the last character, but now for a tiefling mage instead of a human space jockey. The big difference is that I have enhanced detail on the School of Magic which is an extra option for this character. The Extras work in lots of different possible ways in the book, and I could have picked a different approach, but I like this one the best. In essence, the extra has a cost (in this case it requires the lore skill, an aspect naming it, and a refresh cost for more than one stunt from the college of magic). I defined three stunts for the college, so there's one yet to be earned.

In actual play, the skills of the college will default for the four defined magic skills, but if the Lore of the chaarcter is higher than the default skill then he uses his lore. This means our tiefling is actually operating at a +4 on all magical effects. Because these function like skills, it means that an ordinary use of a magic skill may not require an invoke or compel since they are not aspects....but the college also places aspects (and stunts) on the character, which he must accept. So as an example "Power is won through betrayal" could be used by the PC to invoke a perk when using a magic skill, or by the GM who sees an opportunity to suggest a compel....it's all fair game.

This system is fascinating in how rife with potential it is for unique effects. It is also making my GM senses tingle, since I have a couple players who could (possibly would!) try to abuse the hell out of a system like this. When considering this, I am cognizant of the fact that the invoke/compel process and limited number of fate points in the game is actually built to curb exactly that sort of thinking....so if a player decides to invoke his aspect "Only Sacrifice to the Demon Lords Brings True Power" by blasting his hapless henchman to fuel his destruction skill check, then I can feel just fine by calling on a compel to recognize that "Power is Won Through Betrayal" leads to his apprentice seeking to spike his drink with poison later...
Posted by Doctor Futurity at 6:00 AM