Ages of Lingusia: The Umian Hills and City of Greslan in the Age of Strife 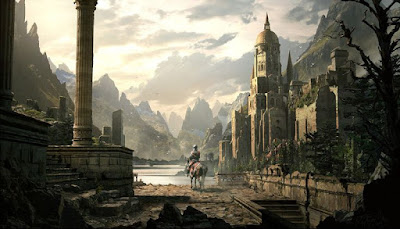 The eastern expanse of low-lying hills and mountains known as the Umian Hills are a vast swathe of hilly canyon lands with a large river-cut valley in its heart where the old city of Greslan, once a colony for mining operations, has rested for over a thousand years. The Umian hills are still a profitable center for mining in the kingdom, and the Knights of the Crown provide direct protection in the region. The Umian Hills are also believed to be rife with natural caverns stretching for dozens of miles, all of which are heavily occupied by the denizens of the Under Realms.

The minhor of the Kedrion Forest migrate to the Umian Hills semi-annually, and the men of the hills have become quite efficient at harvesting the immense beasts, so much so that Candos Gonn Respator,  the duke of Greslan, has proclaimed that the beasts must be protected and can only be harvested every other migration, to insure that they are not hunted out of existence. His knight-agent Coden Dann Barathor serves as his right hand man in enforcing the law.

The Umian Hills are a dense network of canyons, hill lands and natural caves mixed with the many active and dead mines of the region. This is ripe for habitation by denizens of the Under Realms who regularly migrate upward toward the surface, causing no end of problems for the human inhabitants of the region. The Mihidir Empire also claims the lands beneath the hills, so as often as Lancaster to the west has to fight the trolls, so to does Greslan, though Duke Kadaveras of the Mihidir city Groamspite commands large armies of goblin and morlock thralls to do his bidding, unlike his brethren to the west who use the breeding pits to create endless troll thralls.

Greslan itself is an old city, built on three walled tiers along the length of the canyon in which it is nestled out of ancient white marble culled from the local quarries. The city was once a mining colony, but it has been a major city now for centuries, and a sprawling city stretches out from its walls to encompass much of the Great Lake of Threllas in the canyon.

Greslan’s noted features include the marble pyramid-temple to Enki known as the Ziggurat of Life, as well as a famous necropolis of stone to the north where most local noblemen prefer to be interred. There is also a prominent temple to Amasyr, forged in a natural cavern just five miles east of the city proper. The city displays an uncommon level of wealth due to the prolific and seemingly endlessly profitable mining trade, which supplies most of Octzel’s iron ore and precious metals.

Adventure Seeds in the Umian Hills

Poachers: it is off-season for the minhor turtles, but poachers are trying to make a fast buck. Lord Terenos of Greslan’s Crown Knights seeks mercenaries to find the poachers and put them down.

Temple Invasion: the temple of Amasyr in its sacred cave has been overrun with monsters from the Under Realms! A quiet invasion of goblins and morlocks in the temple is just the distraction for an actual assault being mounted by the trolls of Groamspite….
Posted by Doctor Futurity at 6:00 AM