T&T Celebration incoming plus an NPC villain: Aramus of the Third Eye

Starting next week I'll be reprinting a different solo adventure from my ancient, dusty archives of The Sorcerer's Scrolls every day to celebrate the final release of Deluxe Tunnels & Trolls in PDF and it's imminent release in print form. I'll cap it off with a rogue's gallery of classic characters from my T&T days revamped for DT&T!

Yes, I have been holding on to all of these, waiting patiently for DT&T to arrive....now at last I can unleash the horde....! 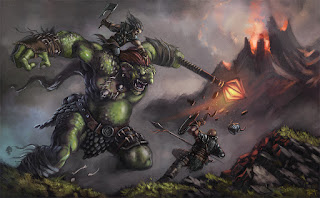 In the meantime, here's a useful NPC for your DT&T games. He's written for 7.5 edition (I think...been a while) but as I plow through DT&T I may come back and do a bit of tweaking to get him up to speed.

Aramus of the Third Eye
Human Warlock of Hyrkania; Level 4 Wizard; Male, 5’5”, 155 lbs. age 62; balding, with pallid, varicose skin, sallow eyes and numerous earrings, rings and jewels upon his person. He wears dark purple robes and has a foul odor.
ST     DX     CN     LK      IN    WZ  CH   SP    ADDS
12      22       10       34       28     42     20    15     +32
Class Bonus: wizard’s spells and training
Talents: Intimidating CH+4, Third Eye Divination WZ+6, Diabolism IN+3, Thievery DX+4
Languages: Common (Middle) Tongue, Old Tongue, Kadantanian, orcish, evish, dragon speech, dark elvish, naga, the demonic Black Tongue, Southern Speech, possibly others
Spells: All spells of levels 1 to 3 as needed
Weapons, Armor and Gear:
Dagger of Infernal Possession (Sax dagger 2+5; targets wounded with the dagger must make a L3 Save vs. Wiz or Luck, or become possessed by a demonic spirit and will now fight mindlessly for Aramus for 1D6 turns)
2,500 gold pieces worth of flashy jewelry
One ring of All-Sight (The ring can reveal images to its bearer of distant locations, so long as Aramus has seen or met an individual who has moved to this location; in this way he spies upon the entire barony through his agents; Requires 1 Wiz to activate and 1 Wiz to maintain per turn)
3 potions of invisibility (Hidey Hole, lasts 1 hour each) and 3 potions of healing (each heals 10 Con)

Aramus of the Third Eye is a notorious villain in the realms of Lingusia. He once founded the so-called “Cult of the New Darkness” in the Capitol Hyrkania itself, and instigated years of worship of the dreaded god Dalroth, a being so hideously evil that feverish worship and sacrifice can lead to a shattering of the dimensional walls, allowing vile entities from beyond time and space to seep in to reality to corrupt and destroy it. Although his order was at last put down, Aramus escaped, and fled northward, until he at last came to a small cave in which the vile dark elf druidess Phaedrael lurked. Here, he rested and recovered from the wounds inflicted upon him by the Agents of the Crown when he had escaped, and was fed strange brews by the mysterious druidess, that led him to both heal and experience profound visions. In one such vision he saw the temple of Israthor, and felt the sublime dreams of that ancient mind calling to him. Aramus became obsessed, and through her fascination for him so too did Phaedrael.

Aramus now operates his cult within the barony of Askalon, seeking the elusive Zigurrat of Israthor, deep beneath the bowels of the earth. He has determined that the dark god plans to impart a portion of its infernal essence in to a newborn child, and that this child will soon be born, acting as the voice and body of the deity, allowing the cult to find his tomb at last. Presently his cultists are seeking out this child, which according to the divinations should be born any day now.

Aramus has taken over a wing of the ancient elvish ruins of Kerys, and relies on Phaedraes to provide him with dark elves to help in searching the underworld. His human cult followers move throughout the surface world, and he has sent his most trusted agents to the Mountains of Madness to recruit mercenaries from among the foul goblinoids of the mountains. 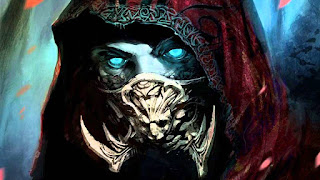 Fun fact: Aramus has an evil dimensional doppelganger (so, just like him) in the Rising Dark setting for Swords & Wizardry. Fun Fact #2: The Rising Dark was originally written for T&T 7.5 edition, but I ended up retooling it for S&W Complete for its print release! Maybe it's time to restore the T&T edition....
Posted by Doctor Futurity at 6:00 AM