With all apologies to my players, this was what showed up on Wednesday's game. I tried to simplify the Pathfinder version a bit while skewing more toward the CoC 6th edition entry. I figure Hastur in a sword & sorcery manifestation will lean more toward a terrifying manifestation of inimical evil...his mask/cloak is a later manifestation in his overall mythos, but has become sort of iconic so I kept a reference to it below.

Dropping an iconic Old One into a D&D session is a quick reminder that D&D and Cthulhu Mythos really don't mix. Not fantasy and mythos, mind you....those can work quite well; but D&D specifically is a flavor of fantasy that does not come naturally to the mythos. The prospect of a campaign in which daredevil heroes have fought rakshasa, death knights and small armies of devils hits a hard wall when the players realize they are fighting something that is effectively a puzzle piece....a creature than can and will destroy or turn them into its minions, while they desperately try to figure out how to unsummon it.

Anyway, I'm thinking that to get back to the more visceral elements of my Pergerron setting I'll be returning to a Magic World powered campaign, and let D&D return to Chirak, Enzada and Lingusia, which are all comfortably home to adventurers who stand a chance against the vile chaos. 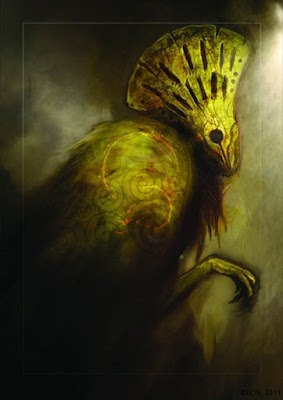 Hastur the Unspeakable (Great Old One)
CR 30 (155,00 XP)
CE medium humanoid Aberration (Great Old One)
Initiative +10
Aura: Unspeakable Presence (DC 24 Save vs. Sanity score; failure imbues target with one random form of temporary insanity; fail by ten or more and it is long term)
DEFENSE
AC 25 (dexterity plus natural)
HP 493 (34D8+340)
Resistance: resistant to all non-magical forms of bludgeoning, piercing and slashing damage
Immunity: poison, disease, cold, necrotic, mind-affecting spells, paralysis
Magic Resistance – Hastur rolls advantage on all spell saves.
OFFENSE
Speed 80 feet flying/hovering
Multiattack – Hastur can strike with any combination of up to four tattered lashes, Dreams of the Yellow Sign, or terrifying visage.
Melee Attack- tattered lashes +16 to hit (reach 10 feet, one target) 8D8+7 slashing damage and target must make a DC 24 Con save or take an additional 1D8 bleeding damage each round (save ends).
Statistics
STR 24 (+7), DEX 30 (+10), CON 30 (+10), INT 30 (+10), WIS 30 (+10), CHA 30 (+10)
Saves: Str +13, Dex +16, Con +16, Int +16, Wis +16, Cha +16
Languages: aklo, telepathy 100 feet, tongues at will
Senses: superior darkvision, true seeing (constant), Perception +16 (passive 26)
Skills: all at attribute value plus proficiency (see saves)
TRAITS
Archmagus: Hastur is a spell-caster of 20th level ability with access to all wizard spells.
Dreams of the Yellow Sign: once per day Hastur may touch a solid surface to inscribe the Yellow Sign upon it. The sign will last at least one year, but is only visible when certain stars shine right upon it at night, specifically the star Aldebaran, which may be visible in any number of night skies. Any who view the sign must make a DC 24 Wisdom Save or become Dominated (as per the spell) by Hastur. Once a save is made, the target does not have to make another save for 24 hours regardless of success or failure. Once dominated, the target behave as Hastur wishes. Each day the target remains dominated it will see out the sign, and each time it fails a further save it loses 1D6 Charisma (this Charisma will be restored with a long rest if the spell is broken with a successful save). Should it reach 0 Charisma, will immediately become a vessel for Hastur to manifest within. The sign can be removed with a wish spell.
Terrifying Visage: if Hastur reveals his true form to a target that victim must make a DC 24 save vs. Charisma or be paralyzed for 1 minute and take 8D12 psychic damage. When the paralysis lifts the target may make a DC 21 Wisdom save or become frightened and flee for 1 minute.
Immortality: as an elder god of the outer darkness of space Hastur is shockingly resilient; most manifestations of the god are said to be mere projections of a portion of its power, but it is also spoken of a robe and mask which, when donned, prompt a DC 24 save vs. Charisma, or the bearer of the robe and mask transform into a new vessel for Hastur. Likewise, those who succumb to the Yellow Sign can also become vessels of the dark god’s power. It is unknown if Hastur can be killed in any conventional sense of the word; his existence crosses boundaries of time and space that defy death.


Dread Manifestation – for 3 points Hastur may summon 1D8 byakhee or other minions to his bidding. Th minions roll for initiative and act immediately.

Hastur the Unspeakable is one of the more mysterious and terrifying of the Greater Old Ones, a dark god which moves through the cosmic void of space, sometimes aided by the dreaded byakhee who regard him as a fearsome divinity. Other humanoid and monstrous beings on many worlds worship him, but his following among men is smaller than his legacy. The Yellow Sign is a known artifact or symbol of the god, but its exact connection to Hastur is regarded as a mystery; its appearance often herald’s the god’s presence, however.

In the world of Pergerron, Hastur has a vile interest in manifesting on the planet in the flesh, for he intends to seek out an infernal device located beneath the Amber Sea, which his followers understand to be some sort of terraformer powered by the cosmic energy of the Yellow Sign. Once Hastur succeeds, all beings of the world will be puppets to the dark god, and the world will be colonized by the byakhee.

Adapted from the Pathfinder Bestiary 4 and Call of Cthulhu 6th edition.
Posted by Doctor Futurity at 6:00 AM