While perusing my copy of the AD&D 1E Players Handbook I took some time to figure out exactly what a bard in 1st edition would look like....this is the first prestige class in D&D ever, if you will....it meets all the requirements of such from 3rd edition (picky prerequisites, special level gain) but seemed to be so hard to achieve that seeing one one play was nigh impossible....and much likelier to demonstrate an example of a player who had been allowed to jerry-rig the numbers or otherwise cheat; the odds of rolling up and keeping a character in play long enough to become a Bard properly were slim. However, in my recent re-read I realize now that it is entirely not so.

In the old days, I read the rules like this: a Bard would need at least 5 levels in fighter, then 5 levels in thief, and finally get to be a bard, although druid was mentioned as well and I remember deciding then to just not allow it because WAT I don't even..... That means he needs to dual-class twice, and using the dual class rules, plus the fact that to be a bard he needs a 15 in strength, wisdom, dexterity and charisma --which is redundant because in order to dual-class he needs a 17 in dexterity, wisdom and charisma to D-C into thief and then druid. It might be there in case someone is doing a half-elf, which could theoretically get part-way there through multi-classing and therefore have lower prime requisite requirements....but a half-elf can't multi-class as a druid so WAT I don't even... so my 80's  understanding of the bard was completely FUBARed.

But I now realize that is not so!!!! No indeed, the Bard is actually a Special Snowflake Exception. He is a single-class guy who piggy-backs on two other classes but he plays by his own rules. So a Bard really does only need STR 15, DEX 15, INT 12, WIS 15, CON 10, CHA 15. Why? Because he's a Bard all along....he just gets to soak 5 levels of each class he needs first. I mean....every human or half-elven fighter with the requisite stats is theoretically a bard waiting to happen until or if he hits level 9, and then again until or if he hits level 10 as a thief.  It's a secret way of bypassing dual-class restrictions for human and half-elven fighter/thieves. Wow.

On the other hand, the restrictions and special exceptions are rife. For example, it says the bard's fighting ability is based on the level he reached in fighter....which could be up to 8th level. But is that so bad? Given that a bard will have reached around 11 levels in class advancement for his three base classes just to get 1 level in bard, that means he accrued a minimum of 38,001 XP (I am assuming he has to reach enough XP to advance to level 6 in thief and then opt in to Bard instead*) to reach his minimum requisite levels in fighter, thief and bard. This means all of his single-classed fighter buds are around level 6....although if the bard hangs out to get 8 levels in fighter he spikes to a minimum XP of 145,001 XP....which means his fighter buds are all now level 8 as well, not much of a gain for staying focused on single classes. He doesn't get more HD either....not until Bard level 2.

Yeah, I'm totally going to play a bard if I ever end up as a player in AD&D 1E again. Except I never roll that well..... 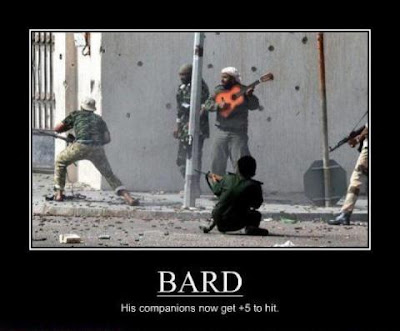 *It's not clear from the rules when the transition happens, or how, but I'd rule it couldn't happen until the character was ready to gain another level anyway. OTOH I may be wrong, as the time a PC decides to dual-class is dependent on "when he feels like it" assuming he has the prereqs....so.....maybe not.