Looking at the Pathfinder Strategy Guide 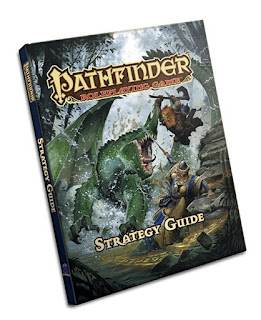 This is going to sound odd, but I'm still reading Pathfinder books, and even collecting them. Yes, I got rid of a significant chunk of my Pathfinder collection....and yes, I have implied or outright stated I don't plan to run it again (but I said the same thing about virtually every edition at one point, so whadda I know). I've suggested that the elegance of D&D 5th edition has arrived and replaced Pathfinder, which was merely a placeholder in fantasy gaming for the Big Dog's return. But....well....I am thinking I will be running it again, and it does have a place. It's nestled at the top of the food chain in terms of "D&D likes," reveling in it's mechanical complexity, with only Fantasy Craft and D&D 3.5 nesting alongside it. There is no greater edition of D&D out there right now for mechanical rigor and tactical focus, and since I've had over a year away from the game now I have found time to restore my old appreciation for it.

I doubt I'll get to run it much, mind you, because D&D 5E is so damned easy to run as a DM it's hard to want to look elwhere....but books like the Pathfinder Strategy Guide actually make me want to at least play it, even if only as a player. I had fully expected this book to be a terrible slog through esoteric tactical advice, weird new rules, detailed explanations of system mastery and mechanical rigor to extremes only delusional internet fanboys could conceivably imagine....clearly a sign I've been hanging out at certain forums online too much. In reality it's a wonderful beginner's book, an effort to create a sort of "Idiot's Guide to Pathfinder" without actually calling it that.

The Strategy Guide gives you literally everything you need to understand a given class and all its choices through level 20, talks about different features of Pathfinder games and RPGs in general with tips on how to role play in different contexts and environments....advice good for any D&D or Pathfinder game, to be honest. It is presented in a clean, friendly format with lots of layout styles cribbed from the Pathfinder Beginner box....indeed, this book could be regarded as an excellent second step from that book (though it does not subsitute for the Pathfinder Core Rules).

It's just really, really neat. I want to have this available to hand to my players who need help. There are at least two at my table right now who could use the general advice.....and if I run Pathfinder it really looks like a necessity for my table, already. I did not expect that.

We get really used to playing with old vets, seasoned "system mastery" specialists, min/maxers and the whole specialized lot of 3rd edition era/Pathfinder players, it's easy to forget how many of them are not like the elite. In fact, realizing that as much as I have enjoyed Pathfinder as GM in the past (and sometimes not) I have always been a middling player due to my general disdain for builds and optization....here however is a book which teaches how to play the game, make smart choices, and not feel like you have to jerry-rig the game to get something to wow the table. Who knew?

I'd like to see them make a real GM's book like this now. I think it would be very interesting to see what a Pathfinder GM's Strategies book looks like. The old Gamemastery Guide had some useful content, but nowhere near what this tome does for players.
Posted by Doctor Futurity at 6:00 AM