Time to get back to D&D 5E! No better way to do that than to kick off the Saturday Creature Factory again... 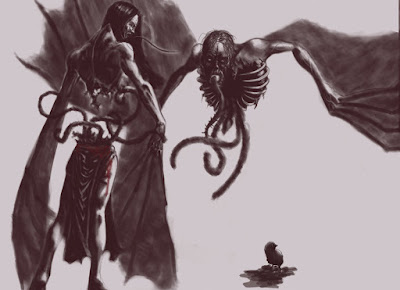 Manananggal
CR 5 (1,800 XP)
CE medium undead
Initiative +3
DEFENSE
AC 16 (+3 natural and +3 dexterity)
HP 85 (10D8+40)
Resistance: half damage from normal bludgeoning, piercing or slashing attacks that are not magical or silvered.
Immunity: psychic damage, charms/domination effects, poison, disease; does not breath
Vulnerability: radiant, light blades (see below)
OFFENSE
Speed 30 feet; fly 100 feet
Multiattack – the manananggal may make 1 bite and 2 claw attacks with one action.
Melee Attack – bite +7 to hit (reach 5 feet, one target), 1D8+4 piercing damage and if target is grabbed it takes 1D2 Constitution damage from blood drain (see below).
Melee Attack – claws +7 to hit (reach 5 feet, one target) 1D8+4 slashing damage or manananggal may grab the target (escape DC 14).
Statistics
STR 19 (+4), DEX 17 (+3), CON 18 (+4), INT 12 (+1), WIS 16 (+3), CHA 18 (+4)
Languages: common, Abyssal
Senses: darkvision, perception + (passive 10)
Skills: Deception +6, Stealth +5
TRAITS
Light Sensitive: manananggal are sensitive to sunlight and effects which mirror it (such as the daylight spell) and are at disadvantage on all actions while exposed to direct sunlight.
Vulnerable to Light Blades: light finesse blades deal double damage to manananggal which are magically susceptible to the fine light metal of the weapon for supernatural reasons.
Special Vulnerabilities: manananggal dislike garlic and salt, and will avoid it if possible though no specific harm comes to them. They are susceptible to the strike of a stingray barb, which if fashioned in to a weapon (such as a whip) can deal normal damage but the manananggal then suffers disadvantage on its next attack roll until the end of its next turn.
Separating Flying Undead Torso: by day, a manananggal looks like a normal living human or elven woman, and does not detect as (nor act) undead. At sunset the manananggal’s torso rips away from her legs/lower torso and takes flight, transforming into a terrifying half-bodied vampiric entity. In this form the undead is aware of attacks against her lower torso, which shares the same hit points; destroying the lower torso requires applying garlic and salt to the separation point, and doing so will prevent the upper body from grafting at dawn, causing it to turn to dust--so the manananggal takes special care to separate somewhere safe. Physical damage to the lower torso can cause the manananggal to dissipate into a mist which then seeps in to the earth to revive fully  formed at dusk the following evening; only by tainting the lower torso with garlic and salt, preventing reunification, will the creature perish.
Spells: Manananggal are often warlocks and sorcerers, and all manananggal have access to the following spells with a spell attack modifier of +6 and a spell save DC of 14:
At Will: chill touch, dancing lights
3/day: darkness, sleep, ray of enfeeblement, fear

The manananggal is an undead Phillipino vampiric beast whose name derives from an original meaning of “separate” in reference to its ability to rend its own body in two pieces to take flight as it transforms at dusk. The manananggal. It intensely dislikes garlic and salt, and is damaged by light weapons, as well as the barb of the stingray.

The lore of the manananggal is that it exudes black proboscis-like tongue to drink the blood of sleeping victims. It favors pregnant women, drinking the blood of their unborn children’s hearts.

By day the manananggal goes about its business, oblivious to its own existence as an undead being, though whether this is a magical effect or a ruse is unknown. They can thrive in remote villages for years sometimes, drinking only enough blood to weaken many of their kin over time without killing them, though villages plagued by such undead predators are noted for a high rate of stillborn children, unusual sickness, and  a sense of “wrongness” in the region.

When a manananggal wears out its welcome or has dwelt in one region for too many years it will quietly leave and seek out a new territory on which to prey.

Sources: Wikipedia, base stats adapted from the Pathfinder Bestiary 3 entry
Posted by Doctor Futurity at 6:00 AM