I didn't think I'd write about anything post Convergence for DC (they're calling it "DCyou")....they were introducing roughly 20 new titles, many of which didn't look like anything remotely aimed at me (i.e. Batmite and Bizarro, for example). Then there were the titles that were no brainers (Red Hood/Arsenal, Starfire, Martian Manhunter and the return of the JLA). However....a lot of titles are falling into a weird, nebulous middle ground where I'm honestly not sure if they were worth pursuing. So, in the interest of being more optimistic than pessimistic I decided to at least check out the #1s on some of these. So far --3 for 3!-- they've got me hooked: 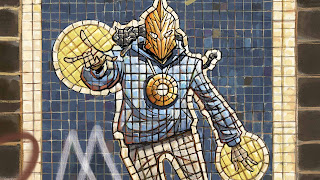 Khalid is on Earth Prime (I think) and therefore not the same poor soul who was tortured (like so many other heroes) with every issue of Earth 2. He is, however, drawing the attention of Amun-Ra and Bastet, as the Egyptian gods prime themselves for some sort of war on Earth as Anubis opens the floodgates....literally....on humankind.

The art style is leaning more on the light cartoonish side (similar to the new Burnside Batgirl, Arkam Academy and many other DC titles all of a sudden)....so they are deliberately eschewing the prior conformity toward anatomically heroic grimdark that's been a focus of a lot of New 52 titles. Like other contemporary titles specifically aimed at expanding into a new audience there's a bigger emphasis on the networked/social media interest of the characters, albeit more as a story-driver in Dr. Fate than it's sort of "flagrant, egregious and wonky" role in Batgirl.

There's a lot of opening build-up in Dr. Fate that suggests it will have an interesting internal storyline that is not reliant on what is going on in other titles. It is showing stuff that intrigues me but does not feel overly familiar....I can't point to other prior books and say, "I see where this is coming from." Good stuff. 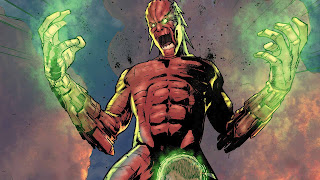 I was debating waiting to read this until I had finished my giant pile of Superman trades to get through the Doomed TPB but decided to hell with it, and glad I did. Here we have the tale of young up-and-coming STAR Labs intern Reiser who's just happy his first assignment is clean-up duty at the "clean room" in the bowels of the STAR Labs complex in Metropolis. When he's not working there (and accidentally taking his suit off in a risky location) he's also roomies with a pretentious fellow and on the prowl for a third roomie to afford the rent....in a building where it looks like Clark Kent also has a flat (no idea how this connects to the ongoing Superman plots lately, working through those now).

So....when Reiser turns into a monster that looks like a thin "Doom" creature, it looks like he's contracted that virus that Superman recently dealt with (in a very thick graphic novel compilation that I am getting too eventually). So....did he unwittingly get the Doomed virus from Clark Kent, or was it his omission in clean-up duty in STAR Labs? Does it really matter anyway, because it turns out he first transforms into the beast (in a DC-does-Hulk sorta way) only when he gets particularly excited....in this case when he's getting propositioned by the hot writer gal who he's taken a fancy to...

Lobdel's writing is solid and engaging. The art is more conventional (DC "standard") but the artist, Javier Fernandez, has a style I really like while still being less moody than some New-52 era titles. It's such a good read I really wish I didn't have to wait for #2.  I did not expect that. 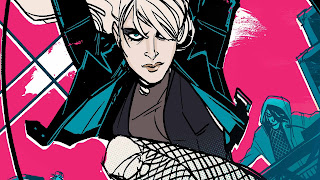 Fletcher's story in Black Canary is a little obtuse, and it doesn't help that issue #2 gets Dinah into the role of songstress with a traveling performance band who have a young girl with them that can't speak and seems to have issues....it skirts around many questions that someone who hasn't been following Black Canary's many appearances in other titles (from Birds of Prey to Batgirl to various odd and sundry) might not be able to follow too easily. For example: I am still not entirely clear on how secret her identity is, how much of her overall role in the current continuity ties in to other characters, or where they are really going with her. She's got a lot of enigma to her overall backstory right now and assumptions about Black Canary pre-New 52 are going to trip you up.

One things is for sure: she's very solidly divorced from (heh) Green Arrow and in fact its safe to assume she's barely interacted with the New 52 Ollie Queen at all, based on what I've seen in that book and Black Canary's other appearances...plus that weird subplot about her ex-husband.

Anyway, despite all that the book focuses solidly on the ideas we need for a #1: Dinah is in a band, and she's using her tour to (in theory) get back on her feet after losing everything in recent issues of Batgirl. She's not really into the band thing, but she feels concern for her fellow musicians and the weird girl. While at a performance the girl reveals an ability to expose what look like (to me) some sort of daemonites which want the girl for something...and Dinah nukes the place in an effort to save the girl. In the end, the band is united to both play music and protect the girl.

I sort of wish the book had referenced where the girl came from (maybe the preview from Convergence showed this? If so hopefully that will make it in to the future trade). I hope the book manages to clean up or tighten the focus on Black Canary in coming issues....her character has the most potential with the least realization in the DCU right now.

One thing to note: though the art style is more "DCYou" and less "New 52," don't expect this to be fun and games like Batgirl....Black Canary's kind of a morbid title as of this first issue. Not bad, but a bit surprising considering this iteration of Black Canary spins right out of her forays in the recent Burnside-area Batgirl stuff.

Next: all those Robin titles and Martian Manhunter
Posted by Doctor Futurity at 6:00 AM