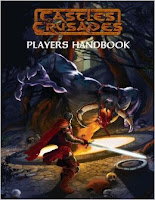 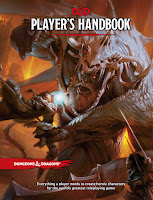 A week or so back my giant order from Troll Lord Games showed up, which included a number of books I had not previously owned: Codex Nordica, Rune Lords, Haunted Highlands, Bluffside and Town of Kalas among others.

The modules are a piece of cake to adapt to Dungeons & Dragons 5E, and the mechanical process I use for other OSR titles (namely Swords & Wizardry Complete) would work just fine here. What's interesting is that I realized that using some of the other C&C content --including classes, spells and other concepts distinct to the game-- might actually be fairly easy to borrow or adapt as well. At the core, both systems are very similar, with D&D and its bounded accuracy mechanic, whereas C&C operates with it's SIEGE mechanic, which distinguishes between good (prime) and bad (secondary) stats, that set different difficulty values accordingly. C&C uses level to boost class abilities, and D&D uses level to boost proficient abilities. C&C sets primes by class and race; D&D sets saves with proficiency by class (though some special traits may dictate from race). The similarities are thick.

Because of this, converting C&C material in to D&D looks pretty basic. For example: take the assassin class. Anytime you have a SIEGE-based mechanical use in the class, just convert it to proficiency. Anytime you have bonuses, just use the rule of thumb and convert the bonuses either directly or (if they seem too large) turn them in to advantage. When converting C&C primes, just turn them in to proficient saves for the class in D&D. You won't get a hard conversion....most class options in C&C have fewer options than 5E classes do, but they'll be more than playable. Also, extend the hit dice of the C&C class to level 20 instead of the C&C method which locks hit dice in around 9th-10th level.

You probably won't want to do this for more than quick on-the-fly NPC conversion, as virtually all of the C&C class options have D&D analogs. Some of the C&C stuff, such as Rune Lore, the Book of Familiars and the Codex Nordica setting include unique character options that might be worth considering for conversion....I'll have to look more closely at them, and think a bit on how one would do it.

You might also ask: why not use C&C as the base system and modify D&D 5E content to fit? Ironically, the answer is because 5E's core mechanic is simpler but with more features....C&C lacks a bit of the nuance that 5E has with skills, backgrounds and its general proficiency mechanic, but actually figuring out a save or check in 5E takes less effort (in fact no effort) to explain to a player, and is very consistent. Not, mind you, that C&C is that complex, as it really isn't; but the 5E system's inherent advantages due to the bounded accuracy concept make it more appealing....to me, at least.

Anyway, if you would like a list of five C&C books that are out right now which you would find are great enhancers with minimal conversion effort to your D&D 5E campaigns, check out the following:
Engineering Dungeons (a great resource for designing dungeons; may be redundant with the 5E DMG which also has great rules for such, but I think the two will compliment)
Engineering Castles (does for castles what the prior book does for dungeons, and will be more useful for this reason since the 5E DMG doesn't talk about that as much; secondarily useful for fleshing out castle projects your PCs might invest in)
The Castle Keeper's Guide to the Haunted Highlands (one of the best module series for C&C now turned into a full-blown campaign region)
Town of Kalas Adventure (very well written town setting, full of flavor and useful stuff)
Codex Nordica (classes will require work, but use my OSR creature conversion rules for the monsters, and the rest is just exceptionally interesting Norse/Scandinavian mytho-historic setting material)