Starting now and until I run out of energy I think I’ll take some time do do some conversions of some of my favorite Pathfinder and 3.5 monsters that haven’t yet appeared for D&D 5E….starting with the tentacle-tongued mohrg, terrifying serial killers from beyond the grave….! 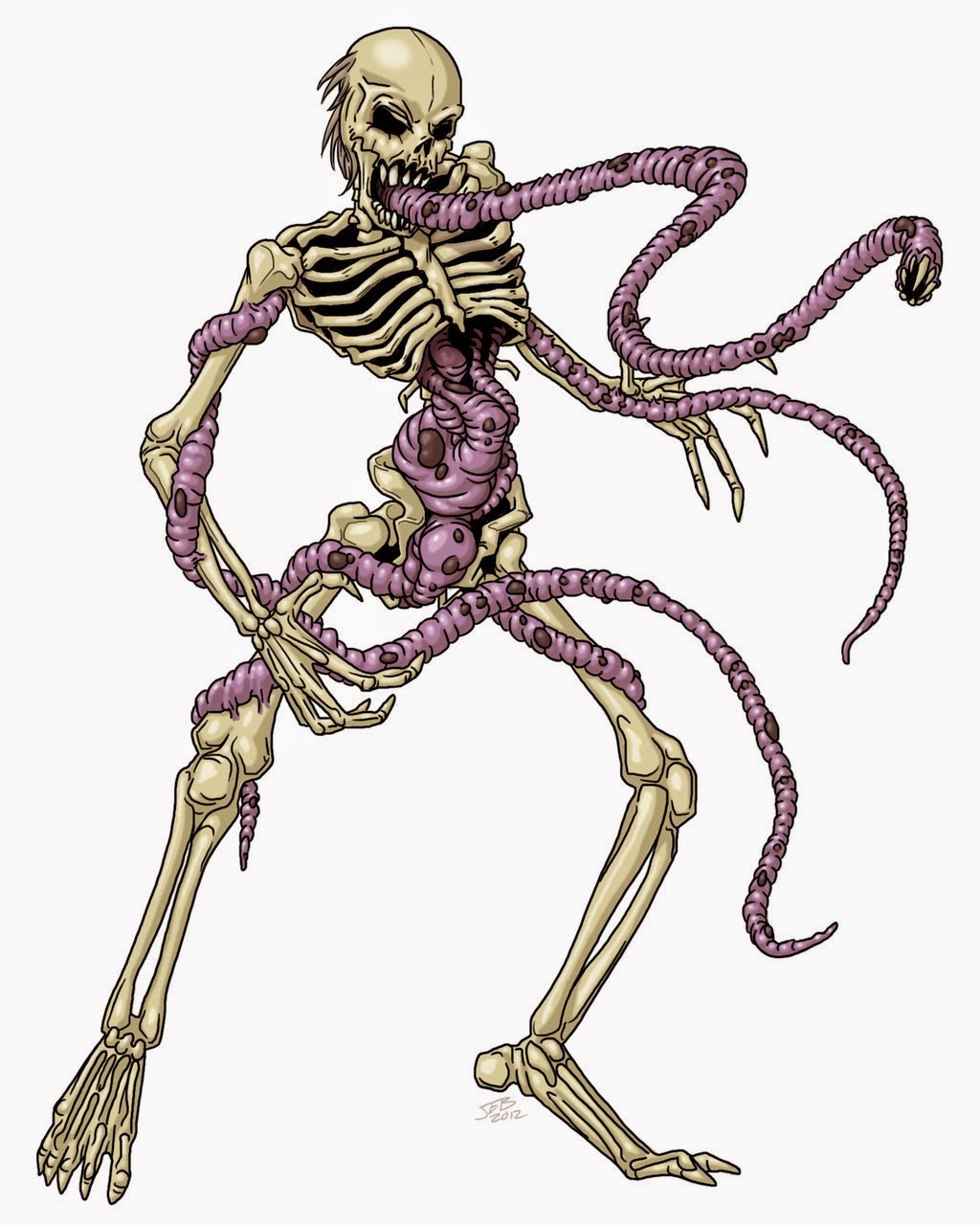 Mohrg
CR 5 (1,800 XP)
CE medium undead
Initiative +4
DEFENSE
AC 18 (dexterity plus natural)
HP 91 (14D8+28)
Damage/Condition Immunity: poison, disease, necrotic
OFFENSE
Speed 30 feet
Multiattack the mohrg may attack twice with its slams or once with a slam and once with its tongue
Melee Attack – Slam +7 attack (reach 5 ft, one target) 2D10+5 plus target is grabbed (escape DC 15 strength check)
Melee Attack – Tongue +6 attack (reach 5 ft, one target) gains advantage to attacks on a grabbed target; target must make a DC 15 save vs. paralysis or become paralyzed for 1D4 minutes (target can make a save at the end of each of its turns, ending the effect immediately on a success).
Statistics
STR 21 (+5), DEX 19 (+4), CON 14 (+2), INT 11 (0), WIS 10 (0), CHA 14 (+2)
Languages: common, but many mohrg cannot speak
Senses: darkvision, perception +2 (passive 12)
Skills: Athletics +7, Stealth +6
TRAITS
Create Spawn: creatures killed by a mohrg rise immediately as zombie with a movement speed of 30 ft (instead of 20 ft typical for most zombies that have had time to rot). When this happens the burst of necrotic energy heals the mohrg for 3 (1D6) hit points per hit die of the slain creature and the mohrg gains the benefit of the haste spell until the end of its next round. On occasion some mohrg generate new mohrg instead of zombies as an effect of slaying a foe. These mohrg are exceptionally dangerous. When a mohrg slays a target, there is a 10% chance that it returns as a new mohrg instead. At the DM’s option any evil character slain by the mohrg has a 50% chance of returning as a new mohrg.

Mohrg are terrifying undead forged from the vile souls of serial killers and murderers. They resemble skeletons with a writhing mass of organs and flesh in their body cavity and skull, from which emerges a hideous tentacle-like purple tongue covered in paralytic slime.

Mohrg are noted for their unrelenting sense of commitment to the evil ways that led them to their fate. When mohrg gather in groups this can quickly lead to a unique and terrifying epidemic of undead in the form of zombies and new mohrg.