Demiurges of Chirak: Milina, Daughter of the Betrayer

Doing lots of work on the 2nd edition Realms of Chirak when I'm not being distracted by my S&W retool of Sarvaelen. Here's a write-up on the demigoddess Milina....for those of you not familiar with Chirak's divinities, the short version is: the pantheon of gods died in an apocalypse, and the only "divine" figures in the world of Chirak today are aspiring mortals who have found one of the surviving Zodiac Stones that contain the divine essence of the fallen gods, and seek to unlock the secrets within which will grant them true godhood. 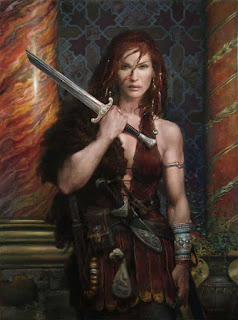 Milina
Milina is the daughter of Minhauros, and she at once loved and hated him. Milina holds a shard of the Taurus Stone which carries her down the path of the demiurge, and she is now the sole keeper of the essence of the stone (the remainder is kept on the Isle Outside of Time). She was always opposed to Minhauros, yet was his unwitting pawn on more than one occasion, including leading Mardieur Mardieux to Minhauros' rotting corpse where he was ambushed and murdered (long story), and Minhauros’s cultists then imbued the vestige spirit of the dead god into Mardieur’s body with the power of the Taurus Stone. It was with this action that Minhauros returned, the first true god to walk the lands of Chirak in twenty-six hundred years, and once again began his bid for world domination and resurrection.

Milina was discharged of whatever unknown pact she held with her father after his resurrection, and after his subsequent death three years later during the Siege of Barcen she disappeared. Milina now wanders the Realms of Chirak seeking enlightenment and the means to heal the corruption Minhauros wrought through the essence of the Taurus Stone. She has discovered that this is an onerous task, for she seems to be cursed with a taint of chaos due to her father’s nature; she finds it difficult to do good without also sewing discord in her wake.

Though Milina seeks to heal the corruption of the Taurus Stone as its avatar, she wrestles constantly with the evil that she inherited from her father. This perpetual struggle has manifested on more than one occasion as she is compelled to do great harm, then work to make amends.

Milina’s cult is small, and her following does not seek many followers due to the reluctance of the goddess to grow her own cult. Her priests who have met directly with her realize that she fears that the curse she labors under with the stone will also transform her cultists, but the wisest priests of her flock point out that this may be a necessary process; that her destiny may be to carry an aspect of both order and chaos within her, perhaps for a very long time until the spiritual taint of Minhauros is at last lifted from the Taurus Stone.

Milina’s shrines and temples can be found in secretive locations throughout the Kaldinian Isles where the lawless descendents of the Sea Kings find her quite popular. She has also found popularity along the western shores of Grelmaine and even in the murky lands of Xaxican; she is regarded as one of the 113 demon gods by the Xoxtocharit, which irritates her to no end, especially when a Xoxtocharit priest uses a summoning ritual on her; Milina’s demon taint from her father is enough for her to feel the compulsion of the summoning.

Milina’s three largest temples can be found in Westgate, the Freeport nominally allied with Espanea, where a fierce band of expatriates continue to worship her and some even still worship Minhauros. Another temple is said to be found deep in the mountainous lands of Masiria, and a final great temple is said to lurk somewhere in the far east, where the Skeledani Nomads rule. That temple is said to have once belonged to Minhauros, but a prominent gnoll shaman had a vision of the god’s demise and quickly converted his entire flock to the worship of Milina.

Milina’s Cult in Dungeons & Dragons 5E:
Followers: Milina’s doomed nature as a demiurge of chaos who tries to become a lord of order attracts the attention of those with a torn or dualistic nature, perhaps those who have a desire for authority but a tendency toward anarchy. She is especially prone to gaining the attention of hermits and madmen who for some reason, often trying to commune with her. Her total cult following among humanoids is believed to be somewhere around 2,000 strong, but it is more than ten times that when you factor in monstrous denizens such as gnolls, ogres and minotaurs.
Profile: Milina’s cultists gain access to the trickery domain.
Alignment: Milina’s actual alignment is chaotic neutral with good tendencies. Milina’s outward conduct confuses many as she appears to be neutral good (and any detection spells will indicate such). The reason for her strange alignment issues is that the Taurus Stone itself is still heavily corrupted by Minhauros’s use and radiates a chaotic evil effect on her spirit and those around her.
Cultist Alignments: Milina’s cult tends toward chaotic neutral to evil in the east, neutral evil to neutral good in the Kaldinian Isles and is all over the place in the west, though the cultists in Westgate fall firmly on the neutral evil side. She has a handful of clerics who have embraced her duality and who are actually neutral good or chaotic good. These clerics and followers tend to be the ones who have the greatest empathy for her plight of nature.
Armament of the Demigoddess: clerics of the demigoddess favor short blades (shortsword, dagger) and shortbows as these are seen as iconic of the goddess.


Milina was last sighted in the region of Shaddizhar, near Arenjun, and it is believed she was investigating the enigma of the “forgotten god” cult that manifested in that region. That was four years ago. There is a rumor that she may currently be somewhere in the region of Xaxican, traveling with a Preservationist named Ascalar who has been writing a biography on her life. This rumor comes from a Grelmanic captain named Esvaradio who claims to have carried them northward on his ship, the Unfettered Pennance just a few months prior.

Cautious Demiurge: Milina has cast the clone spell to insure her longevity, restoring her in a grotto on a remote Kaldinian island. She will seek out her slayers with a vengeance, and to restore her ownership of the Taurus Stone shard.

Bond of the Taurus Stone: Milina has held possession of the Taurus Stone shard for centuries now, possibly much longer (her age as well as whether she is a direct daughter of Minhauros is sometimes called into question). She can sense the presence of the stone, either her own shard if it is taken or any other shard of the Taurus Stone’s precise direction/location so long as it is on the material plane.

Shard of the Taurus Stone (unique, requires attunement): this divine artifact grants Milina the following traits. The stone is embedded in her chest and can only be removed by force when she is reduced to zero hit points or otherwise rendered helpless. Each of the  following powers becomes unusable if the stone is taken from Milina, but only those with a * after the title are initially available to a newly attuned user. The stone’s powers include:
Demiurge Saving Throw Bonus:* the Taurus stone lets Milina roll advantage on all Constitution saves. She gains her proficiency score on all attribute saves.
Magic Resistance: Milina rolls with advantage on all magic saves.
Stoneskin:* the bearer of the Taurus Stone may invoke stoneskin; this ability is restored with a short rest.
Ageless:* while bearing the stone the user does not age.
Fire Immunity: the bearer of the stone gains immunity to fire damage.
Spell Restoration:* once per day the bearer of the stone may recover one spell slot as a bonus action. If the bearer does not have any spellcasting ability then the bearer gains the ability to cast burning hands that may be cast once at his or her level of ability with intelligence as the magic attribute.
Legendary Spell Mastery of the Demiurge (recharge 5-6): at the end of a target’s turn the stone-bearer may invoke one of the following spells as a legendary action at 20th level of effect (+13 attack, DC 21): flesh to stone, wall of stone, wall of fire, fireball, disintegrate, meteor swarm, shapechange, incendiary cloud.