Tales from the Watchers of the Sullen Vigil: The Mountain City of Asvinar

I'm working on a new scenario, which takes place in and near the following city... 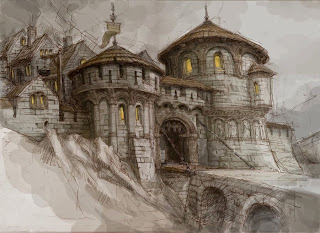 Asvinar is located 175 miles southeast of Aelghast along the banks of the Senderan River valley where it emerges from the Southern Droamspire Mountains (nick named the Claw Mountains locally).

Asvinar is a modest city which thrives on the mining operations in the mountains as well as brisk trade with the coastal port and capitol of the kingdom of Aeronost, Aramen. Most of the raw iron ore in Aeronost comes from this region, and it has made many merchants and prospectors wealthy men. Less common but much coveted are the mines which tap upon precious metals such as gold and silver.

Asvinar has a friendly connection to three local nonhuman tribes. First of these relations are the Brunendar dwarves, a clan of dwarves who dug up from the depths of the underlands a little over a century ago and after a brief period of tense relations forged a friendly alliance with the ruling baron of Asvinar at that time, Lord Trenton Gostimer.

The third of the nonhuman tribes in this area is the Fallindreth elves. These mountain elves are an exiled tribe descended from the Ilmarain elves of the Summer Court. Little is known of them; they have been in the mountains for at least four centuries, and regularly engage in trade and commerce with certain mountain villages while harboring a deep suspicion of the merchants, soldiers and miners out of Asvinar. The recent presence of the Brunendar dwarves only made things worse, for unknown reasons.

Asvinar is home to about four thousand citizens (mostly human, with some halflings and dwarves), and a seasonal population of migrant workers for terraced farmland. A larger year-round population of miners brings in many strangers, but the Aeronost merchants who prosper from their operations don’t care; they need whatever labor they can afford, and hired blades to protect them from bandits and monsters. The city in turn responds by profiting from the stray coin these laborers will spend when on leave from the mines. Though the priests of the goddess Nevereth speak poorly of the gambling halls and dens of sin which have sprung up in what is called “the mountain quarter” of the city, Baron Feredath chooses to take no action, for his family quietly profits from several such establishments, even as he runs six of the two dozen-odd mines in The Claw.

Terrain in the region is arid and desert-like, with scrubby trees in the mountains. The highest mountains in The Claw are around 12-13,000 feet in height, far short of the high mountains in south western Atlenar. Like much of Aeronost the region is rife with succulents, mostly in the form of large-barrel bodied cactus. Overland travel without roads is tough going. Roads out of Asvinar lead north along The Claw into northern Aeronost and the banks of Lake Vunares, and east along the river to the coast and the capitol. One forlorn road, well-kept but poorly traveled winds out to Aelghast.

The Mountain Quarter: this is actually a stretch of civilization running along the roads that lead up into the mountains, and eventually branch to head out to Aelghast or Lake Vunares. About a mile of road is occupied by numerous taverns, bars, gambling dens and brothels. The business stays outside of Asvinar’s city limits but it’s reputation is well known and despised among the locals. One notable personality here is Warden Taelen Doar, who acts as an ostensible “peace keeper” hired by the Baron to make sure the quarter is peaceful. He relies on a group of two dozen of hired mercenaries to do the job.

Gostimer Keep: the sea of power in Asvinar and center of power for the mountain province. Baron Anton Feredath is overlord of the land, and also a stakeholder, having six successful mines in operation. He keeps a standing garrison of two hundred soldiers that is a mix of local men and hired mercenaries out of Aramen or Catalone.

The Watch Tower: The Watchers of the Sullen Vigil maintain a tower at the highest peak overlooking the western passage out of the mountains. The Watch Tower is sometimes called Hawk’s Rest as it is often the favored perch of local hawks. A lone member of the Sullen Vigil named Trevor Kathin maintains the tower, which serves as a restpoint for knights of his order as well as a trading post. The tower affords a view of the west, including the passage all the way to distant Aelghast.

Temple of Nevereth: located along one of the terraced levels of the city in the river valley where Asvinar rests, the temple of Nevereth is a beautiful cathedral-like structure noted for its impressive stained-glass windows which some claim were saved from an older Camrinal temple long ago. The high priest of the temple is Elder Tunin, a man who in his youth was part of the crusades of Aeronost some forty years ago to exterminate the remnants of the cults of the old gods in Thaerinal to the south and (less successfully) among Mandrelavas. As an older man he is troubled by the sinful behavior that the mines bring to Asvinar but his spirit is no longer what it was. He does have a contingent of paladins in his service, who identify themselves as the Knights of Nevereth’s Tears in reference to a reliquary in her temple, place in the center of the holy symbol of her order in which is believed to be tears shed by the goddess herself at the destruction of Camrinal. These paladins spend much of their time seeking out evil cults in the mountains, but mostly only succeed in fighting an occasional monster of bandit group. The lead paladin is Traina Evenmore, a blond woman of thirty years who secretly delights in combat despite the pacifistic directive of her faith.

The River Quarter: located at the base of the valley along the river, this quarter of the city is dominated by mercantile trade, shipping centers, the river docks, and a cluster of local halflings who have acclimated to life amongst humans. A refinery for ore is also located here just down river, as is a lumber mill. The woman in charge here is Lady Tartessa Vindrese, a half-elven woman (exceedingly rare) of the Vindrese lineage out of the capitol. Her father Golan Vindrese placed her in charge of his mining operations, and to get her out of the Capitol where she was causing much trouble. Vindrese continues to be a problem locally, as she secretly runs many of the operations in the Mountain Quarter as well as the thieves’ guild locally which has an ongoing quietly run protection racket amongst the shipping guilds and barge owners.

The Dwarven Quarter: home to clan Brunendor, this is where about five hundred dwarves live in a section of the upper valley that they have turned into a deeply carved catacomb of homes, businesses, refineries and smithies. Vaken Durnagor is current clan lord, the clan itself named after the legendary hero of their ancestors, Brunendor the Axe. Durnagor is a typically burly, dour dwarf of middle years with three wives and four children to his name.

The clan puts a certain measure of effort into excavating the depths of the earth and finding the connections and passages to the underlands in this region. They were driven out of the depths of the earth a century ago, but have spoken little of what it was they fled from….or continue to watch out for. The clan maintains a standing militia of its own, 100 strong, which regularly forges into the depths to slaughter humanoids such as orcs and goblins and keep the old dwarven roads clear.
Posted by Doctor Futurity at 6:00 AM