Vumaskans, the shrewd merchants and rogues of Pergerron (D&D 5E and S&W)

Since I've been getting back in to Swords & Wizardy lately I think I'll start dual-statting my Pergerron entries for both D&D 5E and S&W Complete. After much procrastination I have finally written some details up on the vumaskans of Pergerron....a mercantile race of green and blue skinned half-giants aimed at the spirit of the planetary romance genre: 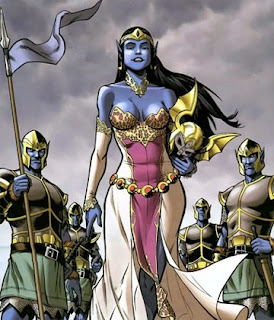 The vumaskans of Pergerron are considered an indigenous race, one of several (which include the elves, dwarves, atakans and orcs) that predate the appearance of man and may have been created from the dreams and musings of the Primordial gods. Though they are identified as one of these elder races little has been written of ill-will toward the vumaskans by humans; it seems that the bulk of the ire in ancient times was reserved toward the great empire of Sar, which was dominated by elves. As such, it is reasonable toexpect that the vumaskan kingdoms of Asparta to the far east may in fact have much longer lineages than the human kingdoms which arose in the last one thousand years in the wake of the fall of Sar.

Physically vumaskans average 6 ½ to 7 feet in height, almost always towering over mortal men. They have distinct skin tones, varying in hue from aquamarine to light green and cerulean blue. Vumaskan women tend toward greener skin tones while the men are inclined toward blue, but this is only a generality and not always true. About ten percent of the population have distinct ochre, yellow or jet black skin tones of shocking tonal quality. Once in a generation an albino vumaskan is born with shocking white skin. Such vumaskans are regarded as either sacred or profane gifts from the gods, and are always blessed with significant magical talent. Vumaskans are also known for being polydactyl, with four fingers and two thumbs on each hand, and six toes. This polydactylism makes them especially fine manipulators, and contributes toward their reputation for producing elaborate and detailed art.

Vumaskan culture is one of mercantilism and trade. The kingdoms of Asparta are much like the human lands of Anansis and abroad: a loose collection of city-states, although they pay nominal respect to the Caliphate of Dakarta, which is regarded as the spiritual center of vumaskan civilization. The Caliph of Dakarta, called Manaskan Draei, is considered a prophet of the primordial sea god Trigaril. Manaskan Drei’s wisdom is believed to be imparted directly from the Primordial himself. Aside from Trigaril, the vumaskans pay close reverence to Yoka Vataras, the only other primordial they continue to worship. Belief in the Enkanneth is also strong among the vumaskans, which helps to explain their good relations with humans. They especially favor Tekastei, a sort of local culture hero among the vumaskans who is seen as the Enkanneth that befriended the vumaskans during the ancient war against Sar and the fall of the Primordials, and the one who allegedly “tamed” the beastly nature of Trigaril.

Vumaskan language is a practical language which employs a surprising number of adopted words from the human Anansic tongue (common) as well as elvish and ataakan. The vumaskan relationship with the atakans is an interesting one: it is known that their lands overlap with the remnants of the fallen atakan empire, including the famour ruins of Pavagar and Ulhambra in the region of the Starry Wastes. Most vumaskan cities have significant populations of atakans, who willingly work as mercenaries and agents for the vumaskans. Among ataakans in this region of the world they have adopted a curious reliance on the vumaskans for broad political leadership, refraining from the need to rule themselves outside of their family clades. The vumaskans are fine with this, and treat the ataakans as equals while letting them self-govern within their own communities.

Among the men of Anansis vumaskans are regarded as wealthy foreign traders and merchants who bring exotic goods, fabulous art and exotic spices. Vumaskans are known for their production of opium as well, and are a principal supplier of such to those city states which do not frown upon its use (usually inland cities such as Samaskar allow opium use without restriction, while more conservative cities such as those which worship Abia along the Silver Coast have all but outlawed its use).

Vumaskans are excellent choices as player characters, though uncommon in lands outside of Asparta. They have the following traits:

Vumaskans in D&D 5E:
Attribute Modifiers: vumaskans gain +1 Dexterity and +1 to Strength due to their polydactyl nature and larger physical build.
Movement: 35 feet; the larger average size of the vumaskan gives them a longer stride.
Shrewd Negotiators: vumaskan culture encourages quit wit and fine negotiating skills. As such, vumaskans start with proficiency in Persuasion and Deception.
Fine Manipulation: The six-digited hands of vumaskans with two thumbs make them exceptionally talented at fine manipulation. They gain proficiency in Sleight of Hand.

Vumaskans in Swords & Wizardry:
Attributes: Vumaskans generally have better strength, dexterity and charisma than a normal human; if you are using optional attribute requirements they should have at least 9 in each of the above to qualify for vumaskan as a racial option.
Shrewd Negotiators: vumaskans can be shrewd negotiators. Typically this means in traditional old-school form that the GM should consider any reasonable persuasion from the player to be indicative of the shrewd and manipulative vumaskan’s acumen for negotiation. However, if you would like a mechanic for this, try the following: if a vumaskan is speaking with an NPC and is trying to convince him to do something out of the ordinary (but not harmful) the GM may opt to let the target make a saving throw against common sense to see if he buys into whatever the vumaskan is selling. Alternatively you can make the vumaskan PC roll against Charisma (D20 equal to or under) with a penalty set by the DM (equal to what seems right, or 1/4th of the Hit Dice rounded down, or if the target has a Wisdom score apply a penalty of -1 for every point over 14).  Success means the target must make a saving throw or think the vumaskan’s idea is really great.
Fine Manipulation: vumaskans gain a +15% bonus to Delicate Tasks & Traps and Open Locks skills.
Class Options: vumaskans can advance without limit in cleric, fighter, thief and magic-user classes. They may advance to 12th level as assassins or monks and may multi-class as cleric/fighters, fighter/thieves or thief/magic-users. There are no vumaskan druids, rangers or paladins. If you are using an expansion (such as the Player’s Companion) with bards as a class then vumaskans may advance to 15th level as bards. 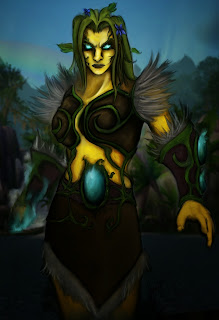