It's been a long couple of weeks. I've been out of blog steam, mostly I think because everything else in life has been sucking up all my free energy, including some sickness which has been lingering unpleasantly throughout all of this; work has been in overdrive, and when I get home it's a lot of time with my son (and one night of a 5-hour binge dive into the PC version of GTA V which I was happy to see runs on my older PC just fine).

Michael in GTA V is such an awesome character. That entire game is like a Carl Hiaasen or Tim Dorsey novel writ large in video game format.

Anyway, more content eventually! I have had these burn-out phases in the past, but usually disguise them by loading lots of pre-programmed blog posts. However I've been sufficiently burned out that I haven't even had time to load up canned content....yes, that's some serious burnout.....

On gaming I will mention that I picked up Iron Kingdoms Unleashed on a lark. This is a weighty tome and really wild, a weird steampunk vs. monsters universe that holds its own well. Good enough that I found the original Iron Kingdoms RPG from 2013 and may get more. It's like a Warhammer game that people who hate the Warhammer universe and lore (but love the conceptual space) can appreciate. 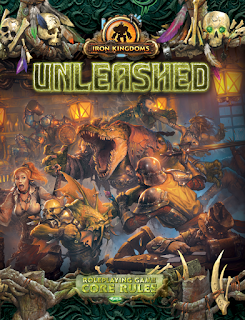