Have I ever posted this before? I think I may have put it in an old issue of TSS....but since this has been a tough week for generating posts, I think now is the time to offer up some sector data for a Traveller campaign I ran a while back. Easily useful for any contemporary SF game such as Savage Worlds Sci Fi, Stars Without Number or Mongoose's Traveller....

Sirianthus is a remote sector of space with only one ruling presence: The Sector Authority. The is stationed off of the prime world in the region, called Utopia Incognita. It was founded hundreds of years ago, and falls nominally under the rule of the Terran Authority, but ignores most other governmental influences, including the Stellar Concord. 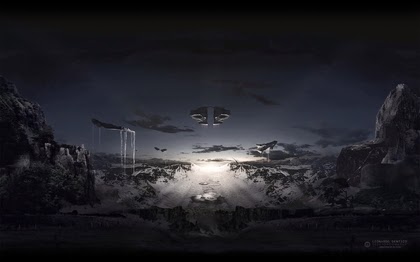 Sirianthus
System Data: single star system; 3 gas giants, 7 standard planets, 1 Type C civilian starport and 1 Type B Sector Authority starport
WPP: B8677702-2; note that the world is restricted by Sector Authority government (8) and law level (9).
Moons: Sirianthus has three small moons, called Eados, Tyrianos and Cleodor by the native.
Detailed Profile: SP: B; Size: 8; Atmos: 6, Temp: 9, Hydro: 7, Pop: 7, Govt: 7(8), Law: 0(9), TL: 2(12)-parenthesis reflect Sector Authority levels at the star port and by quarantine.
The Sirianthus Sector is named after the most unusual world in this sector, Sirianthus. Sirianthus is a remote, fascinating world with a climate suitable for humans, and holds two unique marvels: a vast network of ancient ruins that employed an otherwise inscrutable crystalline technology for almost all computers and functions, and a degenerate race of hominids called Sirianthans who dwell upon its surface in a barbaric culture that has grown up with a mysterious fear and reverence for the precursor culture that preceded them. These people call themselves the Erikathi, and they are unusually close to the same hominid genus as man, leading some to speculate that the are related to humans, and may have been part of a genetic breeding program executed by the precursors nearly one hundred thousand years ago.
Sirianthus is quaranteed an amber zone by both local and galactic authorities because of discoveries made by researchers on the planet. There is evidence that the otherwise fantastic remnants of the ruins of this planet are still functioning, and some act as gateways, opening wormholes to vastly different regions of the galaxy, or beyond. Indeed, some researchers feel that these are in fact quantum wormholes, opening up portals to parallel universes.
The first incident in which this portal technology was discovered led to the accidental lethal contact with an foreign alien intelligence. This species, dubbed the “presence” by the only surviving researcher from the incident, appeared to be a form of collective entity which rapidly studied, read, and absorbed the DNA of the researchers, then turned them in to puppet-like hosts, turning them around and infiltrating the upper echelons of the Von Neuman Scientific Research and Astrographic Studies Institute (usually just abbreviated SRASI). It was two years before the full story of what had happened to the researchers on site was revealed, and an unknown amount of data had been compromised. Efforts to free the scientists who had been puppeteered by the parasitic organisms proved deadly to all but one, who remains scarred from the experience, and manifested strong psionic talents afterwards.
Because of this incident, further research on Sirianthus has required that exceptionally careful effort be taken to insure the safety of the men and women involved. A second portal has been successfully activated since then, one which opened up on a remote airless world with additional precursor ruins, but to date the research team has failed to determine exactly where this world is in relationship to the source wormhole. 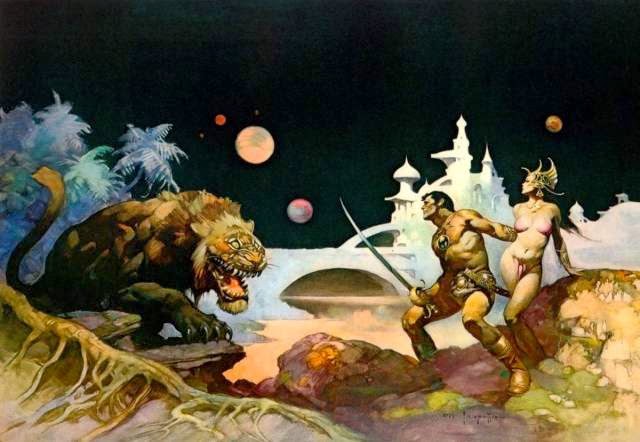 The Erikathi
Physically Erikathi look much like humans, but with a rougher demeanor, and physical traits that seem to place them closer to Neanderthals in appearance than homo sapiens. They are tentatively identified as Sirianthus Xenosapien for cataloging purposes. DNA tests have so far shown a possible link to humans approximately 100,000 years ago along the evolutionary chain.
Erikathi culture is diverse, and firmly rooted in an early age of steel, wind and horse power. There are dozens of small kingdoms and city states scattered across the three main continents of Sirianthus, and all are prone to bouts of warfare and intrigue.
Erikathi have three unique traits beside their apparent ancestral connection to humanity. First, the dominant religion across the many Erikathi cultural groups is centered on the fear and worship of what they call the “Haaki”, the gods of before. The precursor ruins are the center of this fearful worship, and the religious beliefs of the Erikathi center around placating their deities, keeping them “asleep” as it were. Erikathi belief is centered on what they call the Formless Void, where they believe these precursor “gods” have gone to dwell in slumber. The early myth tales speak of great atrocities and a casual disregard for the Erikathi, as nothing but fodder and playthings. Although it is believed that the Erikathi have existed as a meaningful “modern” cultural group for at least ten thousand years, no anthropologist studying the Erikathi believes that the precursors actually had a physical presence during the rise of Erikathi culture. All evidence of ruins studied suggests that the last active remnant of this ancient species disappeared fifty thousand years ago. Still, due to a high degree of psionic talent (more below) amongst the Erikathi, some researchers wonder if there isn’t some sort of programmed ancestral or genetic memory in place bringing up a recollection of these entities.
The second distinct trait among Erikathi is their predilection to natural psionic talent. This unusual potential is rare among most humans, but the Erikathi have as many as one in ten births displaying at least modest psionic talent. The ruins and their proximity are considered one possible reason for this, as many of the precursor sites have higher levels of radiation than normal, and over time a measure of natural and forced mutation could have accidentally led to this development. A second and likelier belief is that the precursors bred the Erikathi for psionics, tampering with them on a genetic level to induce stronger psionic talent. Some scientists are trying to discover the trace genes that lead to the development of psionic potential, to see if there is evidence that the genes are manufactured or even alien in nature.
The third unusual trait of the Erikathi is their surprising resilience to unsusual climates and ecologies. They have a stronger immune system, and have displayed a tolerance for several viral xenoforms that humanity is more susceptible to. The indirect evidence is that the Sirianthus ecosystem may in fact be an amalgamation of several different alien ecosystems, imported long ago by the precursors, and then forced together through genetic modification. Because of this, Erikathi are more resilient in foreign environments, and a few who have been illegally removed from the planet have thrived in industries such as pharmaceuticals and terraforming as researchers and explorers due to this natural proclivity and heightened tolerance.
The ecology of Sirianthus is a marvelous agglomeration of several different genera of flora and fauna from different archaic ecosystems across the galaxy. Although Erikathi are the dominant sentient species, several dozen lesser species have been identified as sapient or potentially so, although they are neither as dominant or aggressive as the Erikathi. Nonhuman members of the have accused human researchers in the area of showing an unfavorable bias toward the Erikathi and their importance on the world.
Today, Sirianthus is a quarantined world and only special research projects and citizens who pay for the privilege of visiting under strict guidelines, including restrictions on technology, are allowed to visit. As such, no technology greater than that presently available is allowed, and visitors who are not themselves psionic are given psionic dampeners to avoid accidental detection by telepaths.

Erikathi Characters
Sirianthus as a homeworld has the following traits: agricultural, low technology.
Erikathi may choose from the following career paths although barbarian is the most common, restricting any and all choices to those appropriate for Tech Level 1-2: infantry, worker, barbarian, wanderer, scavenger, artist, performer, thief, enforcer, pirate, and any psionic career. Any inappropriate skill (requiring better than TL 2) must be substituted by a more appropriate skill.
Erikathi have a couple racial traits unique to their species, despite their similarities to humans: Notable Endurance +2, and Psionic. This reflects the natural predilection of the species towards psionic talents, and the unusual adaptivity of the Erikathi to unusually diverse biohabitats due to their own ecologically diverse homeworld.
Next....the rest of the sector!
Posted by Doctor Futurity at 6:00 AM