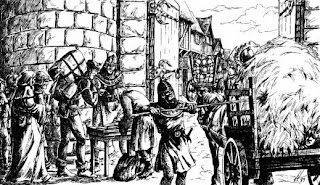 First it started with the dndclassics.com release of the original Greyhawk boxed set from 1980ish. This was a nice scan of a product that runs rather high in price on Ebay, and a look into one of the first published settings for an RPG (and the first officially defined setting for D&D). As a kid I knew it existed but could never find a copy and have cash handy at the same time. By the time it was feasible other stuff like Runequest and Tunnels & Trolls were too busy taking my money instead.

Buck back to now...this budding obsession migrated to looking at what else they had on offer over there in the way of Greyhawk PDFs. This led to a mixture of excitement and disappointment when I decided to jump forward a bit and check out the tail end of the 2E-era "year 591 cy" setting, post "Greyhawk Wars" era from the early 2E days. This was cool, but the scans for "Player's Guide" and "Adventure Begins" were terrible. These are the two books that collectively define this era and are also the basis for the 3E Greyhawk material, I am led to believe....but for some reason the scans are atypically poor with cropped pages and a dismal grey-bleed background that implies the books might have been printed on some off-color paper or had bad watermarks/bleed-through.

This led me to find the books on Ebay, for surprsingly cheap yet pristine copies. No idea now that I've seen the original as to just why the scans on sale are so bad....I could make a clean scan easily (and am tempted to do so then donate it to WotC, if I could figure out the donation process in a legal way). 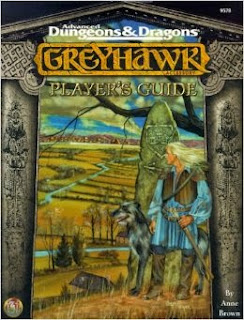 I'm rather enjoying exploring Greyhawk. Prior to...oh...the last few weeks Greyhawk has always been that old setting that I knew a bit about but never got to play in (or run) and mostly was a sort of relationship by association, as I converted most modules from the setting to my own worlds. In a way, that puts a bit of Greyhawk in all my games already.

But now I'm tempted to run an actual campaign in Greyhawk, possibly due to subversive propaganda, but also possibly because it's something that has the veneer of being both old and familiar and fresh and new to me simultaneously. If I do it, I'll set the game sometime around the year 591 cy, and start with the other three books I picked up: Return of the Eight, The Star Cairns and Crypt of Lyzandred the Mad. These are good modules...and the only reason I never investigated all of this before was that I just never used pre-made setting material back in the day unless it was obviously easy to reskin. It's not Greyhawk, personally....I didn't pick up Forgotten Realms stuff, either.

If this happens, I'll have to post some details on RoC. The next question is: what system? There's a temptation to use AD&D 2nd edition as was intended for these tomes, but it seems silly not to do the conversion dance and use D&D 5E. On the other hand I recently acquired the Adventurer, Conqueror, King System (ACKS) and that seems like a really great fit for Greyhawk, at least with the "escalating from hero to king" part (in other areas it lacks a bit...no halflings, demons, or other D&Disms that are core to Greyhawk). There are other OSR games that could work well, too. Hmmmm....decisions, decisions. I'll probably sick with 5E, because that edition speaks to me like no other has, and it will let me do some Greyahwk to 5E conversion blogs down the road, too.... 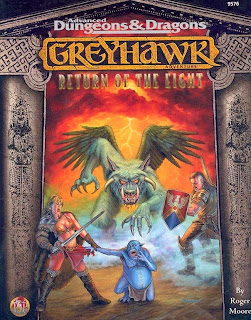