Continuing my efforts to dual-stat Pergerron for Swords & Wizardry as well as D&D 5E, I offer up some stat blocks for vumaskans and atakans in S&W Complete: 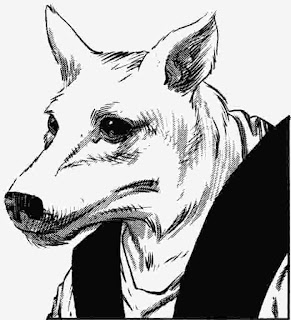 Atakan (jackal-men)
Hit Dice: 2+1
Armor Class: 3 (17) (plate mail and shield)
Attacks: bite (1D4) or by weapon: longsword (1D8) or javelin (1D6)
Movement 9
Alignment: law
Challenge Level/XP: 2/30
TRAITS
Scent: Atakans have a keen sense of smell which grants them advantage to detect the nature and approximate location of any target within 60 feet that could emit an odor (including invisible creatures or objects).
Hardy Desert Dwellers: Atakans are used to roughing it in harsh desert climates.. Atakans can go for up to one week without water before experiencing dehydration effects.
Character Racial Options: Atakans gain both of the above abilities (scent and hardy desert dweller) plus the bite attack (1D4, Strength based). Atakans may advance without limits as fighters, thieves and magic-users. They may advance to level 9 as clerics. Atakans may multiclass as fighter/thieves.

Atakans are tall jackal-headed men who have the bodies of humans but the heads of jackals. They are not related to jackalweres, which are a cursed race infected with abyssal taint….the atakans are an ancient race which claims to predate human and elvenkind’s existence in the mortal realm. In Pergerron atakans dwell mostly in the wastelands outside of the human city-states of Anansis, and many atakans dwell in the vumaskan lands to the east. They are suitable as a player-character racial option.

A typical atakan mercenary group will contain 3D12 atakans with 2 hit dice and the above stats. For every 15 atakans their will be a 4 hit die leader. There is a 50% chance that an atakan mercenary group is working for and escorting 1D3 atakan magic users of 1D6+1 levels of experience, or 1D4 vumaskan merchants (each of which has a 25% chance of having 1D8 levels of magic user or cleric). 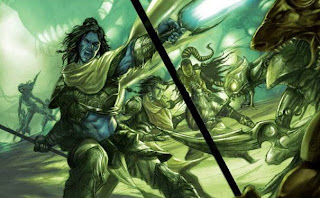 Vumaskans
Hit Dice: 2
Armor Class: 7 (13) (leather armor)
Attacks: by weapon, usually longswords (1D8) and long bows (1D6)
Movement 10
Alignment: law
Challenge Level/XP: 2/30
TRAITS
Shrewd Negotiators: vumaskans can sell a funeral plot to a lich. When negotiating with a vumaskan, the opposition must make a saving throw to avoid buying up whatever bridge the vumaskan is selling.

Vumaskans are tall (6 ½ to 7 feet) human-looking men with six digits on each limb (an extra thumb) and skin colors in a hue of greens and blues with occasionally more exotic tints. Vumaskans don’t travel in large groups, but usually are accompanied by atakan mercenary companies for protection. Any given vumaskan has a 25% chance of being gifted in 1D8 levels as a magic-user (1-3) or a cleric (4-6).
Posted by Doctor Futurity at 6:00 AM