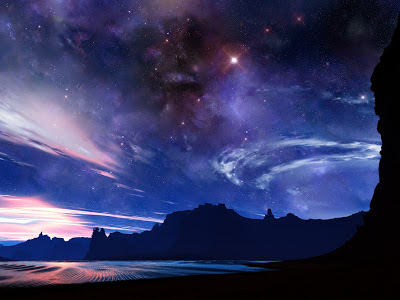 The Stellar Cartography of Chaos Space around Astrophikus

Because of the elaborate and advanced use of flying ships called Spelljammers, Astrophikus is a rare interplanetary civilization. The various kingdoms and empires of the world are all reliant on this interplanetary and planar travel, creating an unusual local enconomy in which the planet’s greatest empires depend largely on imports and exports for their continued subsistence.

Spelljamming vessels are designed to travel through the planar realms, and from the planar realms they can reach other distant points of existence in the material realm. Spelljammers are capable of traversing the , the arcane term for the depths of space, a vast void with no air and an imcredible chill. Spelljammers are built out of the material typical of sailing ships, but their hulls are plated with the rare bronze-like metal called orichalcum, which acts as a super-conducting material for magical force, allowing a spell caster to imbue the metal with flight and other properties enchanted in to the hull. For those vessels which traverse the ether, these enchantments include gravity and an air envelope, as well as protection from the coldness of space.

In the realm of chaos space there are several other worlds that are regularly traded with, including Hyskortius, called the “Winking Eye” by some, a curious water world with no land, as well as the vast inner world of Lingusia, a great disc-like construction with twenty times the land mass of Astrophikus. Lingusia is known to be a prison as well, much like Astrophikus, though it harbors twelve ancient entities called the Krakens. Lingusia, unlike Astrophikus, has no orichalcum of its own, and its civlizations lack space-faring capability. Nonetheless the Astrophikans allow for travel to and from this immense world (around which the sun and Astrophikus itself revolve) for trade of more conventional goods, although they are usually limited to those cities which are open to the presence of flying magical vessels from strange lands (Octzel and Naminthia are most well known for their appreciation of ether merchants.)

Because Astrophikus and the sun both revolve around the great disk world of Lingusia, this creates some unusual astronomical alignments and conjunctions. All of these phenomona are given special mystical properties around which great ceremonies are held. When Lingusia, the Sun, and the moon Metaros reach a conjunction, for example, that is considered a time of great prosperity and all warfare must cease for one year, during which even criminals are excused of their crimes by the Vulmeadean Empire, for example.