This was the conclusion of the first Season (opening campaign) arc for the storyline. I'd committed to running White Star through the end of February, and here we are! The plot ended on a cliffhanger, teasing at the direction of events to come for Season Two. 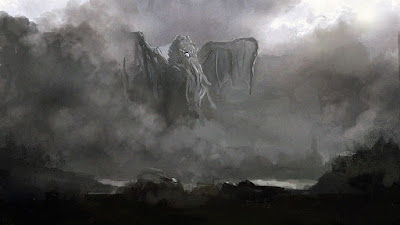 The crew of the Juan One (alias Star Dolphin) cruiser had survived their various encounters on the Curiosity 796 starport and prepared to leave the station with the dark star mind core stowed away in their cargo hold. A few more events took place on the station:

1. Tamralese the Imperial Loyalist met the Inquisitor Horus in his newly cloned body, with fresh mind imprint (post death from last week's encounter) and after a lengthy interrogation/discussion Horus charged her with approaching her allies and making them a significant credit offer to turn over the mind core and any data on Tesla Dane....and to discharge them from service to Captain Lars. He needs her to buy time while he finds replacements for his lost inquisitor team, and doesn't expect his offers to be accepted.

2. Erin had met with the station governor and been given a message broadcast from Tesla Dane received a month prior. The message provided coordinates and a message about finding her at the feet of the "Incumonitrox." Her holoimage in the message shows what looks like the foot of a great beast-statue behind her. The coordinates put them in subsector 12, uncharted space with an unnamed star system.

3. The crew gets the ship repaired and also scour the hull for tracking bugs, finding many. They also get their funds from Captain Lars at long last and spend a lot of money. 101010 tricks himself out...he's now a rolling gun platform, essentially.

4. While at the comm relay/bank securing funds they run into Tamralese doing the same. She pitches the Inquisitor's ideas to them with her own spin. The crew is not interested.

5. The crew realizes qinlons have taken an interest in them in the marketplace and they make a dash for their ship. A firefight ensues as the ship powers up, but the qinlons have a gunship blocking escape! A close quaters firefight results in the qinlon vessel being destroyed thanks to some timely initiative rolls. They escape the station. Unbecknownst to them, the Inquisitor Horus has hired the qinlons to do his dirty work while he regenerates his inquisitor agents.

6. The ship heads for the coordinates Tesla Dane provided. They find an uncharted star system with some evidence of massive trauma: a world is missing, and a moon from that world was captured in the orbit of a gas giant. The moon is heavily terraformed and shielded, and shows a great city built around a sky-scraper sized statue of a cthulhoid beast....the Incumonitrox.

7. In orbit around the moon is a space yacht with a star knight snub fighter tethered to it....it's Tesla Dane's ships! They speak to the AI of the ship named "Sally." Sally helps the Juan One/Star Dolphin's AI release it's own locked databanks...the ship suddenly remembers it's history under Captain Ephemeron and Tesla Dane. The crew tethers to the yacht, but not before finding out that there are numerous void lord weapons platforms cloaked in orbit, closing in on them like a chinese finger trap....they are okay as long as they don't try to leave.

8. On the space yacht they find out that Tesla left the ship and went to the moon below. The ship reveals a secret: a cyborg named Gavon in suspended animation who's blood is a cure for the Von neuman nanovirus plage. They extract samples, innoculate everyone who needs it (which is pretty much Dirk and Sam at this point since Tamralese, Erin and Dyvinil are slowly changing in to strange-matter from the gift of the Stellar Librarian; an 101010 is a robot), and then they break in to the hidden cargo module and innoculate frozen Captain Ephemeron. The cure doesn't remove the virus, but it quells the nanovirus and makes it controllable by the host...Ephemeron will remain a converted cyborg, but retains free will and control over the nanovirus.

After discussion with Sally they crew piece together that the dark stars allegedly created the very first star knights to fight the Incumonitrox, which were making "incursions" in to other universes, destroying them as they did. She says the Great Attractor region of our universe is evidence of an ancient incursion attempt. The first star knights were warped in this battle, creating the void lords.

9. The crew, with Ephemeron, decide to take the cruiser to the surface of the planet to the exact coordinates Tesla provided. They land in a large open park in the city, at the foot of the giant statue of the Incumonitrox. Here they find a great bowl-like depression with an impressive hoop-like stargate in the center. The gate has equipment with a fusion reactor already set up to power it all up. On approach they trigger an activation by accident and the stargate opens a portal...and an elder Void Lord named Corvus steps out!

10. Corvus asks them if they are allies of Tesla Dane and they assert they are (oops) so he proceeds to try and kill them. It's a tough fight....he's a 10 hit die Void Lord with level 4 meditations, a personal shield AND an energy absorbing glove and in the end they drive him back in to the stargate, but it was a tough fight. Erin pursues....only to discover the portal opens up into an immense Void Lord military compound at the edge of the galaxy, and Corvus is preparing to send his army of void lord soldiers through!  She retreats and they quickly disable the power source to close the star gate.

11. While checking out the area they find a mysterious hand in a glove attached to a star sword. There's evidence of blood spatters....they track it to the city, and find in one of the mysterious, monolithic buildings made of an unknown composition the body of an extremely old woman, something that modern humans rarely see anymore due to anagathic treatments. She has a data crystal....and on it after a decryption is a message from a woman claiming to be a colonist in Diaspora Sector on a world called Saber. On the recording she says she came through the star gate to warn Tesla's allies that a tachyon wave was en route, and to find a way to escape....but the message is damaged and hard to make out details on. The crew is mystified....records indicate Diaspora Sector is one of the original sixteen sectors of Old Human Space, from the first two centuries of slow FTL colonization by humanity, before the Fourth World War against the Ascended Apes destroyed the old seat of human control (yes, you read that right). Saber was the first world on which evidence of sentient alien life was found, in the form of ancient, giant statues of tentacled winged things....

They also find lots of evidence the city was built and occupied by the telepathic mindoids, but all that remains are skeletons.

12. Anyway, the crew proceds to investigate the immense statue, and find a giant star gate built in to it's base, large enough to fly the cruiser through. They meet an ancient mindoid who is waiting for them, and explains that they are only the most recent of several visitors in the last month. He tells them Tesla Dane went through the immense portal to escape the ones that followed (presumably the void lords). The mindoid reveals a shocker: when asked about their obsession with the immense statue, he explains that the Incumonitrox were the "first beings" to exist, and that the mindoids worshipped them as trans-dimensional gods. He explains that the dark stars were actually a race of aliens which tried to steal the god-like power of the Incumonitrox and succeeded....this statue marks the star gate which opens up into the sacred world of worship for their kind, in an entirely different universe.

The crew decides to power up the star gate and pursue....as they do so, bizarre gravity waves are detected and strange phenomena in the sky wreak havoc with their sensors. Is this caused by the star gate, or by the tachyon wave the dead woman warned them about? They hurry up and pilot the ship through the star gate.

13. The other side of the star gate turns out to be another universe, one which is near the end of it's heat death with no visible stars left in the sky, and which has slightly different fundamental properties (such as a different cosmological constant, variation in Planck length, etc.). The moon-like world below is distinct as all across the horizon appear to be the giant mile-high statues of the Incumonitrox, but it turns out that they are actually alive....and moving, albeit incredibly slowly. In a valley below the great star gate is a vast plain of hundreds of additional depressions containing more star gates. A single one of these has a force field around it, holding an atmosphere.

14. Investigating the force-field covered star gate reveals another fusion generator to power the star gate and a camp, as well as an atmospheric scrubber/creator and a heating system (the temperature is just warm enough that the atmosphere in the shield bubble hasn't frozen yet). They warm it up and deploy into the protected area....and in the camp find another diary from Tesla Dane.

It turns out Tesla determined that the threat to our universe began when the people of Saber accidentally activated an ancient artifact on their world long ago, one which summoned the attention of the Void Lords in their insatiable quest to find the artifacts of the Incumonitrox. The Void Lords would take 1,500 years to arrive, but it was that day in 2209 that started the process. Her diary indicates that her goal now is to stop all of the future from happening by going back to Saber in 2209 and preventing them from activating the ancient artifacts....and destroying it all, if possible!

The crew realizes that they are facing the final star gate she passed through, one which moves back to their universe in both space and time. Do they pursue Tesla Dane? The coordinates on the small star gate can be replicated on the giant star gate that the cruiser passed through.... 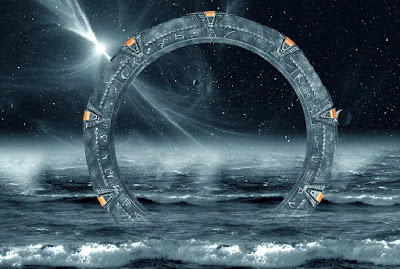