I finally have AS&SH in print, in its gorgeous little box with spiral-bound tomes within. The system is AD&D with lots of refinement...I really like it. The flavor is exotic, captures the feel of the pulp sorcery and sword genre remarkably well, and evokes the ghost of Howard, Ashton-Smith, Carter, Wagner and others quite handily. Anyway, if you're interested in what a typical AS&SH character looks like, here's my first: a ranger, ready to head off in to the world to die at the claws of Yithians or worse. Note that the ranger is one of a very modest number of core classes you'll recognize...there are a lot of interesting subclasses in AS&SH; it's part of the "options heavy" genre of OSR titles, which I really like. 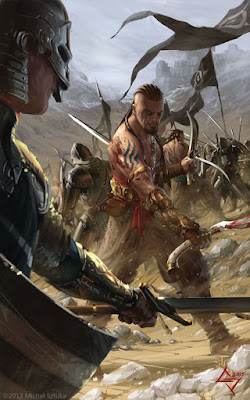 
Corvus the Grim, known to his comrades as Grimcrow, is an Ixian ranger who served under the monster hunter Laithos, who perished several years ago while thwarting the necromancer Sevixar. Laithos left his wisdom to Grimcrow, who while still inexperienced in hunting abominations nonetheless feels he is ready for the task. Though there are more than enough opportunities to hunt the abominations summoned by the sorcerers of Scythium in his native land, Corvus the Grim has decided to march out into the greater realm of Hyperboria in search of the most fearsome beasts from beyond the starry nights that he may slay them all, or die trying.

Abilities:
AS&SH uses a simpler die mechanic for physical feats, the "test of strength" as well as for Con and Dex which is a D6 roll against a target number defined by stat. It also allows a percentile roll for extreme feats, and that gets a +8% modifier if you have a class that uses that prime requisite.

Saves:
The system uses a single save modifier, with class-specific adjustments. This is a welcome borrow from S&W.....seriously, once you see the one-save mechanic in action it's hard to go back.

Armor Class:
AS&SH also uses descending armor class, but employs a "Fighting Ability" value which determines the column you look up your hit chart on. The hit chart appears to be consistent with the THAC0 concept for purposes of easy notation.....so the method in AS&SH is to Roll 1D20, add your bonuses to hit for the weapon and strength, and then see how close you get to THAC0 (or look up your chart). EX: Corvus rolls a 17 to hit, adds 3 for his scimitar skill (due to weapon mastery plus strength) and gets 20. he knows he hit AC -1 then, because his THAC0 is 19, so his THAC-1 would be 20. Later he rolls a 13, plus 3, for 16....so he knows he hit AC 3 (THAC0 19 minus 16 is 3). The format means it will make explaining AC easy to players new to the concept as it keeps everything consistent.

Action Resolution:
Since AS&SH is modeling AD&D mechanically, it actually addresses an action economy (action resolution) to handle multiple attacks per round. It's interesting to see this tightly defined....I've run AD&D multiple different ways when it came to the action economy. Given I have a strong, compelling desire to sun AS&SH I'll have to think about whether I want to stick to the action resolution system as presented, or play it fast and loose like S&W White Box editions tend to.
Posted by Doctor Futurity at 6:00 AM