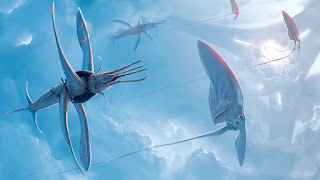 This time around was spent more or less entirely in spaceport Curiosity-796, orbiting the moon called Relic, in an otherwise dead star system. Relic has evidence of a vast civilization which wiped itself out 20,000 years ago...yet another victim of the Netherspace Sector curse.

The crew in summary had the following events take place:

1. Most of the crew ran out to find ways to spend money, then realized they needed to "call home" to the empire to get their stipend and pay updated. It turns out that the spaceport, a fringe of the surviving remnants of the Human Commonwealth, has a 2:1 exchange ratio for local Commonwealth Credits (CCR) and Imperial Credits (ICR) in the PC's favor. Yay. Interstellar Communications still take days to travel so they have a wait for their credits to arrive.

3. Tamralese hatched from her chrysallis, now made of strange matter from another dimension. Recovers memories....can tell something is wrong (she can feel the elctromagnetic bonds of force holding matter together, and nothing feels "normal" enymore), tries to get a pheremone implant and poor chopshop is blown up in the process when they try to graft normal matter to her body. Boom.

4. A grumpy alien with a mysterious key to Cargo Hold 779 brings it by...he recognizes the ship, says Tesla Dane wants the key to return to the ship, and leaves. Also, an envoy from the Station Governor arrives, explaining he needs speak with the crew leader. Group sets an appointment.

6. Along the way a trio of chilopteroids looking to collect a bounty unleash an Energy Eater on them. Fight ensues....it's a tough fight! But the group wins.

8. Group opens cargo hold 779. They find an immense crate, almost too large to store in their own ship's hold, and lots of additional crates of ship supplies. When they discern how to open the master crate it reveals a structure of crystal, silver, gold and platinum with an immense orb at the center. Dyvinil figures out how to feed it dark energy to power it up. It's a Mind Core to a Dark Star! And there's a notebook from Tesla Dane in the crate, too....she indicates her next quest goal: find a body for the mind core, leave it on this station for safe keeping in the interim.

9. The mind core reveals it is weak, and needs a proper body and power source, but imparts some data on what it is. Apparenly the Dark Stars created the first star knights...the first ascended species imbued with the power to manipulate dark energy. Those beings eventually mutated and became the Void Lords. The new generation of the star knights was created to destroy their predecessors. This mind core was a concientous objector....it turns out that such objectors are not appreciated, and the mind core was cast out in the area of the Serpent Nebula, a fate almost akin to death. Tesla Dane found the entity and recovered it.

10. Amidst this discovery, six Special Inquisitors of the Emperor himself show up and attempt to requisition the mind core. The group is suspicious, and a fight breaks out (except Tamralese, who leaves under orders of the inquisitors and heads to their ship like a good citizen). Sam pops ALL the grenades. The group survives but it was a tough battle.

11. Group heads back to ship. They manage to get the mind core stowed in their cargo hold. There are many mysteries to be answered:
--Why did the special inquisitors of the emperor show up and act so strange?
--What does the station governor want?
--Why did the Dark Stars exile this member of their species to the Serpent Nebula?