Ramping up on Realms of Chirak 2nd Edition 5E

You may have noticed fewer posts here recently. Aside from the uptick in work demands I've also been working on completing my draft of the Realms of Chirak 2nd edition for D&D 5th edition (especially now that we have an official OGL!) and that's coming along nicely....but it's also more work than originally planned as I'm doing a bottom-up rewrite, to both clean up errors and inconsistencies as well as update the setting to reflect the current timeline (I've run quite a few campaigns since 2008 and they've had a measurable impact on the state of the Realms of Chirak, as well as pushing the timeline ahead almost a decade).

Here's a sample from the way the cults & orders section is being revised. It's now presenting all data relevant to each Zodiac Stone in one section, then focusing on other cults, pretenders and philosophical orders in their own sections: 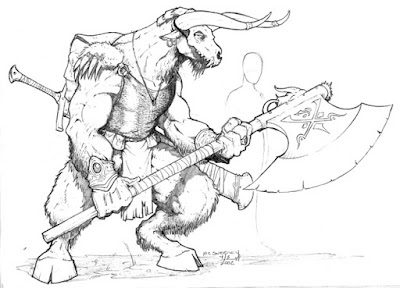 The divinities are almost universally chosen by happenstance: a lucky or hapless soul stumbles across a Zodiac Stone without a symbiotic bearer, waiting to bond. A few, such as Milina, were created early on and have existed for over two thousand years now as demiurges, unable to unite the shards of the respective stone or overcome their rivals to the point where a new true god would arise. Most are mystics (Kalie’Yana), scoundrels (Piscrael) or wanderers (Mardieur Mardiuex) who found their respective stones by happenstance and are still considered avatars. Mardieur Mardieux, for example, stumbled across the long-lost grave of the elven hero Itharian, who was an avatar of Akquinarios for centuries. Within that grave lie the Aquarius Stone, and the key to the divine path.

The Zodiac Stones are a unique force within Chirak. Each of the twelve stones comports to an astrological sign, which is in turn tethered to one of the twelve planetary bodies orbiting in the skies of Chirak. The mystical nature of the Zodiac transcends this realm, and the Zodiac as a power of prophecy and the divine is known by planar scholars to resonate throughout other planes of existence; but they believe that such a resonance originates with the World of Chirak itself.

The Stones are largely a mystery, but the most learned scholars of the current era, including certain Preservationists, believe that the Zodiac Stones are unique crystals which are attuned to a power called the Divine Wind. This is a physical manifestation of the divine energy of the world itself, which can be harnessed and turned into a godlike force. The stones allow this to happen….and without them, no divine power is otherwise possible in the world. So long as the Zodiac Stones continue to exist, the Divine Wind can be unlocked and harnessed.

A bearer united with a stone find that he can influence the divine magic awarded to his worshippers. The stones by default tend to reward belief that reflects the last active master of the stone, and if that master was a true god in status then the influence will run deep. Younger avatars and demiurges can begin to “overwrite” this influence with time, effort and meditation.

More about how the Zodiac Stones work will be described shortly. For now, what follows is an overview of each stone and the known entities –both alive and dead—associated with that stone.

Divinites of the Aquarius Stone

The Aquarius Stone is associated with the sacred power of healing and water, and has a strong association with principled goodness in morality. Made of jasper, the stone is mostly complete, but several shards are missing in the current era. Mardieur Mardieux, the current principle avatar of the stone, has recovered two shards, one of which he placed in his great axe to imbue it with additional power.
The Aquarius Stone ties to the constellation of the Water Bearer in the northern skies, and is tethered to the constellation of the Manta Ray in the southern skies. Followers of the stone’s divinities currently trend toward law and goodness, but that is changing, as Mardieur Mardieux is a neutral good minotaur and his influence is slowly coming to dominate the divine magic of the stone.
The Aquarius Stone has been in the possession of the following divinities:

Akquinarios
Regarded as the sacred god of life, water and goodness, Akquinarios was believed to have been the last true god to wield the Aquarius Stone. The stories of the old Final War suggest that he sacrificed himself at the very end to stop the world from being destroyed, but in doing so gave up his life force; in the form he had taken he manifested as an immense manta ray in the sky made of an entire sea’s worth of water, and on his death Akquinarios rained to the ground, flooding the old Mythric Empire in a great rain which did not end for weeks. When it was over, the Sea of Chirak had been formed in what was once the centerland of a vast continent on which the old Mythrics held their seat of power. Now…drowned ruins and a great inland land-locked sea.
Relics and ruined temples dedicated to Akquinarios are found all throughout the Kaldinian Isles, and his indirect influence remains as there are still cults which worship him, though they have recently begun to embrace his most recent successor, Mardieur Mardieux.

Queylinzar Itharian
Between the time Akquinarios perished in the Apocalypse roughly 2,500 years ago and the time Queylinzar Itharian found the Zodiac Stone, roughly 1,500 years had passed. Exactly how Itharian came to possess the stone is not certain, but stories suggest it was given to him by Kalie’Yana, who even than was a spirit of the Sea of Chirak, birthed some said from the residual magic of Akquinarios himself.
Itharian was a wandering adventurer and hedge knight of the Xernethian elves. He was born over 1,000 years ago into a diminished elven empire, a powerful but fading eastern kingdom which had suffered great losses and never recovered from the Apocalypse. Around five centuries ago he fell in battle against a never-ending hoard of goblins and orcs which all but annihilated the last of the old elven empires, and led to the enslavement of the first eradariin.
Legends of the Xernethians suggest that their safe mountainous woodland in the Dreamwood was forged out of the magic of the Aquarius Stone as used by Itharian. His protection, and sacrifice, mirrors Akquinarios in many ways, albeit tinged with the elven interests. It was not until five centuries later that his lost tomb was unearthed by Mardieur Mardieux, a wandering minotaur ranger.

Seminzal the Deeplord
Seminzal was an aquatic sahuaguin dwelling in the Sea of Chirak. He possessed a shard of the Aquarius Stone and used to rule his people under the guise of a god reborn. He had forged the shard into a weapon (a trident) which allowed for impressive power but never bonded with it. He was confronted by Mardieur Mardieux and slain in 647 EC, though some believe his cult may have attempted to resurrect him.

Mardieux Mardieur
The current living avatar of the Aquarius Stone, Mardieur Mardiex found the stone in the grave of Itharian in 645 EC and bonded with the stone by 647 EC, in time to destroy the resurrected spirit of the old betrayer god Minhauros (see more on this event under Minhauros and the Taurus Stone).
Mardieur began his life as a wayward minotaur of the Huron Tribes, serving as a mercenary and wandering ranger who arrived on his first sea voyage in Barcen, Espanea, in time to witness the theft of the Book of the Planes from the Librarium of the Preservationists by the arcanist Santana and his minions. Mardieur Mardieux became swept up in a series of events that escalated into the resurrection of a dead god, his own death and resurrection, the discovery of the Aquarius Stone, and ultimately his ascension as a true avatar.
Mardieur has only been a true avatar for about 12 years now, but he has gained a cult following thanks to his prominent role in freeing Barcen during the two-year war between Espanea and Nithiad, leading to the liberation of the city. His association with the old cults of Akquinarios restored a measure of faith in the lost god, and over the last decade numerous temples have been restored in both his name and that of his forebear (Itharian, alas, remains largely forgotten).
To live up to his newfound status as a cult figure and “living” divinity Mardieur Mardieux decided to seek out the other remaining shards of the Aquarius Stone, of which four remain unaccounted for that he knows of. He also decided to make a pilgrimage to the West, where he had heard the secret fate of the other fallen gods lay hidden. He disappeared near Pelegar in 648 EC, captured by the enigmatic otherworldly chaos lord Molabal, and did not reappear until he was freed in 657 EC, after which he resumed his journey West to distant Abraheil.

Other Aquarius Shards
Mardieur believes there are five other as-yet undiscovered Aquarius Shards in the world, and he has worked hard on techniques to sense their location. So far he has had luck with finding only one (Seminzal's) and the other four remain elusive. Whether they are dormant or have masters remains to be seen. He has also experimented with creating shards, removing a sliver of the stone and imbuing it in his great axe to forge a relic weapon.

Posted by Doctor Futurity at 7:30 AM