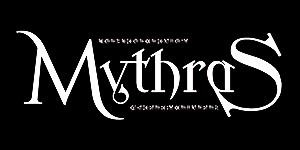 The Design Mechanism has announced that Runequest 6's name change will be Mythras going forward. The name is derived from "myth" and the deity Mitra/Mithras which is pretty cool. Announcement here.

They also have a preview of Classic Fantasy up for review (here). I admit, I wasn't a fan of the Classic Fantasy Monograph for BRP....it needed some work, and felt like a shoehorn of D&Disms into a BRP framework. That said, the preview for this new version has me intrigued, and hopeful as well that it will be more complete and focused (for example, it has a bestiary and treasure section, arguably important components of dungeon delving).

Part of me still feels like Classic Fantasy is an exercise in "missing the point" of BRP systems....but on the other hand, if it's done well then I really can't argue; a focused "refinement" of the RQ6/Mythras rules aimed at hitting that D&D sweet spot with a D100 system sounds kind of cool, actually. 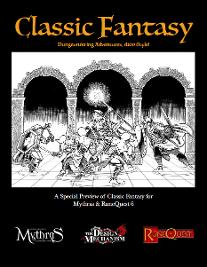 OH! And did I mention I like the font in CF? Let's hear it for normal fonts!
Posted by Doctor Futurity at 12:50 PM