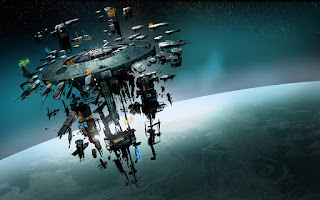 14 Curiosity-796
The otherwise mundane starport of Curiosity-796 is orbiting the moon Relic, another Spacer catalog anomaly. Evidence of a prolific civilization is defied by the fact that no living sentient remains to tell a tale of what happened when their entire civilization was seemingly extinguished—or kidnapped—twenty thousand years ago. Relic is favored by tomb hunters who love the place, but colony efforts have been troubled as the moon is saturated bio and nanotech which is debilitating to humans.

Curiosity-796 is actually part of the remnants of the Human Commonwealth, the vast independent disaspora of man that was shattered when the Void Lords arrived in the Milky Way. The station is one of a handful that still function in the Netherspace Sector, and it is protected by a loose picket fleet of independent privateers handled by self-appointed Commodore Andrej Markov, who vigorously defends the stations ostensibly libertarian open-door government.

Relic proper has a large Toho Megacorp colony called Osaka-Prime. Toho has been doing extensive nanotech research on the nanoviruses at Curiosity 796, which while note related to the Von  Neuman Plague directly may provide evidence on how to quell the well-known plague virus in other systems. For this reason Curiosity 796 and Relic both have no-entry quarantine requirements for ships that may have or been in contact with the virus….fear it gets loose on Relic and mutates are too great.

Encounters/Events:
1.       The Goliani prospector Tearson who was entrusted with Cargo Hold 779’s contents by Tesla Dane
2.       Cargo Hold 779 contains the Mind Core of a Dark Star!!!! Just needs power and a body.

3.       The Chilopteroid Warlord Gadastron, brother to Chiron, is docked at the station for R and R.

4.       Tesla Dane has enemies….and they know the ship. The Furies are the three sisters of darkness…..void knights who were turned star knights that have been hunting her; their spy, Emon Gloricam, a gray, will report the arrival of her ship and they will appear with an attack fleet in 48 hours.

5.       Port Governor Gav Tollis has news of Tesla Dane….she’s contacted him as recently as a month ago, from subsector 12, where the “missing system” of Arborea is located. Her transcript was brief: “Gav, tell them to find the idol of the Icumonitrox; they’ll find what they need there.” He assumes the crew of her former ship is the “they” she referred to.

(the following edited to avoid spoilers for my players...don't scroll over the redacted parts!)

6.       While in port, a stealthy cruiser from the Makamian Empire containing six assassins arrives, commandeered by Special Inquisitor Horus, specifically to assassinate the crew and uncover the mystery of Tesla Dane. They are here to protect the emperor from his original request to Captain Lars….as it turns out, Emperor Solvaros has been elevated by the Dark Stars and now controls dark energy as an immortal. His ascendance is what they seek to protect; they know Solvaros summoned Tesla Dane because he learned of her quest to answer the truth of the relationship between the Dark stars and the Void Lords, and they fear the answers (in truth,  Horus knows the answer: that the Dark Stars created the first Void Lords to be the original Star Knights, and that all Star Knights, given time, evolve into Void Lords….the young cull the ancient, essentially, in a never-ending war; they want the emperor to ascend and command both the Dark stars and the Void Lords!)