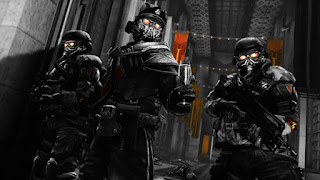 37 New Germanica
The colony of New Germanica was founded during early colonial expansion from mostly German spacers. They have developed starfaring technology over the last thousand years, and are now advancing in to the colonization of the system.  The current regime is a fascist xenophobic array of personalities who are preparing for “war” against the outsiders, i.e. the Makamian Empire and the Void Lords. The leader of New Germanica (NG) is Hans Grueller, a strong personality who is seen as a war hero, the man who “drove out” the Void Lords and refused a treaty with the star knights. New Germanica barely survived the Void Lord incursion a little over a decade ago, and had the Void Lords not began a retreat when the star knights arrived they would have been annihilated. The Void Lords retreated when the star knight fleet of the Lost Seven arrived, and it was through NG subterfuge that they did not detect the incomplete Void Lord technology left behind.

Resting at the edge of the star system is a monolithic structure, the Anti-Matter Wave Generator that the Void Lords were building to extinguish the system. The Empire of New Germanica has done all it can to keep the evidence of this weapon secret, and will do all it can to hide its existence, even as the New Germanican scientist pour over the device in an attempt to reverse engineer the technology hidden within, so they may complete the construction of the device. Early results have been successful in learning how to harness antimatter particles and store them indefinitely; these are now being converted into crude but incredibly dangerous weapons and raw sources of power.

The starships of New Germanica are only equipped with foldspace engines, so they have yet to expand beyond a few light years of space, but this has led to colonies on Remandalis, Habaris and Serpikus. They have deep space explorers moving slowly toward other star systems; part of their mission directive is to capture any advanced FTL technology, at any cost.

Capturing FTL Drive Tech: The NG has slow foldspace drive, so they can travel without relativistic effects but it takes years or decades to go a parsec or two. They have been trying to capture a working Transitional Drive for a long time, and try to lure “xenos” as they call all outsiders into traps to gain access to a working drive. However, they have a couple complications…

The Modified Von Neuman Plague: The NG was exposed by someone (possibly Tesla Dane!) to the Von Neuman Plague, which is a rampant nanovirus that destroys and assimilates any target it is programmed for; it was originally released on a remote colony called Last Call and spread rapidly throughout the old Triton Commonwealth, leading to that sector’s downfall. The version released in NG territory is designed specifically to target Transitional Drive technology, although mutational strains of the nanovirus have begun targeting bioforms again recently.

Zomborgs: Cyborg zombies are a plague in the NG’s “slums” where most non-eugenicized races live in squalor. The nanoplague occasionally mutates and resets back to its original condition, which is to convert bioforms into mechanical life and a machine hive intelligence. These zomborgs are like assimilants, but any physical contact requires a save or the individual in question contracts the nanovirus, which takes 3D6 weeks to slowly convert the organism into a man-machine hybrid slave of the hive mind. The goal of the hive mind is to expand indefinitely….it has no other purpose.

The commoners of NG think that the zomborgs are a product of the NG government, and their lack of response is due to the disinterest the government has in "unmodified" genotypes. They are half-right: scientists of the NG did, indeed, seek to modify the Von Neuman Nanovirus initially to stop it from destroying T-Space tech, but later they realized it had a "locked" programming which they tampered with, then exposed their test population to. It got loose....but so far the threat is regarded as nominal to a system with a massive overpopulation issue and an elite genetically "superior" aristocracy in control.

The Dark Matter Aliens: There’s a sophisticated effort in the dark matter realm, which is bridged only while in Transitional Space, to destroy vessels which try to leave the NG system. The dark matter aliens are called the Kerig, and they use a complex form of biomechanics for their ships. More on these, and their motives, later…. 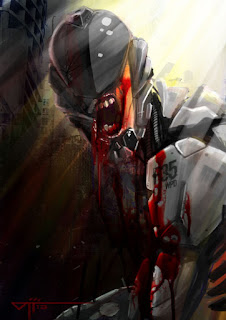