Here's a snippet of a possible future villain and plot in Realms of Chirak...as yet not realized, but the possible plot lingers for some future date. It's a bit complicated, however....and I've been favoring simpler scenarios lately, so who knows when I'll get around to exploiting it: 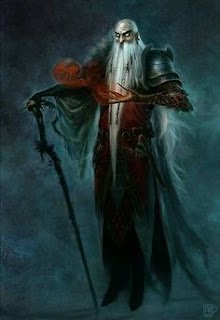 The cruel Masirian sorcerer-exile of Masiria, Haddaran Zamac has been living in the dominion of Nubirion for more than a century now. He was exiled from his homeland for the most grievous of crimes: the practice of chaos magic, entropomancy. In his secret mastery of this magic, Zamac stumbled across a dark secret about the nature of the old lord of chaos, Ga’Thon, and in doing so he discovered the secret of the dead god’s offspring, the Thousandspawn.

Zamac discovered that the Thousandspawn were immortal reanimates, godflesh given the semblance of life, and that the creatures were made “alive” by the tiny shards of the topaz Aries Stone, the divine source of Ga’Thon’s power. It was a clever means of surviving, Zamac realized….Ga’Thon had fractured his soul and his power into a thousand pieces, but it preserved his existence in the form of countless “offspring.”

As Zamac continued his research he delved deep into the nature of chaos magic, and began to explore the depths of the entropic magic. Zamac discovered that the source of the power came from the Far Realm, and in turn the Far Realm was the nebulous tether to the madness of a chaotic realm beyond which all of the universe was encompassed by. It was there that he discovered the “tunnels,” holes bored into reality from which the Far Realm propogated, and so it was that he saw fit to follow these “tunnels.”

Zamac discovered that the tunnels led to ancient Chaos Gods, the first and oldest such gods, beings of truly unimaginable power and might. These were gods in the truest sense; their point of existence was to destroy, to unmake the ordered reality of the world. As Zamac delved deep into the hidden corners of chaos, he realized that at least two of these beings had arrived in the mortal realm of Chirak in the dawn of time. One was called Molabal, and was trapped via the Pillar of Night in the dreamlands. The other creature had arrived and apparently been slain; it’s moldering corpse rested deep beneath the caverns and tunnels of the underworld below Nubirion. It’s body still resonated with power, he learned…though the beast had somehow been slain in some ancient prehistoric conflict with the Twelve, the flesh of the creature continued to hold unfathomable power.

Zamac was exposed for his vile thaumaturgy and cast out of Masira a century ago, but it suited him to do so, for he could continue to carry out his research, specifically in the land where he could learn the most about chaos magic. He traveled to Nubirion and took up residence for a time in the Yellow City before his experiments eventually forced him to migrate to Tedron, where he was able to remain to the present. In his time in Nubirion he forged a loyal group of servants, soldiers and followers, and spent decades delving into the depths of the earth in search for the body of the moldering lost Chaos God.

A decade ago, Zamac was at lat successful. The body of the dead god was immense, and filled a cavernous stretch for miles beneath the earth, beneath the Venedati Mountains. He found much more than just the corpse of a primordial old god, however: he also found Skazas, the Destroyer, first spawn of Ga’Thon.

Skazas was a formidable foe, and set thousands of years ago in the cavern by Ga’Thon to guard the secret of the Old God by destroying any who entered the cavern. Skazas sought to murder Zmac and his men, but Zamac had come prepared, thanks to his study of the Thousandspawn. Skazas was captured and bound to Zamac’s will.

Zamac then began the ritual, and partook of the flesh of the Old God, as he had now determined Ga’Thon must have. In so doing he realized that this process held the secret to Ga’Thon’s terrifying might at the end of the Final War, and may have accounted for his ability to forge the Thousandspawn at his moment of death.

Zamac survived the ritual, but he was forever changed, his flesh absorbed into chaos such that he was no longer himself, and his physical form was but a shadowy puppet in the mortal plane. The new Zamac realized his ambitions at the mastery of chaos magic, the discovery of Ga’Thon’s secrets, were pale shadows of the real truth. He was the offspring of a great, ancient destroyer called Sarvanilos: he was the inheritor of a power that was meant to undo creation, to bring to universe back into the folds of chaos. Though his “father” had perished tens of thousands of years ago, his destiny was the same: he could unmake reality.

It was Zamac’s companion, the gorgon Semilta, who brought him back from the brink. Her gaze no longer affected his corrupted flesh, but it calmed his madness, and brought back the man Zamac. His sanity restored with her gaze and touch, Zamac realized that the chaos magic he now wielded, if he could learn to channel it, would allow him to conquer the very world, and then remake it in the image he desired….exactly the same sort of power which Ga’Thon had once craved.

His only problem, he realized, was that the power to do so lay in the Zodiac Aries Stone itself. Ga’Thon held the stone, and it had been divided into a thousand shards. There must be a way, he realized, to reunite the stones, and to abolish the consciousness of Ga’Thon hidden within the flesh of the thousandspawn.

Zamac set about pushing to discover a way to do this. He learned in his research of an ancient order of wizards who had studied this phenomenon, albeit with the intention of imprisoning or destroying the Thousandspawn: The Order of the Grey Wren. He found out Lord Adan Nistur of Varkal was one of the members, and so he sought the man out. When he stole Nistur’s knowledge and memories, he turned then to the next on his list: Malenkin.
Posted by Doctor Futurity at 6:00 AM