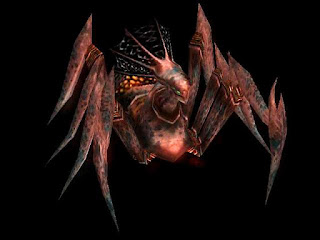 49 Blight
Blight was noted for its singularly unimpressive post-apocalyptic primeworld, the original name of which was long ago lost in favor of the scout’s nickname of Blight. On Blight rests the remains of an unknown civilization bombed back to stone age in what appears to be a genocidal war; debris in orbit and on the three moons of the planet clearly indicate they had progressed into space and were colonizing their system when the extinction level warfare took place. Now, the survivors of Bight are a handful of desperate wastelanders competing for precious resources with a large mass of mutated flora and fauna, a byproduct of biogenetic engineering for warfare and mutations from bioweaponry.

1. There is a strange orbital station/ship that looks like a vast, mirrored lens or saucer around Blight. It is defended by automated snub fighters, but may be friendly with the right approach. The vessel is run by a chilopteroid called Chiron, a race of ancient  near-immortal vampire bat-men. Chiron has arrived here from his home planet of Gleison, ostensibly to study the plight of the people of Blight; he represents himself as a benevolent god to them, and sends them on missions to gather ancient relics which he claims he is studying to determine what happened to the planet. In truth, he is implanting the natives with a red organic crystal, which he uses to sap psychic energy from the natives, feeding himself and his chliopteroid clan, and allowing them to continue with their indefinite life span. He is also secretly trying to find the Stellar Librarian (see below) which he believes contains the secret to true immortality.

2. A star cruiser from the Segurandi Dominion called The Infallible and piloted by the star witch Kalabretta (Mystic level 3; S 11 D 17 C 10 I 12 W 14 CH 18; HP 9, HD 2; AC 13, Attack 1, Star Sword +1 attack, 1D6+4 damage; ST 12; Meditations: invisibility, detect life, speed burst (gift); Mystic is in Between Star & Void, page 8). She has a dozen soldiers (WS page 80) in her service. She is investigating two issues: what the chilopteroids are up to (they are an enemy of the Segurandi Dominion and the witch queen in particular), and the recovery of a lost artifact: a Stellar Librarian. The Stellar Librarian is a holographic recording device that she believes is located in the ruins of one of the largest cities still standing on Blight, a haunted location which is overgrown with deadly flora and fauna. The Stellar Librarian may have been hidden here during the invasion of the Void Lords to save it from destruction, since the Void Lords tended to ignore already devastated systems. Kalabretta might be willing to hire the PCs to aid in its recovery, offering them 300 credits and the promise of an assist in the future if they need her help. 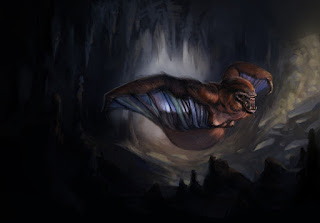 Chilopteroids of Gleison are six to eight feet tall, and resemble humanoid bats. AC 13, HD 3, Move 15 or 18 fly; attack 1 (claw 1D4) or laser pistol (1D6+2), ST 16, HDE 3/60; chilopteroids can become invisible at will as per the meditation; a chilopteroid with its blood crystal receptor will regenerate 1 hit point per turn, and leaving a body around will let it come back to life eventually; only destroying the body will stop the regeneration.)

Spider-Hunters prowl the ruins of Blight, looking something like a furry mammal combined with an arachnid, the Spidere-Hunters were unleashed on Blight to hunt down Chilopteroid enemies and escaped slaves. They are larger than mastiffs and have a vile poison. AC 14, HD 4, Move 12 (climb 12), attacks 2, claw/pincers 1D6+2 each, plus poison (Save or suffer paralysis and take 1D6 damage/turn for 1D12 turns as guts liquefy); ST 15, HDE 4/120

The Stellar Librarian is a cosmic inter-dimensional sentient probe from another universe. It can be attacked but is made of matter from another dimension and can only be temporarily disrupted, reforming 1D12 hours later after HP reach zero. It can impart knowledge to those who desire it, releasing a small black globe which when absorbed requires a save; if the target fails, then the subject is cocooned and gains the abilities but begins to slowly transform into strange matter from another dimension (more on what this means soon!). Effects that can be granted include: gain a new skill (if using skill abilities), wild talent psionics (if using Psionics supplement), a meditation or even something more exotic at GM’s discretion. AC 18, HD 12, HP 42, Move 20 (levitation), attacks: none; the Stellar Librarian is pacifistic, but it can engage in a probe for 200 feet; targets must make a save, and on failure the Stellar Librarian knows all data on the subject; Chilopteroid nervous systems tied to blood stones are disrupted by this for 1D6 turns, and may affect unshielded cybernetics in the same way; ST 7; HDE 2,000

Zunathics are also other-dimensional energy beings, and are also made of a strange matter which fluctuates in an indeterminate matter/energy state. They can take any form (the one with the Stellar Librarian appears as a unicorn made of cosmic stardust….yes, that is right). Zunathics can absorb 50 points of energy damage before further damage disrupts their form; physical damage has no effect (but see below); if one is reduced to 0 HP it is disrupted and reforms 1D12 hours later. AC 19, HD 8, HP 28, Move 12 (18 running), Attacks 1, Particle Beam Horn 4D6 damage and make a save or take 2D6 damage for 1D4 additional rounds; Special: any physical attack striking the zunathic forces the attacker to make a saving throw; failure means the object is disintegrated or the creature takes 8D10 damage (and is disintegrated if hitting 0 HP); ST 11; HDE 8/800 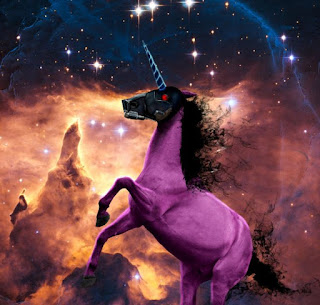