Today's entry relied on the random system generation tools in "Five Year Mission," which is a cool sourcebook for White Star adding more stuff in to support Star Trek/Firelfy/Farscape style campaigns, including some great classes. 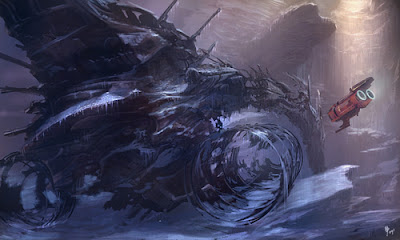 Anomolously high number of navigational hazards and black holes, possibly tied to ancient superweapons created by a dead race 1.2 million years ago. The spacetime distortion is severe in this sector, but stretches out over nearly a dozen neighboring sectors to a lesser extent.

The Vaparak Nebula (26, 36) a, a by-product of the Twin Dark stars, two black holes spiraling toward one another.

One of the last sectors invaded and overrun by the Void Lords. Since abandoned during the Void Lords’ retreat, but not yet claimed by Makamian Imperial Naval forces.

Each hex is one parsec (3.26 light years) across. In any given hex there will be 1D6-2 additional uninhabited/unexplored star systems with no Terran-like worlds.

Since this is an active, ongoing campaign I will provide details on the map only after they have been explored in-game. 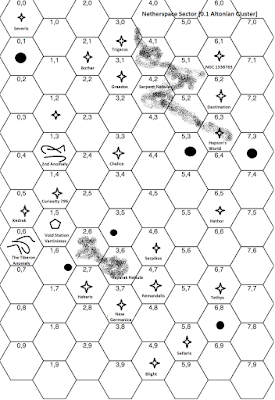 58 Sellaris
Environmental collapse due to nuclear warfare and a xenocidal assault led to the abandonment of this system, leaving behind complex ruins of an old starfaring empire. The Sellarians were a pre-starfaring race of red-skinned humanoids with six fingers, and many survivors were seeded on a half dozen other worlds by an unknown benevolent species prior to the xenocidal attack by the cannicks 6 centuries ago that extinguished their homeworld. The cannicks used nukes to wipe out the military opposition, then moved in close and personal because they never pass up a chance to take a direct hand in exterminating sentient biologicals.

1. The genocide was caused by a cannick invasion force which arrrived using wormhole stargate technology. It is possible to find cannick "sentries" left behind to insure no repopulation of the world by sentients, as well as several still functioning stargates. These gates open up into a cannick colony world in another region of the sector (more on that later).

2. There's a survivor from a salvage expedition living in one of the major city ruins named Samaros (see prior write-up for his backstory); Samaros is a Sellaric male; S 13 D 15 C 16 I 14 W 9 CH 13; 11 HP ; 2 HD; AC 13 (light armor, gas mask).  He has salvaged a lot of equipment, including a translator chip injection unit from a disastrous quinlon scouting expedition.

3. On the outer edge of the system the quinlons have a listening post and refuelling station. The quinlon dreadnaught Conquering Fist is currently being refueled there. The station is broadcasting data back every 32 hours to the quinlon empire; when it fires up the transmitter array it leaves a brief series of high energy pulses visible throughout the system.

4. Quinlon scavengers in service of the empire have been picking over Sellaris Prime...carefully. They've lost several scouting ships and so the empire has effectively subcontracted the work to private salvagers. They regard the cannick as a curiosity, one they want to figure out how to enslave or exploit, but they don't want to draw attention to the empire if it turns out the cannick are a real threat, so they've exercised a lot of caution. There's a 30% chance of seeing a quinlon salvage ship or light cruiser in the system near Sellaris Prime, and a 50% chance that it might be planning to land.
Posted by Doctor Futurity at 6:00 AM